Carbon release, storage by rainforests may increase by 50b tons for each degree of climate warming in the tropics 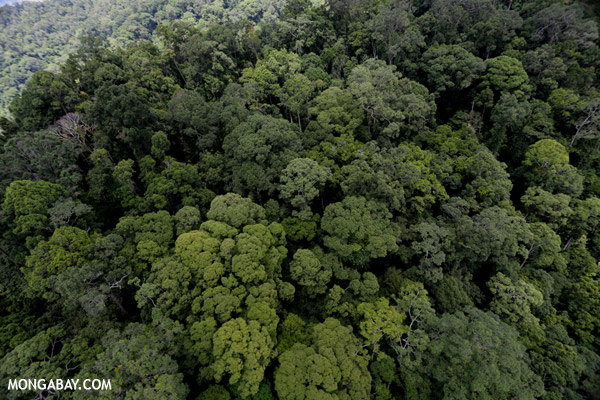 Faster plant growth due to higher concentrations of carbon dioxide may offset increased emissions from forest die-off in the tropics, asserts a new study based on climate modeling.

The research, published this week in the journal Nature, looks at how year-to-year variations in CO2 levels effect the long-term rate of carbon storage in tropical forests. It found that previous models may have overestimated the likelihood of forest die-back by assuming excessive variability in CO2 levels, while underestimating increased growth from CO2 fertilization. The study concludes that while tropical forests globally may release 53 billion tons of carbon for every degree Celsius of warming, they are likely to absorb a larger amount of carbon through more rapid growth.

“Fortunately, this carbon release is counteracted by the positive effects of carbon dioxide fertilization on plant growth under most scenarios of the 21st century, so that overall forests are expected to continue to accumulate carbon,” said lead author Peter Cox of the University of Exeter. Cox was also the lead author of a widely-cited 2000 paper that argued the Amazon was vulnerable to large-scale die-off by 2050 due to global warming.

However the paper did not incorporate the effects of deforestation and forest degradation, which can increase the incidence of drought, fire, and tree mortality. Nor did it factor in other greenhouse gases like methane, which warm the climate without boosting plant growth rates.

“We have been struggling for more than a decade to answer the question ‘will the Amazon forest die back under climate change?’ Our study indicates that the risk is low if climate change is associated with increased plant growth under elevated carbon dioxide,” said Cox. “But if this effect declines, or climate warming occurs due to something other than a carbon dioxide increase, we expect to see a significant release of carbon from tropical ecosystems”.

“The long-term health of tropical forests will depend on their ability to withstand multiple pressures from changing climate and deforestation,” added Chris Jones of the UK Met Office. “Our research has shed light on the former, but the latter remains a significant pressure on this ecosystem.”

The paper comes on the heels of other research suggesting that remote parts of the Amazon — far from deforested zones — are already experiencing large-scale die-off due to drought, the effects of may last years. Meanwhile another Nature study, published last November, warned that trees worldwide are more vulnerable to drought-stress than previously thought.