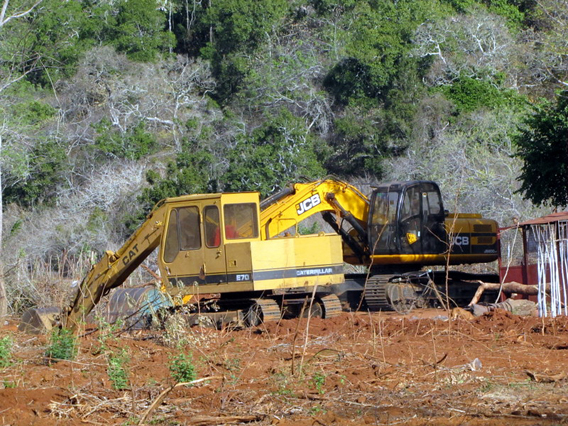 Clearing of elephant habitat at the edge of Yala National Park in Sri Lanka. Photo courtesy of the Environmental Foundation Limited (EFL).

“This is going to be a permanent cultivation within the home range of few elephant herds,” Vimukthi Weeratunga, Environmental Foundation Limited (EFL)’s head of operations and environmental scientist, told mongabay.com. “When we take the elephant land by developing this area, elephants will move to nearby villages to raid crop as they cannot use this area for their normal activities. This is exactly the way that human-elephant conflict increased in the other parts of Sri Lanka.”

The site in question is currently used by smallscale farmers for cattle and farming, but Weetatunga says that this doesn’t mean the ecosystem degraded. Instead, he says smallscale farming and livestock in the area are actually important for elephants as opposed to a monoculture plantation.

“Shifting cultivation is a traditional farming practice by clearing some scrubland and leave after the harvest for forest to re-grow. This practice is ideal for elephants to thrive as they get high quality fodder after people leave to regrow,” he explains. Between 2,000 and 4,500 Asian elephants (Elephas maximus) roam Sri Lanka’s forests. The species is currently listed as Endangered by the IUCN Red List.

The area in question is home to many other species as well, including leopards, fishing cats, sloth bears, pangolins, and a large variety of birds.

Many have noted in Sri Lankan press the irony of destroying elephant habitat, including forest lands, for so-called green energy made from biofuels. Gliricidia is a woody plant that can be burned in a biofuel power plant.

The Environmental Foundation Limited (EFL) is currently awaiting a court date next month with Lanka Orex Leasing Company over the habitat clearing.

“We are asking [for an] injunction of current activities,” Weetatunga says. “We are also seeking compensation for their action if we win the case.”

Last year, environmentalists in Sri Lanka caught U.S. food giant Dole clearing forest in Somawathiya National Park for a banana plantation. Dole denied it was inside the park for months, but finally abandoned the project after threat of lawsuit.

Like many Southeast Asian countries, Sri Lankan is currently undergoing a tension between large-scale industrial projects, such as monoculture plantations, and local farming and conservation efforts. 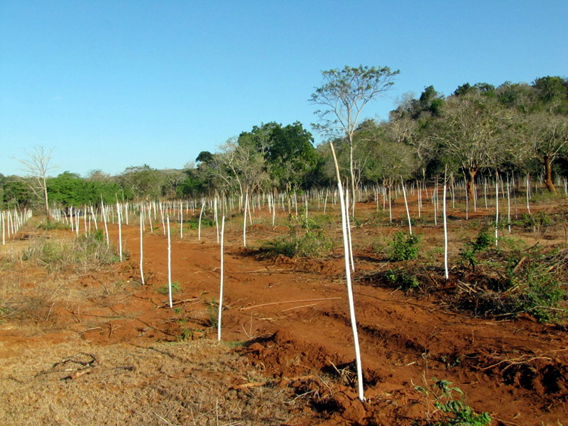