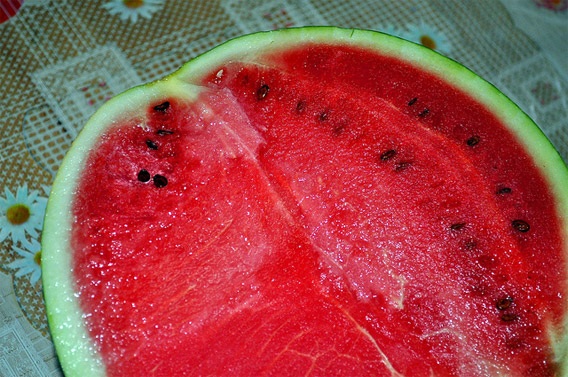 A hard, white, and bitter watermelon has plant geneticists licking their lips with anticipation.

The size of tennis balls, wild watermelons grow natively in southern and western Africa. Geneticists cracked open this small relative to the juicy, summertime treat to extract ancient genetic material. They are mining the fruit’s DNA for useful traits such as disease resistance that cultivated, or domesticated, watermelons have lost.

An international team of more than 60 researchers, led by Zhangjun Fei at Cornell University’s Boyce Thompson Institute for Plant Research, sequenced and published the domesticated watermelon genome for the first time in late November in Nature Genetics. Sequencing a genome provides a description of all genetic material in any plant, animal, or living organism.

“It’s much simpler to breed new traits,” Fei said, once you analyze a plant’s genome.

The genome that arrived to Fei’s lab in Ithaca, N.Y. for analysis was sequenced in the Beijing Genomics Institute.

“When you get the sequence, it’s just combinations of AGCT, but you need to process them and connect them together into a whole chromosome,” Fei said. His team constructed the chromosome and then cross-referenced the domesticated melon’s genome with 20 wild watermelon genomes to see which genes had been lost over time.

Fei isolated genetic material that dropped out of the cultivated melon’s genome during the selective breeding process, hoping to find genes that protect a watermelon from diseases like Fusarium wilt, a fungal enemy that threatens many crops. Of the many genes in the wild watermelon that are missing in the domesticated fruit, Fei identified 10 as candidates for making the supermarket favorite more resistant to plant diseases.

Another team member, plant geneticist Amnon Levi at the United States Department of Agriculture’s Vegetable Laboratory, said breeding for only a few trait in the domesticated watermelon, to make it big, pink, and sweet, created a genetic bottleneck.

“To my surprise I discovered there is very little genetic diversity,” Levi said of heirloom varieties in the United States. “Even though size of melon and seeds, and colors are different, when you look at whole genome, there is very little diversity.” This makes the genetic material in the wild African watermelon even more valuable.

Using genetic sequencing to breed new traits into the watermelon is quicker than traditional breeding methods. Fei said the number of years it will take to cultivate more desirable melons with sequencing technology is half that of older techniques. Once his team identifies a marker for disease resistance on the ancient melon’s genome, it is simple to check a new strain of melon for the same marker and know whether or not it will hold up to certain plant pests.

A plant pathologist at the University of Florida who was not part of the watermelon sequencing team, Pamela Roberts, agreed that the sequenced genome will quicken the process of breeding for new traits in the domestic watermelon.

“Having a genome is a tremendous resource for anybody that is trying to do watermelon work,” she said. For Florida growers combatting Fusarium wilt, Roberts said right now the solution is to leave land where the Fusarium fungus infects the soil. Breeding resistance to the devastating fungus might allow watermelon growers to stay on their land instead.

Besides creating a heartier watermelon crop, geneticists and breeders hope to make a sweeter and more nutritious melon. One way a watermelon might be more nutritious is increasing the fruit’s concentration of lycopene, a red pigment whose consumption is correlated with reduced likelihood of cancer and heart disease. Additionally, sequencing the watermelon, which is native to the desert, may provided helpful genetic material for working on drought resistance in plants, according to Levi.

“The watermelon is quite sophisticated,” Levi said. Breeding for disease resistance, he said, is “just the beginning.”

Emily Eggleston is a graduate student in geography and journalism at the University of Wisconsin-Madison.