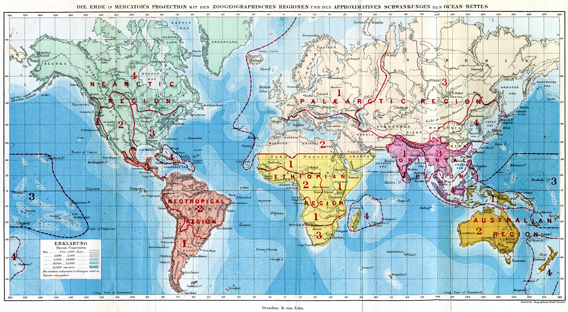 In 1876, British biologist Alfred Russell Wallace published a map of the world that outlined how related animals were spread over the Earth. For example, Wallace was the first to publicize that North American biodiversity was substantially different from South America, and that an invisible line separated Southeast Asian biodiversity from that of Australia, New Guinea, and nearby islands. With Wallace’s research came the founding of biogeography, or the study of species in relation to geography. Today, scientists with the University of Copenhagen have updated Wallace’s map—nearly doubling the number of biogeographic realms—with support from data on over 21,000 species.

“Our study is a long overdue update of one of the most fundamental maps in natural sciences,” lead author of the new research in Science, Ben Holt, said in a press release. “For the first time since Wallace’s attempt we are finally able to provide a broad description of the natural world based on incredibly detailed information for thousands of vertebrate species.”

With vast amounts of data, including DNA sequencing, the scientists have created new biogeographic realms, such as the island of Madagascar which is home to lemurs, tenrecs, mini-chameleons, and slew of other bizarre species. Still, much of Wallace’s original map survives, such as the split between North and South America, and the line—known as Wallace’s Line—separating Southeast Asia and Australia. However, the new study also splits Australia from New Guinea, creating a new biogeographic realm known as Oceania which includes New Guinea and other islands across the Pacific.

“The map provides important baseline information for future ecological and evolutionary research,” explains co-lead-author, Jean-Philippe Lessard, at McGill University in Canada. “It also has major conservation significance in light of the on-going biodiversity crisis and global environmental change. Whereas conservation planners have been identifying priority areas based on the uniqueness of species found in a given place, we can now begin to define conservation priorities based on millions of years of evolutionary history.”

Well-known as the “father of biogeography,” Alfred Russell Wallace was also a consummate explorer and write; spending years in the Malay Archipelago and the Amazon, he wrote extensively on wildlife, ecosystems, and cultures. Wallace even conceived the theory of evolution independent of Charles Darwin, and it was an essay by Wallace on the mechanics of evolution that finally spurred Darwin to write his landmark book, the Origin of Species.

This new global map shows the division of nature into 11 large biogeographic realms and shows how these areas relate to each other. Map by: University of Copenhagen. Click to enlarge.

(11/02/2012) Scientists have created an evolutionary maps for all the world’s nearly 10,000 bird species. The ‘tree of life’ is published in the current issue of the journal Nature.

(04/30/2007) A comprehensive survey of lizards on islands around the world has confirmed what island biologists and seafaring explorers have long observed: Animals on islands are much more abundant than their counterparts on the mainland.