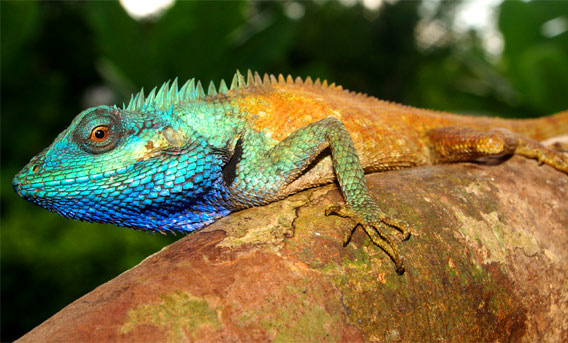 German and Russian biologists have discovered a stunning new species of lizard in Vietnam. The species, dubbed Calotes bachae, is described in a recent issue of the journal Zootaxa.

Calotes bachae is a type of agama, a group of lizards commonly known as “forest dragons.” It was described after DNA research led by Timo Hartmann, a PhD candidate from the Museum Koenig in Bonn, Germany, revealed it was genetically distinct from another blue lizard species found in Myanmar and Thailand. In other words, it is what scientists call a cryptic species — one that has been hiding in plain sight.

Calotes bachae is not particularly rare nor difficult to find, according to the zoologists.

“To observe the new species no exhausting march into the remote rainforests of Vietnam is necessary. These lizards seem to have arranged themselves well with humans, even in the centre of the metropolis Ho Chi Minh City one can find them within parks and flower beds”, said study co-author Peter Geissler, also a PhD candidate at Koenig. 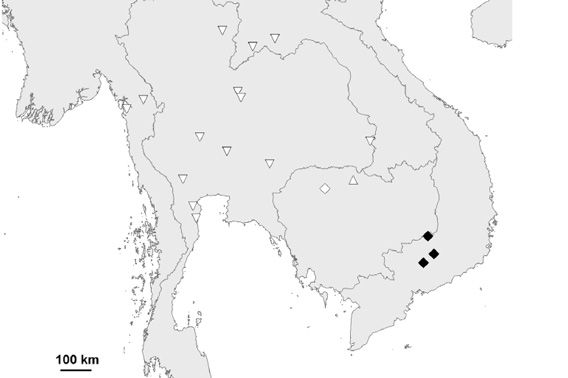 Map showing sites (black diamonds) where Calotes bachae was collected as well as sites (white markers) where the closely related Calotes mystaceus is found. There are at least 23 species in the Calotes genus. Courtesy of Hartmann et al. (2013).

Calotes bachae is a small lizard, measuring up to 4 inches (10 cm) in length. Like many other agamids, males are characterized by bright colors during the mating season. Females and juveniles are drabber in coloration. Both males and females are capable of changing colors to better match their surroundings. For example at night, Calotes bachae is typically dark brown. 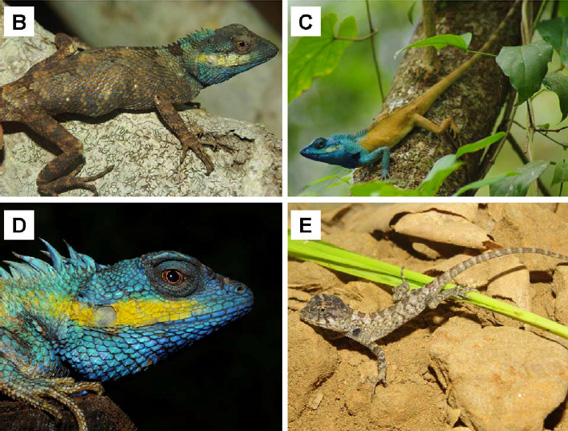 The discovery provides another example of the utility of new tools like DNA-barcoding in distinguishing species, according to Nikolay Poyarkov, another co-author of the study.

“The full species richness of our planet is not nearly recorded yet”, added Rödder, Head of the Herpetology Department at the Museum Koenig.

Hundreds of previously unknown species have been discovered over the past decade in the Mekong region. Last week Australian scientists announced the discovery of a giant flying frog, also from Vietnam.

(12/19/2012) Researchers in Australia have described three new lizard species from the northwestern part of the continent.

(10/23/2012) The wild blue iguana population has increased by at least 15 times in the last ten years, prompting the IUCN Red List to move the species from Critically Endangered to just Endangered. A targeted, ambitious conservation program, headed by the Blue Iguana Recovery Team, is behind this rare success for a species that in 2002 only numbered between 10 and 25 individuals.