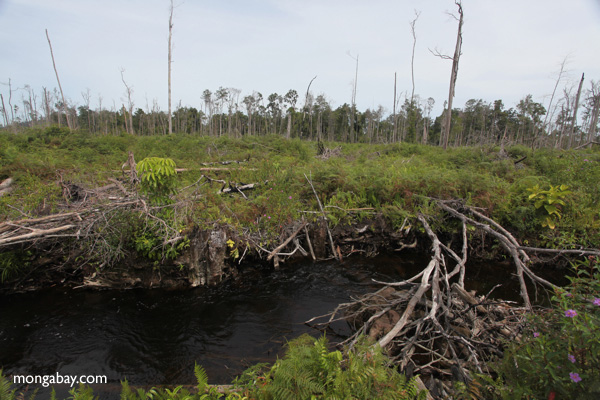 Degradation of peat swamps for oil palm and timber plantations is a substantially larger source of greenhouse gas emissions than previously believed, finds a new study published in the journal Nature.

An international team of researchers tested the water chemistry of channels draining peatlands in Malaysia and Indonesia. They found high levels of “ancient” carbon, indicating that peat swamp degradation releases carbon that has been locked away for thousands of years. Much of the carbon eventually makes its way into the atmosphere, contributing to climate change.

“We first noticed that the ditches draining areas converted to palm oil plantations were loaded with unusually high levels of dissolved carbon back in 1995, but it was not until my researcher Dr Tim Jones took samples to measure the age of that carbon that we realized we were onto something important,” said study co-author Chris Freeman of Bangor University.

“We were amazed to discover that the samples from Malaysian oil palm plantations contained the oldest soil-derived dissolved organic carbon ever recorded,” added Jones, also of Bangor University.

The authors estimate that accounting for carbon carried away by drainage canals adds 22 percent to the total carbon dioxide emissions from peatlands degradation, which was already known to be a major source of greenhouse gas emissions.

The results indicate that conversion of peatlands for plantations is even worse for climate than previously believed, according to the authors.

“Our results are yet another reminder that when we disturb intact peatswamps and convert them to industrial biofuel plantations, we risk adding to the very problem that we are trying to solve” said Freeman in a statement: “We have known for some time that in South East Asia, oil palm plantations were a major threat to biodiversity, including the habitat for orang-utans, and that the drainage could release huge amounts of carbon dioxide during the fires seen there in recent years. But this discovery of a ‘hidden’ new source of problems in the waters draining these peatlands is a reminder that these fragile ecosystems really are in need of conservation.”

Oil palm and pulp and paper plantation development increasingly occurs on peatlands, especially in Indonesia, where such areas often have fewer land claims and therefore easier to secure from local officials.

(12/09/2010) Speaking at a high-level event on the sidelines of climate talks in Cancun, Mexico, financier and philanthropist George Soros made an impassioned call to protect Indonesia’s peatlands, the destruction and degradation of which are the largest source of carbon dioxide emissions across the Southeast Asian nation.

Plantations on peatlands are huge source of carbon emissions

(11/04/2010) Asia Pulp & Paper is misrepresenting the greenhouse gas emissions generated through its paper production by several orders of magnitude claims a new analysis of its carbon footprint by the Rainforest Action Network (RAN) and the Japan Tropical Forest Action Network (JATAN).