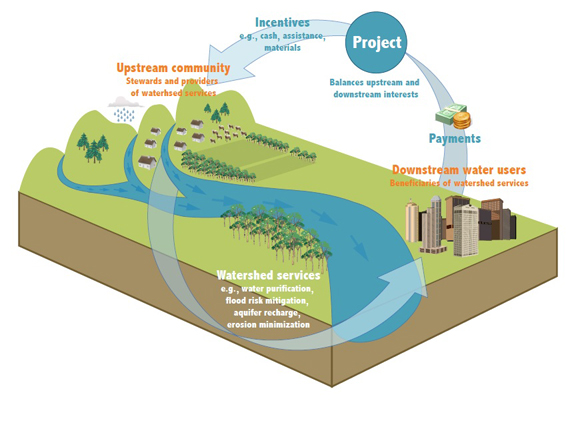 How a sample payment for ecosystem services project works. Click to enlarge.

Unlike cars, hamburgers, and computers, clean drinking water is a requirement for human survival. In a bid to safeguard this essential resource, more and more nations are moving toward protecting ecosystems, such as forests, wetlands, and streams. In fact, according to a new report by Forest Trends’ Ecosystem Marketplace, nations spent $8.17 billion in 2011 to secure freshwater by conserving watersheds.

“80 percent of the world is now facing significant threats to water security. We are witnessing the early stages of a global response that could transform the way we value and manage the world’s watersheds,” Michael Jenkins, Forest Trends President and CEO, said, adding that natural resources investment is “the most cost-efficient and effective way to secure clean water.”

Intact forests and wetlands act as natural filtration systems, allowing rainfall to make it to populous areas with little contamination and therefore cutting the costs of bringing water to the public. Intact watersheds provide other benefits, as well, such as storm and flooding buffers, habitat for wildlife, fisheries, and carbon sequestration.

The Forest Trends report found that the number of programs has nearly doubled since 2008, from 103 to 205. For example, New York state has begun compensating farmers in the Catskills to reduce pollution into local waterways that provide drinking water to New York City. China has begun trading health benefits for land-use changes in rural communities above the city of Zhuhai. Meanwhile, beer companies in Uganda and Zambia have paid for wetlands protection in order to secure clean water.

“The level of activity is far more intense than it was just a few years ago when we began tracking these types of investments,” Jenkins said.

Still, the report found that the private sector was lagging behind when it came to protecting watersheds. Only a quarter of the programs involved the private sector—mostly beverage companies—while the rest were undertaken by NGOs and governments.

Investment in watersheds is one strategy among the increasing use of payments for ecosystem services (or PES). PES involves the creation of financial incentives to safeguard healthy ecosystems, which provide a wide-range of so-called free services like pollination, erosion protection, pest control, and, of course, water.

(12/05/2012) This summer, while climate change silence reigned in the U.S. presidential race, the Stockholm International Water Institute’s conference for World Water Week focused on the global initiatives required in order to live with its effects. The report, titled “Feeding a Thirsty World,” garnered the most publicity with the assertion that agricultural water scarcity and an increasing population would force the world to reduce average meat and dairy consumption down to just 5% of all calories by 2050. At present, 20% of the average human diet is made up from animal proteins.