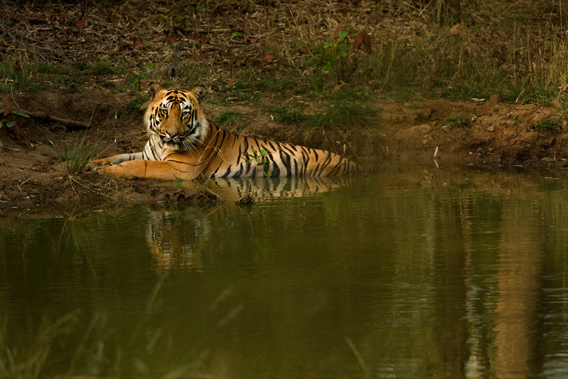 During an average year, 87% of households surrounding Kanha Tiger Reserve in Central India report experiencing some kind of conflict with wild animals, according to a new paper in the open-access journal PLOS One. Co-existence with protected, free-roaming wildlife can be a challenge when living at the edge of a tiger reserve.

“Local residents most often directly bear the costs of living alongside wildlife and may have limited ability to cope with losses” wrote the authors of the new paper, “Assessing Patterns of Human-Wildlife Conflicts and Compensation around a Central Indian Protected Area.” For example, the study finds that farmers in the region report losing on average $90 USD every year to crop loss, this in an area where the average annual income is $517 per household. To make conservation and conflict prevention more effective for people and wildlife, the international team of researchers set out to assess and map perceived conflict and compensation to households around Kanha National Park in Central India.

The Kanha Tiger Reserve is one of India’s most well known Tiger Reserves, supporting carnivores such as the Bengal tiger (Panthera tigris tigris), leopard (Panthera pardus) and wild dog (Cuon alpinus), and many herbivores. Despite the presence of free roaming, large, and dangerous wild animals, people live and farm in and around the protected area (PA).

“Kanha is atypical of most Indian PAs because the administrative buffer gives it a lesser hard edge than other PAs and livelihoods of people living in the buffer fall within the purview of park management,” wrote the study authors, adding that “the presence of a buffer provides an opportunity to compare conflict experienced and compensation effectiveness among households within and outside the buffer.”

“Compensation distribution for households located in the administrative buffer is higher than households located outside indicating some positive influence of management inside the buffer,” wrote the study authors, illustrating how buffer areas foster cooperation between locals and park officials in managing co-existence with wildlife.

Forming a clearer picture of how these conflicts were playing out across the landscape was the main goal of the study. To that end, the researchers mapped and statistically modeled the types and frequency of human-wildlife conflicts and related compensation that occurred in a 20 km radius near the park. They focused on two common types of conflicts that occurred between 2010 and 2011: crop and livestock losses. The mapped results reveal hotspots and patterns of conflict and compensation both in and around the park. 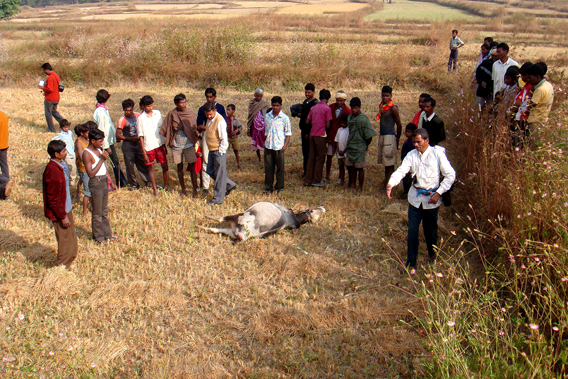 Since animals don’t conform to legal boundaries, the results also show that, if not well-designed, a park buffer area is not always useful at preventing or predicting sites of conflict. Problematically, many high-risk villages on the map are located outside the park boundary and buffer area and are, therefore, less likely to be compensated for losses.

“Spatial modeling…suggests that households located closer to the PA have higher risk regardless of location within or outside the administrative buffer,” wrote the study authors, adding that “as consideration is currently under way for designating buffers around other protected areas in India, our results from Kanha suggest that compensation is more likely to be distributed to those who suffer losses if the administrative buffer is designated to include more susceptible locations for crop and livestock loss.”

Lead author Dr. Krithi K. Karanth told mongabay.com that this type of analysis is important for conflict prevention efforts because the stakes are literally life and death: “retaliation was rare but was strong when people were killed or injured.”

To understand local experiences, in October 2011 Karanth’s team, including 35 citizen science volunteers, spoke with local residents (93% of whom are engaged in agriculture) from 735 households in 347 villages within a 5,154 km2 area surrounding Kanha. They surveyed these residents about their backgrounds, their conflicts with wildlife in the past year, whether they reported these conflicts, what prevention measures were taken, and whether compensation was received for wildlife-caused losses.

Karanth told mongabay.com that “feelings towards parks are generally positive” and “people do value the parks and attribute several services and benefits to parks.” Furthermore, she explained that conflicts and negative attitudes “are more towards the park management as restrictions on resource use such as grazing, collection of fuel wood-fodder-non timber forest products lead to conflict situations.”

The causes of conflicts are many. Crop loss was associated with greater number of cropping months per year and proximity to the park. Livestock loss was associated with grazing animals inside the park and proximity to the park. Among prevention measures only the use of protective physical structures and guard animal reduced livestock and crop loss.

“Blind investment in mitigation activities should be replaced by targeted and focused strategies that work at the individual household level,” wrote the authors in their paper.

Park service and government officials are tasked with keeping the peace between animals that stray outside park boundaries and farmers by working with residents to resolve issues such as livestock and crop losses. One effective way to soften attitudes towards wildlife is to compensate farmers for their losses after officials assess the extent of damage. In their paper, the authors explain that “improving compensation distribution are important for conservation efforts in landscapes where people and wildlife co-occur outside protected areas.”

The authors note that while compensation is important, the proper distribution across space is contested. Because wildlife conflicts are naturally more frequent just outside protected areas, the authors write that “this raises important questions about who is responsible for compensating local people for wildlife damage outside the jurisdiction of PAs and park authorities.” In other words, deciding if compensation is warranted and who should pay is often complicated and contentious. 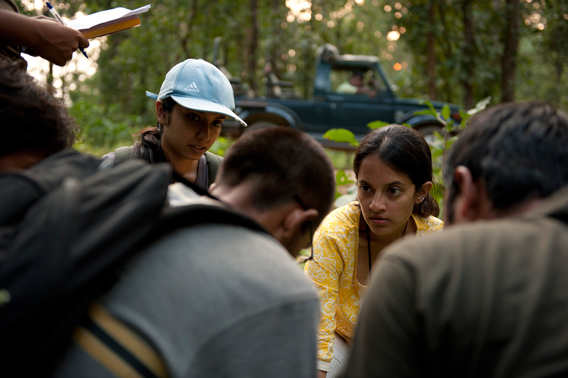 The disparity of compensation may be a result of differences in reporting from residents based on the type and severity of the conflict.

“People often talked about accepting the losses, particularly from animals such as pigs, which frequently raid but the losses are small,” Karanth told mongabay.com. “In these instances the paper work to file compensation costs a lot of time and money and the compensation amounts do not reflect this. So people choose to let these losses go. It’s only when they lose livestock, get hurt, or killed, are more efforts invested in being compensated.”

Because “preventing conflict and improving distribution of compensation are important to fostering co-existence in landscapes that surround protected areas and function as critical buffers for wildlife,” the authors suggest that co-existence can best be realized by the delineation of buffers and other management strategies “based on ecological and economic realities.”

When designed well for both people and animals, wildlife management and parks like Kanha can succeed. Though imperfect, there are many positive lessons to draw from Kanha’s wildlife management approaches, including utilizing buffer areas of compensation. Most promising is the working model of people and nature living together in and around the reserve where, despite heavy and regular losses to crops and livestock, Karanth told mongabay.com that “people are largely tolerant of many conflict incidents,” adding that she heard from many people that “these shared areas were as much the home of wildlife as theirs.” Perhaps such a vision of a shared landscape may serve as a great blueprint for the future of conservation.

Leopard poaching is a bigger problem in India than previously believed

(10/31/2012) A recent study conducted by wildlife trade monitoring group TRAFFIC uncovered unnerving statistics about the illegal trade of leopards (Panthera pardus) in India: at least four leopards have been poached every week for the past decade in the country. The study, entitled Illuminating the Blind Spot: A study on illegal trade in Leopard parts in India, highlights the severity of leopard poaching from 2001 to 2010, despite preventative measures established in 1972 by the Wildlife Protection Act (WLPA) that prohibit the sale of leopard parts in India.

(10/09/2012) To prevent conflicts between humans and elephants in developed areas, a new study shows there is much to learn from analyzing Asian elephant behavior at the individual level as opposed to population studies. Researchers have traditionally interpreted elephant behavior at the population level, looking for behavior patterns among elephants of similar ages, group sizes, and genders. Today, field researchers in India are studying elephant behavior at the individual level. Their goal is to appreciate the idiosyncrasies of individual elephants in the hopes of predicting their behavior. Nishant Srinivasaiah, of the Tata Institute of Fundamental Research and lead author of the study, told mongabay.com that it is vital “to get to know our elephants more intimately than ever before and, more importantly, to shift our focus from a population to include its individuals as well.”

Tracking elephants in Cameroon to mitigate conflict with locals

(07/09/2012) Elephant conservation is imperiled by poor spatial planning, according to a new study in mongabay.com’s open access journal Tropical Conservation Science. Tracking two elephant matriarchs in and around Bénoué National Park in Cameroon, scientists found that the herds spent over half their time outside of the park, highlighting the potential for human-wildlife conflict as elephants are known to raid fields.