Landmines, chains, and hope: the elephants of Thailand 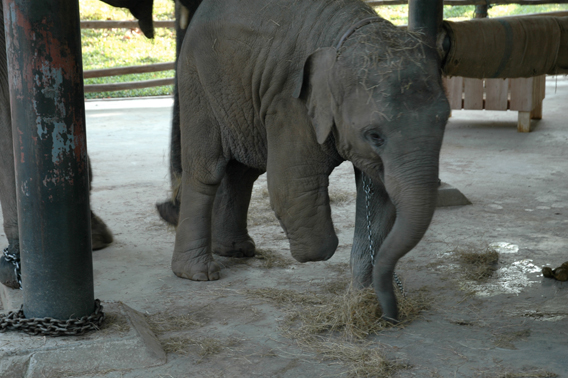 Baby elephant who lost apart of her leg to a landmine. Image courtesy of Donald Tayloe.

Few animals draw more compassion and awe from people than elephants. Highly intelligent, deeply social, and touchingly sensitive, elephants have much in common with human beings, despite their size and shape. Yet elephants around the world are still often abused and mistreated, whether to entertain tourists or as victims of human strife. A new film, The Last Elephants in Thailand, sets out to document both the good and bad that elephants encounter in a world dominated by homo sapiens.

The film, produced Donald Tayloe and Michelle Mizner, looks at the various ways humans either hurt or help Asian elephants (Elephas maximus) in Thailand, including building a prosthetic for an injured calf at an Elephant Hospital, painfully–through beatings and cages–forcing elephants to paint, pressing elephants into servitude for tourists’ amusement, and highlighting a sanctuary for rescued elephants that focuses not just on elephant rehabilitation, but also on educating people.

The Last Elephants of Thailand is making its New York City premiere Friday, February 1 at the 3rd Annual New York Wildlife Conservation Film Festival. Ahead of its premiere, Tayloe answered some questions from Mongabay.com about the film and his career. A longtime physician, 70-year-old Tayloe jumped into the project headfirst, picking up recent college-graduate Mizner, who he’d never met before, along the way. The result has been award-winning, including Best Documentary Short at the 2010 San Antonino Film Festival and Best Conservation Film at the 2010 Venice Green Screen Film Festival.

Trailer for the Last Elephants of Thailand.

AN INTERVIEW WITH DONALD TAYLOE

Donald Tayloe: I am a physician at the Veterans Hospital in Fresno California.

Donald Tayloe: This is the first film that we made. I was 70 years old, and Michelle had just graduated from College. I had heard about this Elephant Hospital in Thailand, since I was a physician, I just went and bought a camera off the shelf and was ready to go when I met Micelle for the first time and asked her to go along. She majored in film and she said OK. We had never met before.

Mongabay.com: Why did you these elephants as the topic of your film?

Donald Tayloe: I am an animal advocate, and here were injured and sick elephants in a hospital. 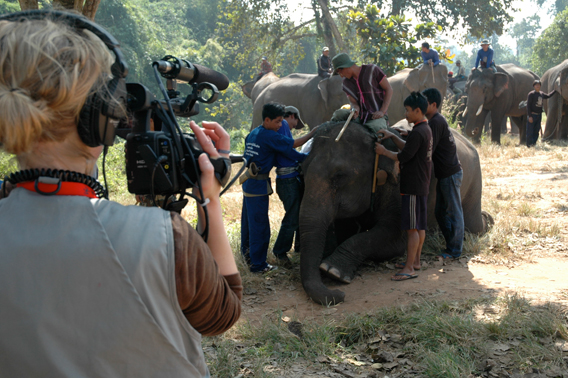 Donald Tayloe:There are many plots, the treatment of elephants who have had their feet blow off by landmines, elephants begging in the streets of Bangkok, the day to day activities of the hospital, and a part about an elephant sanctuary: “Elephant Nature Park” in Thailand. Finally and very important is the torture elephants have to endure to learn to “paint.”

Donald Tayloe: The actual filming and being there.

Donald Tayloe: I hope this film will bring to the publics attention the desperate trouble elephants are in.

Donald Tayloe: Our film as been shown all over the world. We have been in over 20 film festivals. Our web site is: www.thelastelephants.com. We have over 15,000 hits on youtube.

Mongabay.com: How did you come to work with WCFF?

Donald Tayloe: We had come together years ago because of the mutual interest in the environment and animals

Donald Tayloe: I am working on a project about an elephant called “Sissy.” Michelle is a full time producer. We would like to make another film about elephants in zoos. 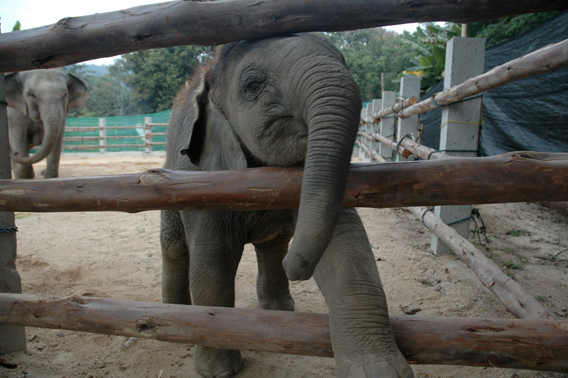 ‘The ivory trade is like drug trafficking’ (warning graphic images)

(11/05/2012) For the past five years, Spanish biologist Luis Arranz has been the director of Garamba National Park, in the Democratic Republic of Congo (DRC). Arranz and a team of nearly 240 people, 140 guards among them, work to protect a vast area of about 5,000 square kilometers (1,930 square miles) of virgin forest, home to a population of more than 2.300 elephants that are facing a new and more powerful enemy. The guards are encountering not only bigger groups of poachers, but with ever more sophisticated weapons. According to Arranz, armed groups such as the Lord’s Resistance Army from Uganda are now killing elephants for their ivory.