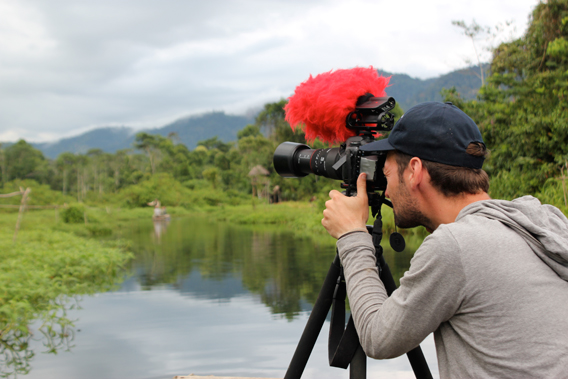 A new series of short films is celebrating the innovation of rural farmers in the Manu region of Peru. Home to jaguars, macaws, and tapirs, the Manu region is also one of the top contenders for the world’s most biodiverse place. It faces a multitude of threats from road-building to mining to gas and oil concessions. Still the impact of smallscale slash-and-burn farming—once seen as the greatest threat to the Amazon and other rainforest—may be diminishing as farmers, like the first film’s Reynaldo (see below), turn to new ways of farming, ones that preserve the forest while providing a better life overall.

“Reynaldo uses an agroforestry method that works a lot like permaculture. He understands how each crop can affect the other in a beneficial way. By growing lots of different crops together he can ensure that nitrates are fixed in the soil, that crops are shaded and protected from wind damage,” says co-director Nick Weber of his new short film about Reynaldo. Werber and colleague, Dan Childs, are working with the Crees Foundation to document community changes, such as agroforestry and planting fruit and vegetable gardens for better health.

Werber and Childs, who lived in the Many region for three months, will produce four films in the series and are also working on other films about the area.

AN INTERVIEW WITH NICK WERBER

Mongabay.com: What was it like living in Peru’s Manu region for three months, one of the most biodiverse places on Earth?

Nick Werber: Living in Manu was Amazing. Waking up in the middle of the rainforest every day to the sound of Monkey calls and Oropendolas was a magical experience.

Mongabay.com: Slash-and-burn farmers are sometimes described as the ‘enemy’ by activists. Why is this view wrong?

Nick Werber: These people are really just trying to survive. Most of them are poor and just want to feed their families. The issue is education. When the farmers know that there is a different way to farm that helps them and preserves their environment, they change their practices.

Mongabay.com: Will you tell us about Reynaldo’s approach to farming in the Amazon?

Nick Werber: Reynaldo uses an agroforestry method that works a lot like permaculture. He understands how each crop can affect the other in a beneficial way. By growing lots of different crops together he can ensure that nitrates are fixed in the soil, that crops are shaded and protected from wind damage.

Mongabay.com:
How does it allow him to avoid slash-and-burn agriculture?

Nick Werber: Slash and burn farming and monoculture farming exhaust the soil. Agroforestry replaces the nutrients in the soil by using nitrogen-fixing crops. The trees also help by providing shade and preventing erosion. This stops the need to move to new land every few years.

Mongabay.com: Besides the fact that the trees Reynaldo plants sequester carbon and provide a home for biodiversity, how do these trees help Reynaldo’s
crops?

Nick Werber: The trees provide shade for the crops, which is helpful considering the strength of the tropical sun. They also help prevent soil erosion and the hard wood trees provide a wind barrier in the rainy season.

Mongabay.com: The Crees Foundation is also working with local people to improve their nutrition. Will you tell us about these efforts?

Nick Werber: A major problem for the people of Manu is malnutrition. The current inhabitants of towns like Salvacion are migrants from the high Andes. Their diet is low in fruit and vegetables, which leads to malnutrition and illness, especially in the young. Reynaldo and the Crees foundation begun a ‘bio garden’ program in 2008 helping teach local families how to grow their own vegetable gardens year round, giving them a chance at a better diet and a sustainable income through the sale of the excess. They get expert training, help building the garden and receive advice throughout the year. Crees and Reynaldo’s vision is that in order to protect the forest and its diverse wildlife you need to engage the people in better practices which serve their needs and the forest alike.

Mongabay.com: Why should people care about what happens in Manu?

Nick Werber: Manu is like a microcosm for issues affecting rainforests across the world. It is incredibly beautiful and has a wonderful biodiversity but it is under threat from local farmers, oil companies, mining and migration. The recent completion of the Trans American Highway has opened up the area to more people and industry. The Manu biosphere reserve, one of the largest protected areas of rainforest in the world has come under further threat last year with the Peruvian government allotting mining concessions that will inevitably lead to further deforestation and pollution of the rivers. By educating and engaging local people we will have a population that sees the value of the forest and will have an active interest in its protection. Recent research has studied the effects of microclimates in Borneo where weather patterns and rainfall have been restored once barren areas of forest have been replanted.

Mongabay.com: The shots in your film are stunning. How did you capture these?

Nick Werber: I teamed up with filmmaker Dan Childs using a Canon 7D and 550D. By using these DSLR’s We managed to create cinematic films on a low budget.

For 3 months Dan and I lived in the rainforest, filming every day in searing heat and dense humidity capturing a range of wildlife on film, including Macaws, Tapirs and Monkeys. We filmed volunteers getting out of bed at 5am to check small mammal traps and survey the Macaw activity at the clay lick, and helped plant trees with Reynaldo, the star of this film.

Mongabay.com: This short film is the first in a series of four. Will you let us know
a little about what to expect from the other three? When will they be
available?

Nick Werber: This is the first of the Crees Heroes films and there are a few other people in Manu we would like to talk about which we hope to film soon. We also made films covering the foundations scientific research projects and their volunteer program.

Mongabay.com: What is the purpose of this film? What would you like people to do?

Nick Werber: We want to show that despite all the bad news about the rainforest and conservation across the world that there are some amazing people like Reynaldo who are talking real action and making a positive impact. We would like people to feel that they can help by offering to be a volunteer in Manu or donating some money to help Crees develop their agroforestry and community projects.

Permaculture: a path toward a more sustainable Amazon?

(05/03/2012) Communities living in and around tropical forests remain highly dependent on forest products, including nuts, resins, fruit and vegetables, oils, and medicinal plants. But relatively few of these products have been successfully commercialized in ways that generates sustained local benefits. When commercialization does happen, outsiders or a few well-placed insiders usually see the biggest windfall. Large-scale exploitation can also lead to resource depletion or conversion of forests for monoculture-based production. The ecosystem and local people lose.