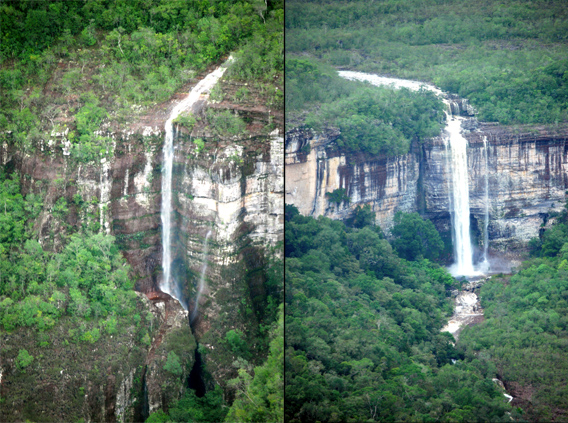 Waterfalls in Chiribiquete. Photos by Mark Plotkin of the Amazon Conservation Team

Colombia may more than double the size of the remote and poorly-known Chiribiquete National Park to make it the biggest protected area in the Colombian Amazon, reports El Espectador.

Under a proposal laid out last year, Colombia’s national park service is slated to expand Chiribiquete to about 3 million hectares, up from its current 1.3 million hectares. The park, located in southern Colombia, was established in 1989 and is home to more than 300 bird species, 7 monkey species, and 300 butterfly species.

Chiribiquete best known for its unusual rock formations, including mesa-like tepuis and dramatic waterfalls, but also features at least 32 cave painting sites with some 250,000 drawings, making it a key center for indigenous culture. The expansion would incorporate territories of two “uncontacted” indigenous groups that live in voluntary isolation from the outside world, according to Diana Castellanos, an official with the national park service. 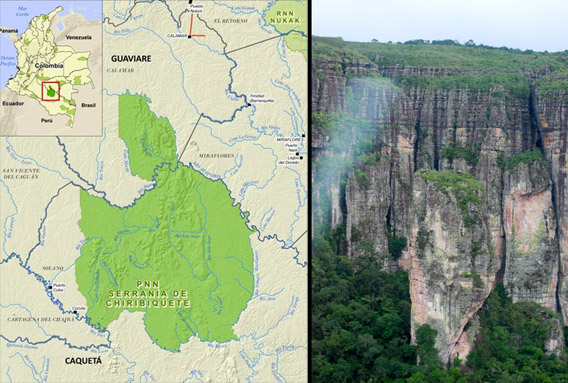 Liliana Madrigal of the Amazon Conservation Team (ACT), a group that works with indigenous groups in Colombia to preserve the country’s forests, said the move is a “win-win” for Colombia’s stunning cultural and biological diversity.

“The plan to expand Chiribiquete is great for Colombia,” Madrigal told mongabay.com. “Chiribiquete already protects an enormous wealth of flora and fauna, but its enlargement now also will facilitate the protection of voluntarily isolated indigenous peoples that are believed to inhabit the park and help ensure their right to remain uncontacted.”

The announcement of Chiribiquete’s expansion comes a year after the passage of Decree #4633, which requires the government to set aside land used by voluntarily isolated indigenous groups. The decree “makes explicit reference to protecting isolated indigenous peoples from unwanted contact,” according to ACT.

Chiribiquete’s expansion plan has been approved by a group of seven indigenous groups that live around the park. The Ministry of Environment is now negotiations with the Ministry of Mines on how to handle areas currently zoned for oil exploration. The parks service however expects a decision by March, according to Castellanos.