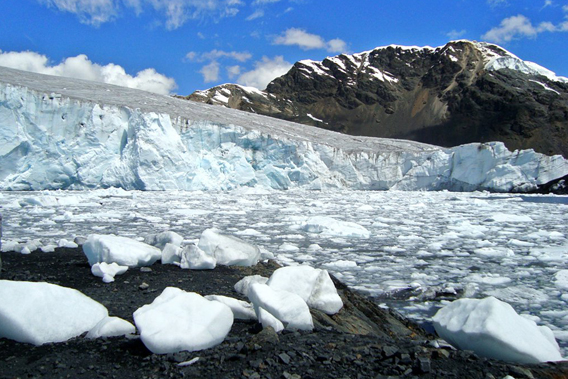 Glaciers are melting faster than ever in the tropical Andes, warns a new study published in The Cryosphere, which puts the blame for vanishing glaciers squarely on climate change. The study — the most comprehensive to date — found that since the 1970s glacier melt in the region has been speeding up, threatening freshwater supplies in Peru and Bolivia.

“The ongoing recession of Andean glaciers will become increasingly problematic for regions depending on water resources supplied by glacierised mountain catchments, particularly in Peru,” the scientists write. They note that freshwater supplies in Peru’s Santa River Valley as well as in Bolivia’s capital city, La Paz, will likely be imperiled as glaciers vanish.

The scientists looked at precipitation changes over the last century in the region, but found that it could not explain the current melting, which they describe as “unprecedented.” Instead the glaciers are melting due to rising temperatures from climate change: regional temperatures have jumped by 0.7 degrees Celsius (1.26 degrees Fahrenheit) during the last fifty years.

Not surprisingly, the scientists say that small, low-altitude glaciers are currently most at risk of disappearing as temperatures rise.

“Because the maximum thickness of these small, low-altitude glaciers rarely exceeds 40 metres, with such an annual loss they will probably completely disappear within the coming decades,” said lead author Antoine Rabatel, researcher at the Laboratory for Glaciology and Environmental Geophysics in France.

Climate change is having a massive impact on the world: from earlier springs to melting Arctic sea ice and from rising sea levels to increasing extreme weather. Yet despite increasingly urgent and dire warnings from scientists, governments, and global institutions like the World Bank and the International Energy Agency (IEA), global greenhouse gas emissions continue to climb and international efforts to cut emissions move languidly at best.

“This study has been conducted with scientific motivations, but if the insight it provides can motivate political decisions to mitigate anthropogenic impact on climate and glacier retreat, it will be an important step forward,” Rabatel says.

(01/02/2013) In the western U.S., few trees generally grow in higher altitudes than the whitebark pine (Pinus albicaulis). Providing shelter and food for bears, squirrels and birds, the whitebark pine ecosystems also help regulate water flow from snowmelt. But, according to a new study in the Proceedings of the National Academy of Sciences (PNAS), climate change has produced a novel threat for these high-altitude forests : mountain pine beetles (Dendroctonus ponderosae).