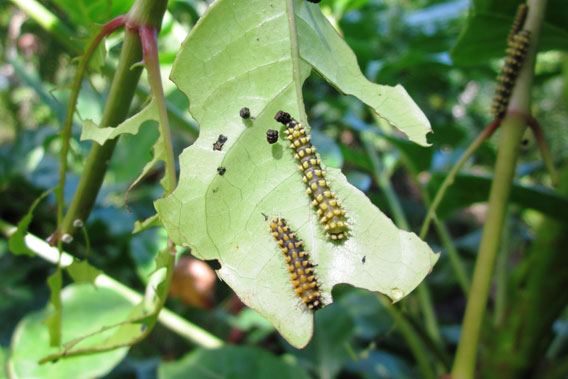 Poaching is a major threat to endangered lemurs in some parts of Madagascar, but a group has come up with an innovative solution to the problem: replace lemur meat with silkworm pupae, a byproduct of silk production.

The Pupae for Protein (P4P) program, developed by the Madagascar Organization of Silk Workers (SEPALI), aims to address multiple problems for communities around Makira Protected Area in Northeastern Madagascar: poverty, environmental degradation, and lemur poaching. The concept is simple: generate sustainable livelihoods from silk production using native silkworms. Sell the byproduct — silkworm pupae — as a source of protein in communities that already have a tradition of eating insects. The result: incomes improve, less forest is cleared for slash-and-burn agriculture, and lemurs live to see another day.

Insects are a traditional food in Madagascar and are particularly important in rural communities during the lean period. Farmers who produce 4000 cocoons (1 kilo) can provide about 4 kg of protein to their children, the equivalent of one red-ruffed lemur, a highly endangered species previously hunted in the Makira Protected Area from which farmers have been displaced. Edible pupae could provide additional income as well as food. For example, six species of sun-dried Saturniidae larvae sold in Zambian markets in 2003 yielded $52/11.5 kg thereby returning greater profits than other types of agriculture produce.

SEPALI is currently working in a dozen communities. It hopes to introduce the Pupae for Protein soon.