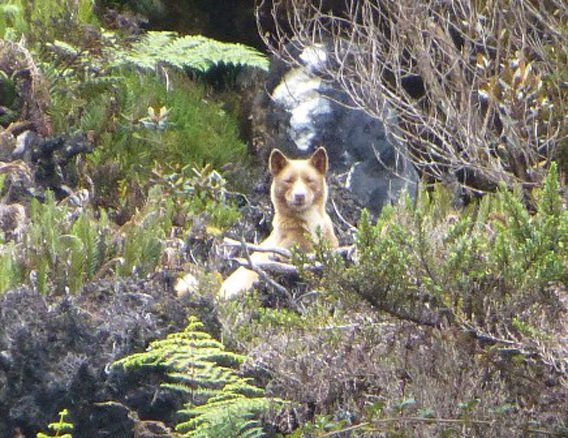 Cropped close-up of New Guinea singing dog. This is arguably the first time the dingo-like canine has been photographed in the wild. Photo by: Tom Hewitt.

A rarely seen canine has been photographed in the wild, likely for the first time. Tom Hewitt, director of Adventure Alternative Borneo, photographed the New Guinea singing dog during a 12-day expedition up a remote mountain in Indonesian Papua. Very closely related to the Australian dingo, the New Guinea singing dog, so named for its unique vocalizations, has become hugely threatened by hybridization with domesticated dogs.

“When we reached [our guide and cook] the guide proclaimed ‘dog,'” Hewitt writes in a blog entry about his trip up Mandala Mountain. “This took me quite by surprise and it took three explanations by him for me to understand. But sure enough above us on the rocky outcrop in the bush there was a dog—the guide seemed as bemused by it being there as we were. […] We watched it for around 15 minutes as it continued to watch us. It seemed as curious as we were but not particularly scared or nervous. What stood out was how healthy it looked upon closer examination with binoculars.”

Hewitt’s sighting is the first report ever of a New Guinea sighting dog in the region. Described as looking like foxes, due to reddish coats, the dogs are known for an ability to climb trees.

“At the time of the sighting we were in a dramatic, wide valley with 4,000 [meter] peaks and limestone walls with waterfalls on either side,” Hewitt continues. “We spent a total of 4 days camping in this valley and there was regular contact with a number of exciting animals: couscous, possums and even tree kangaroos were seen most days, as well as many unidentified ground nesting birds living in the swamp grass. One species of bird of paradise was heard in the lower forest, but not seen. There were a few highland flowers and grasses and occasional groves of an ancient cycad species—primordial in every respect.”

No one knows how rare the New Guinea singing dog has become, but in addition to being imperiled by breeding with domestic canines, the species is also hunted by locals. It is killed as a competitor and often eaten. Almost nothing is known about its life in the wild. 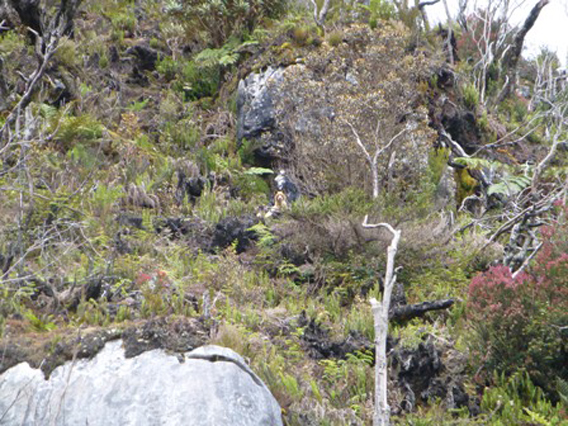 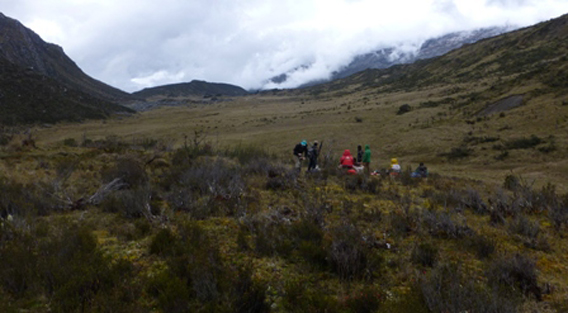 The valley where the New Guinea singing dog was photographed. Photo by: Tom Hewitt.