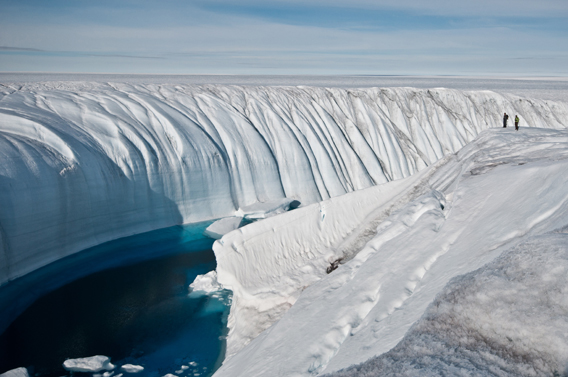 Over the course of several years, turbulent water overflow from a large melt lake carved this 60-foot deep canyon. Note the people for scale. Photo by: Ian Joughin.

A massive team of scientists have used multiple methods to provide the best assessment yet of ice loss at the world’s poles, including Greenland and a number of Antarctic ice sheets. Their findings—that all major ice sheets are shrinking but one; that ice loss is speeding up; and that this is contributing to the rise in sea levels—add more evidence to the real-time impacts from global climate change. Melting ice sheets at the poles have raised sea levels 11.1 millimeters, or about 20 percent of observed sea level rise, in the past twenty years, according to the landmark study in Science.

“It provides a simpler picture,” said co-author Benjamin Smith, a research scientist at the UW’s Applied Physics Laboratory. “In the 1990s, not very much was happening. Sometime around 1999, the ice sheets started losing more mass, and probably have been losing mass more rapidly over time since then.”

The rate of ice loss in Greenland has jumped five-fold over the past two decades, while changes in Antarctica have been more variable, but still trend toward total and increasing ice loss. Only East Antarctica may be seeing some gain in ice, but the estimated range could also mean the ice sheet there is either stable or melting a little.

The major study—with 47 authors—has settled some of the uncertainty surrounding ice sheet loss at both poles by combining three different ways that experts in the past have studied polar ice loss, including imagery from ten different satellites. However, the scientists say more long-term monitoring will be required to note just how quickly ice sheets are responding to warming oceans and atmosphere.

“We are just beginning an observational record for ice,” explains another co-author Ian Joughin, a glaciologist in the University of Washington’s Applied Physics Laboratory. “This creates a new long-term data set that will increase in importance as new measurements are made.”

Scientists have been particularly surprised by the fact that ice sheet decline is speeding up.

“We don’t fully understand why it’s accelerating,” Joughin adds. “But the longer-term observations we have, the more solid predictions we will be able to make.”

Climate change is pushing sea levels higher through a variety of impacts, including melting ice sheets, glaciers, and the fact that warmer water physically expands. A study last week found that sea levels were rising 60 percent faster than predicted by the Intergovernmental Panel on Climate Change (IPCC) at around 3.2 millimeters every year. Our rising oceans are already exacerbating storm surges worldwide and flooding some low-lying islands and coastal regions. The only way to slow rising sea levels is to slash global greenhouse gas emissions, according to experts.

Government representatives from around the world are currently meeting in Doha, Qatar for the annual UN Climate Summit. The UN, the World Bank, the International Energy Agency (IEA), and scientists worldwide have all warned that governments need to considerably scale up their ambitions in greenhouse gas cuts in order to have any chance of keeping global temperatures below the 2 degrees Celsius agreed on target. In the first week of the conference there was little sign of progress towards greater cuts.