From catastrophic to the sustainable: the flight of the Amur Falcon 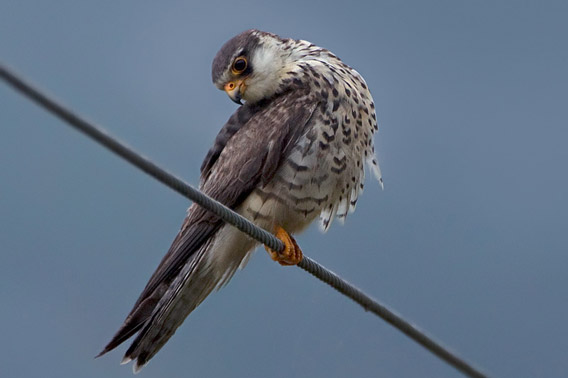 It is said that the price of “freedom and justice” is constant vigilance. It seems the same
can be said of conservation and sustainability in our ever changing world. In a story and
allegory appropriate for many of the challenges that face our global environment, two
Indian conservationists — Shashank Dalvi and Ramki Sreenivasan have stepped to work
with a host of international and local interests to help save one species of beleaguered
bird, the Amur Falcon of Eurasia. Shashank is an alumni of the postgraduate Wildlife
Biology and Conservation (run by WCS in India and the renowned conservation leader Dr
Ullas Karanth), Ramki is the co-founder of Conservation India – a one-of-its-kind portal to
enable conservation action.

An interview with Shashank Dalvi and Ramki Sreenivasan

Mark Szotek for Mongabay: Please tell our readers about the Amur Falcon and the trials that this species faces during its annual migration.

Shashank Dalvi: The Amur Falcon (Falco amurensis) is a graceful pigeon-sized insectivorous raptor that breeds in Siberia and China but migrates all the way to winter in eastern and southern Africa, year after year. It has one of the of longest migrations among all birds and the longest for any raptor — flying about 22,000 km annually. Migrating Amur falcons fly even at night and across vast oceans. Enroute they stop in Northeast India and Bangladesh to fatten up before staging for overland flights across peninsular India. Subsequently, they cross the Indian Ocean to East Africa non-stop over 3,000 kms, flying day and night. This falcon is an “elliptical migrant” because its route back home is largely overland to the northwest of its southbound route.

During migrations these beautiful falcons have been recorded as targets of both sport and commercial hunting in China and India for over a century. The mass trapping of these bird recorded in Wokha, Nagaland, that we recorded this season involved killing of an estimated 120,000 – 140,000 falcons, a scale that is shocking and never documented before.

Such mass slaughter if unchecked will surely doom the species. No one should have the right to do so.

Mark Szotek for Mongabay: You mention that falcon’s slaughter is centered around commercial harvesting of this species by the local people of India’s Nagaland. Is this a traditional activity of this region? When did this local market for the falcons develop?

Ramki Sreenivasan: No, this is not traditional practice. While there is a significant local and “traditional” hunting of wildlife often to the point of extirpation is a factor in Nagaland and many parts of South East Asia, the Amur falcon killings are recent and driven by greed of making a “fast buck”, opportunistically, while the birds migrate in huge numbers. When we interviewed hunters and village elders, we found they remembered these mass migrations for over 50-60 years. Whereas earlier they had used catapults or guns to kill and eat a few birds, the present mass-trapping is more recent.

The Doyang Hydroproject reservoir was created in the year 2002. According to the hunters since then the reservoir has attracted falcons to stop over and roost in the area in these huge numbers. We speculate that large number of insects such as dragon flies that breed in the reservoir may be rich and predictable source of food for the migrating falcons craving for fat reserves for the long journey to Africa.

This sudden increase in number of roosting birds (vs. just birds in passage) post 2002 has triggered the large-scale slaughter of the falcons. Hunters have figured an opportunistic and highly effective way of mass trapping by literally enveloping the entire roosting area with huge nets erected vertically. Over time, the demand also seems to have grown – not just locally, but across the region.

Mark Szotek for Mongabay: Have there been any efforts by governmental authorities to curtail this activity?

Ramki Sreenivasan: Look, hunting is totally banned by law in India for at least three decades. However, what happens when implementation of the law is poor is another matter. However, there still is hope.

However, there still is hope. The government is this case has acted swiftly at all levels.

Mark Szotek for Mongabay: What do you feel should be done? For example, should there be more local educational outreach?

Shashank Dalvi: We think multiple conservation actions are required to stop this massacre over the longer term:

Mark Szotek for Mongabay: There has been growing global movement to tie conservation with the rights and traditional practices of indigenous people. Is this an example of blindly protecting the rights of the locals leading to (ironic and) unsustainable practices that are working against this same community? Ie. if the falcon population collapses, the harvest will end. What then?

Ramki Sreenivasan: We believe that model is excessively simplistic and flawed.

Most forest areas in northeast India (as well as in rest of SE Asia) are owned and managed by the local communities and it is well known that because of massive hunting these are now “empty forests”. Even traditional hunting has decimated animal populations in these areas and the situation worsens when the hunting turns commercial, which invariably follows. Tropical forests across the world face this problem but it is really bad in this area. We need to recognize this basic reality and not get lost in wishful thinking.

Of course, the Amur Falcon killings in Nagaland cannot be termed as “traditional” in any way. The scale is huge and shocking and is driven completely by commercial interests.

Mark Szotek for Mongabay: Using the falcon as an example, how would you propose blending the “traditional” with updated practices that focus on sustainability?

Ramki Sreenivasan: The key is to make local people get some benefit from this incredible natural spectacle, rather than destroy it for short term gains as they are doing now.

We propose an alternative model of low impact “Amur Falcon Watch” eco-tourism that could attract birdwatchers and nature lovers from all over the world to watch this fantastic spectacle of tens of thousands of migrating Amur Falcons. It is possible to engage locals in eco-tourism to generate revenue. Observation towers could be erected in strategic vantage points equipped with binoculars and spotting scopes manned by trained local guides.

This would help Nagaland showcase the birds, build regional pride in being their guardian rather than destroyers. We (The Nagaland Biodiversity and Wildlife Conservation Project – NBWCP) have been training bird guides and promoting birding tours in Nagaland over the last few years with several local and international bird tours arriving.

Mark Szotek for Mongabay: Your efforts to mitigate the unsustainable falcon harvest has generated strong media interest. Is this media outreach having any effect at this point? Is there hope for this migratory population of this bird?

Ramki Sreenivasan: Yes, this strong international outcry has helped – after all the birds also belong to China and Russia and African countries. While we believe it is important for national and international organizations to mount pressure on the central government, it is critical to work with local officials and communities in Nagaland as we draw up a comprehensive plan to put an end to the killings by next season.

Yes, we do believe that the killings can be stopped (refer pt. 4) by next season that would hopefully allow the migrating bird populations to rebound in subsequent seasons. But more importantly we hope misguided dilution of conservation laws in the name of alleged traditional tolerance of wildlife among locals, would stop. It is not just falcons the same thing is happening to many other species but on a less noticeable scale because of such simple-minded belief in traditional tolerance. 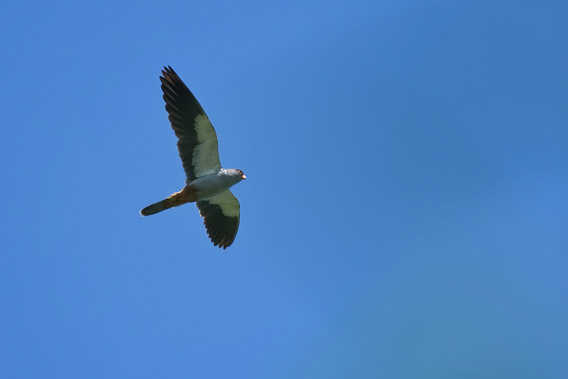 Mark Szotek for Mongabay: But what about local support of Naga people for long term survival of this species? That seems to be missing?

Ramki Sreenivasan: There is a wonderful development from this horrid scene, the local people fighting the massacre are conservationists from the same Naga community. They are a group called Nagaland Wildlife & Biodiversity and Conservation Project (NBWCP) founded by Ms. Bano Haralu, a journalist and a dedicated conservation activist. This group has been involved with biodiversity conservation in the state for three years. Local Naga youth like Rokohebi
Kuotsu work as field assistants with Bano and bring in local field knowledge. It is only their tough and timely advocacy that has helped us highlight this problem.

As much as traditions are destroying wildlife in Asia, new rays of hope also emerge.

Mark Szotek for Mongabay: In closing, why do species like the Amur Falcon matter?

Shashank Dalvi: Amur falcons are a part of the natural world that we came from, which we are losing rapidly…They belong not only to our generation, but to generations yet to be born. we have no right to wipe them out like we did with other once abundant wildlife species. We would like to draw attention to the classic case of Passenger Pigeons (Ectopistes migratorius) extinction. Passenger Pigeons were believed to have played a large ecological role in the forests of North America influencing native tree distributions and forest tree compositions in the region. The species went from being one of the most abundant birds in the world during the 19th century to extinction early in the 20th century. Roughly 3-5 billion birds were indiscriminately hunted during the later part of the 19th century. Traditional small-scale hunting gave way to large scale trapping using nets (much like the case of Amur Falcons). This sudden increase in the scale of hunting drove one of the world’s most abundant species to extinction.

Amur Falcons are an extraordinary species but could meet a very similar fate if the hunting continues unabated. These birds are distributed across two continents (in either hemisphere) and play a very important role in the respective ecosystems. Additionally, as the Amur Falcons are wholly insectivorous, their role in ecosystem is likely to be very crucial and different from other raptors.