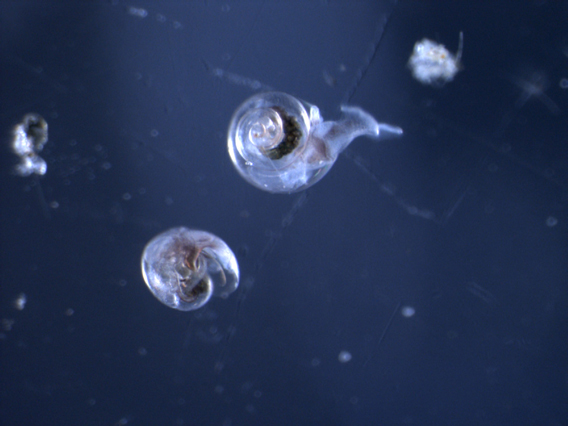 Marine snails, known as Limacina helicina antarctica, are seeing their shells dissolve due to carbon emissions. Photo by: Nina Bednarsek.

Marine snails, also known as sea butterflies, are dissolving in the Southern Seas due to anthropogenic carbon emissions, according to a new study in Nature GeoScience. Scientists have discovered that the snail’s shells are being corroded away as pH levels in the ocean drop due to carbon emissions, a phenomenon known as ocean acidification. The snails in question, Limacina helicina antarctica, play a vital role in the food chain, as prey for plankton, fish, birds, and even whales.

Carbon emitted into the atmosphere by burning fossil fuels, cutting forests, or industrial agriculture doesn’t always stay there, a significant amount of the carbon is sequestered by the ocean—otherwise the world would be heating up far faster than it is. However, this extra carbon in the ocean comes with a price: ocean acidification, which U.S. National Oceanic and Atmospheric Administration (NOAA), Jane Lubchenco, recently dubbed “climate change’s equally evil twin.” .

As it changes the chemical-makeup of the seas, ocean acidification could have massive impacts on the health and survival of corals, crustaceans, molluscs, and even some plankton by dissolving shells and plates made from calcium carbonate. For its part, Limacina helicina antarctica depends on aragonite, a type of calcium carbonate, which is the extremely vulnerable to dropping pH levels.

Researchers used electron microscopes to study Limacina helicina antarctica caught at the surface of the Southern Ocean and found “severe levels of shell dissolution,” according to the paper. The snails were caught in an upwelling—an area where deep, cold water is pushed to the surface—which naturally depletes the availability of aragonite. When combined with ocean acidification, the natural upwelling had taken a large toll on the sea butterflies’ shells. To date, this is one of the first time such impacts have been discovered in the wild, and not just the laboratory.

“The snails do not necessarily die as a result of their shells dissolving, however it may increase their vulnerability to predation and infection, consequently having an impact to other parts of the food web,” Tarling said in a press release.

The cold water of the Southern Ocean means that wildlife here is the first to be impacted by ocean acidification. However, as the oceans sequester more carbon, impacts are expected to expand beyond the poles.

Scientists have long warned that the simplest way to combat ocean acidification is to cut carbon emissions into the atmosphere. However, global carbon emissions continue to rise with a new analysis in Nature Climate Change predicting that industrial emissions will jump another 2.6 percent in 2012, hitting a new record.

Limacina helicina antarctica are around a centimeter in size and are an abundant species in the Southern Ocean surrounding Antarctica. 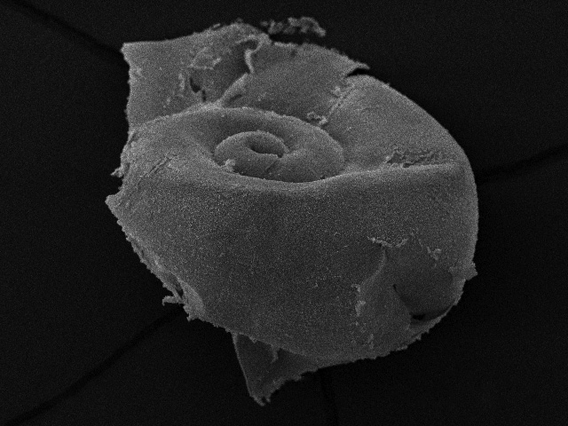 A scanning electron microscope of a sea butterfly with acute levels of shell dissolution. Photo by: Nina Bednarsek.