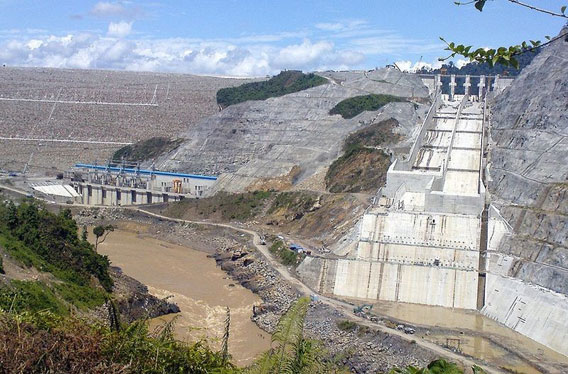 A top minister in the Malaysian state of Sarawak has told activists campaigning for cleaner energy to ‘stop breathing’, reports The Borneo Post.

“I would like to throw a challenge at them (critics) on two fronts,” Land Development Minister Tan Sri Dr James Jemut Masing told the newspaper. “Firstly, please provide us with the best source of alternative power besides fossil fuel, and secondly, they have to stop breathing if they criticize just for the sake of criticizing.”

Masing was responding to the South-East Asia Renewable Energy People’s Assembly (Searepa), a five-day conference that took place in neighboring Sabah. The conference concluded with a set of proposals to shift toward less damaging sources of energy. One of the recommendations was a halt to a series of large dams planned in Sarawak. Critics say the dams will displace thousands of people, flood vast areas of rainforest, and serve primarily as a vehicle for state corruption. The dams, which will cost tens of billions of dollars, will produce substantially more energy than Sarawak consumes.

“We understand that the 12 dams if developed fully will generate 20,000 megawatts in Sarawak. Based on media reports quoting leaders, Sarawak will have a surplus of electricity for many years now that there is power generated from the Bakun dam,” said SEAREPA Programme Coordinator Gabriel S. Wynn in a statement. “We also urge Tan Sri Masing to address the key concerns of the group as communicated through two declarations that had raised the impact of development projects on the people and ecosystems of Sarawak.”

Masing told The Borneo Post the dams would be built as needed to “produce electricity on a commercial scale”. He added that “Hydro-electricity is renewable and clean”.

However research in the Amazon indicates that tropical dams in forest areas can be a signifiant source of methane, a potent greenhouse gas.

“Dams release methane, a gas with a much higher impact on global warming per ton than carbon dioxide, especially during the first decades after construction. These emissions are often even higher than those of generating electricity from fossil fuels for decades, thus corresponding to the narrow time interval when global warming must be brought under control to avoid massive impacts.”

Searepa involved some 120 participants from 11 nations. The meeting was called after local activists effectively blocked a controversial coal plant in Sabah last year. That plant would have jeopardized local forests and a portion of the Coral Triangle, an area renowned for its marine biodiversity. Opposition to the plant was grew after a team led by Dan Kammen, a renewable energy expert from UC Berkeley, produced a comprehensive assessment showing clean energy options that could replace the coal plant.

Power, profit, and pollution: dams and the uncertain future of Sarawak

(09/03/2009) Sarawak, land of mystery, legend, and remote upriver tribes. Paradise of lush rainforest and colossal bat-filled caves. Home to unique and bizarre wildlife including flying lemurs, bearcats, orang-utans and rat-eating plants. Center of heavy industry and powerhouse of Southeast Asia. Come again? This jarring image could be the future of Sarawak, a Malaysian state on the island of Borneo, should government plans for a complex of massive hydroelectric dams comes to fruition. The plan, which calls for a network of 12 hydroelectric dams to be built across Sarawak’s rainforests by 2020, is proceeding despite strong opposition from Sarawak’s citizens, environmental groups, and indigenous human rights organizations. By 2037, as many as 51 dams could be constructed.