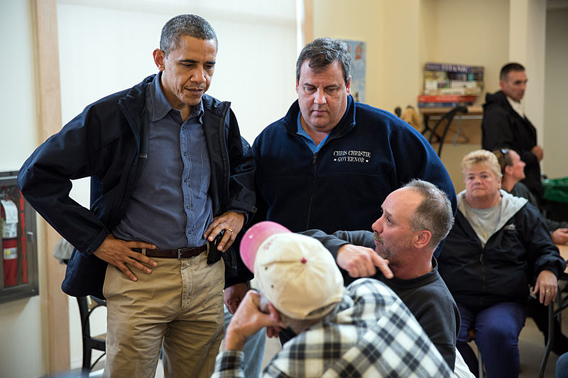 Following the devastation wrought by Hurricane Sandy—which many scientists say was likely worsened by climate change—and a long silence on the issue of global warming during the Presidential campaign, environmentalists yesterday were disappointed when re-elected President Barack Obama seemingly put action on climate change on the back burner.

“There’s no doubt that for us to take on climate change in a serious way would involve making some tough political choices, and you know, understandably, I think the American people right now have been so focused and will continue to be focused on our economy and jobs and growth that, you know, if the message is somehow we’re going to ignore jobs and growth simply to address climate change, I don’t think anybody’s going to go for that,” President Obama said at a press conference in response a question by New York Times reporter, Mark Landler.

The President added, “I won’t go for that.”

His statement, which could be viewed as a signal that climate change is still not a big priority in the White House, put climate activists on guard.

“While conventional D.C. wisdom is focused on the manufactured crisis of the ‘fiscal cliff,’ the truth is that the most urgent threat to our national safety and economic well-being is the climate cliff that we are already beginning to tumble over,” Brad Johnson, campaign manager of ClimateSilence.org, said in a response.

Following Obama’s re-election on November 6th, the environmental community is hoping for a new chance at tackling climate change at the federal level, especially with renewed media and political interest in the issue following Hurricane Sandy. Such hopes have been buoyed by Obama’s reference to climate change in his victory speech after beating Mitt Romney at the polls. In addition, over the past week there has even been significant chatter in Washington D.C. of installing a carbon tax, perhaps as apart of an agreement to avoid the “fiscal cliff.”

However, President Obama made no mention to specific policies at the press conference, instead stating that he was going to have “a wide-ranging conversation with scientists, engineers and elected officials to find out what more can we do to make short-term progress in reducing carbons and […] what realistically can we do long term to make sure that this is not something we’re passing on to future generations that’s going to be very expensive and very painful to deal with.”

Obama did re-iterate that he accepts the science of climate change and that impacts—such as melting Arctic sea ice—are occurring faster than predicted. In addition, he stated flatly “we haven’t done as much as we need to.” Such words gave some environmental commentators hope that Obama would move eventually on the issue, however many have been urging Obama for years to become a “climate hawk”—not just taking swift and large-scale action to reduce emission, but also fully communicating with the American people about the threats posed by a warming world, including impacts on national security and the economy.

It’s not just American environmentalists that see a new possibility for climate action after the U.S. election. The European Union’s climate commissioner, Connie Hedegaard, said this week that she hopes “the re-elected president will pull his whole weight now into this area.”

“I’m absolutely sure that that could make a difference not only internally in the United States, but also at the international scene,” she added.

But perhaps, Will Oremus with Slate.com put the criticism of Obama’s statements on climate change yesterday most succinctly in a series of five tweets: “Here is Obama on climate change, in four short sentences. 1) Climate change is real. 2) We have an obligation to future generations to do something about it. 3) Doing something about it will require tough political choices. 4) I’m not willing to make those tough political choices.”

Of course, Obama’s statements, whether perceived negatively or positively by those promoting action on climate change, came only eight days after his re-election and much will likely change in the next four years.

In fact, what may have been most remarkable about Obama’s discussion of climate change yesterday was not his response, but the fact that the president was asked the question in the first place. The U.S. media has spent the last few years largely avoiding the issue of climate change, even in light of record fires, droughts, floods, and heatwaves across the country, not to mention the great Arctic ice melt. In four presidential debates, not one question was asked about climate change and none of the candidates brought it up. In fact, yesterday’s question, put forward by Mark Landler, would probably never have been asked if Hurricane Sandy hadn’t decimated the U.S. East Coast killing over a hundred people and causing an estimated $20 billion in damages.

President Obama is in New York today seeing some of the damage first hand.

(11/14/2012) At a news conference today, a question by New York Times reporter Mark Landler pushed President Obama to speak at some length about climate change. In his answer, Obama re-iterated his acceptance of climate science and discussed how progress on tackling climate change might proceed in his second term, though he also noted that he wouldn’t put action on the climate ahead of the economy. President Obama made a small reference to climate change in his victory speech following his historic re-election last Tuesday, but his answer today was the most the president has talked about the issue at any length since at least Hurricane Sandy.

(10/23/2012) The final presidential debate between President Barack Obama and Governor Mitt Romney, focusing on foreign policy, ended like all the others: without a mention of climate change or its likely impacts on Americans, from rising sea levels to worsening extreme weather to the threat of instability abroad. While environmental groups have kicked-off a campaign to target this “climate silence,” the lack of discussion on climate change is a part of a larger trend in the U.S. where media coverage of the issue has declined even as scientists argue that impacts are increasing.

(10/16/2012) September 2012 tied with 2005 for the warmest on record around the globe, according to new data released by the National Oceanic and Atmospheric Administration (NOAA). The average land and ocean temperature was 16.27 degrees Celsius (61.31 degrees Fahrenheit) for this September, 0.67 degrees Celsius (1.21 degrees Fahrenheit) above the 20th Century average for the month. Shockingly, this is the 331st month in a row that has been above the 20th Century average.