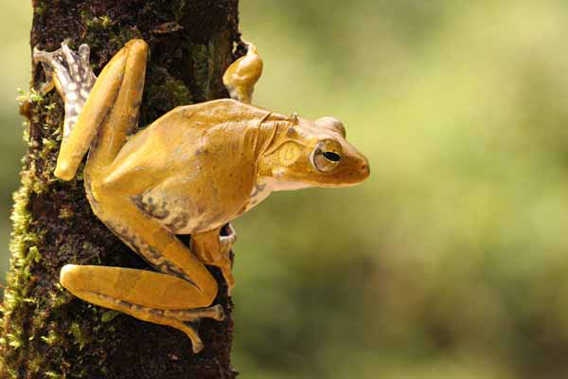 Sri Lanka, an island country lying off the southeast coast of India, has long been noted for its vast array of biodiversity. Islands in general are renowned for their weird and wonderful creatures, including high percentages of endemic species—and Sri Lanka, where scientists recently discovered a new frog species, is no exception.

Sri Lanka harbors one of the greatest concentrations of amphibians in relation to area on the planet. There are 105 species of amphibians in Sri Lanka and 89 of these (85 percent) are endemic to the island, i.e. found no-where-else in the world. It is no surprise then that Sri Lanka has unveiled yet another of its secrets: a new, rare, and endemic frog.

Scientists discovered the Ranwella’s spined tree frog (Polypedates ranwellai) in the country’s Gilimale Forest. The frog was first observed in 2000, but only recently have specimens been subjected to “rigorous scientific processes” in order to establish that it is a new species. Leading researcher Mendis Wickramasinghe said the frog was named after Dr. Sanjeewa Ranwella in honor of his exceptional dedication towards wildlife conservation in Sri Lanka.

Tentatively categorized under the genus Polypedates, the species is believed to be a totally new species due to its skeletal deviations.

“Its skull possesses some unique osteological features. There are bony protrusions right behind its jaw and four at the back of its skull,” says Wickramasinghe.

Apart from the physical attributes of the frog, very little is known about this, thought to be, endemic species.

“Not much on its ecology is known apart from the breeding behaviour (which is incomplete) we observed just once, since the species is found to be highly seasonal and very rare,” Wickramasinghe said.

Sri Lankan amphibians are currently undergoing a treacherous time; over half are listed as Critically Endangered, Endangered, Vulnerable or Near Threatened, while 20 percent have been listed as extinct by the IUCN.

The habitat of Polypedates ranwellai is already under threat. Sri Lanka has been ravaged by habitat loss as human populations have boomed.

Intense deforestation has meant that Sri Lanka has only 2-3 percent of its primary forest remaining. Even the remaining forest is patchily distributed.

On top of the increasing threat of deforestation, further habitat loss looms large with the proposal of the construction of a large dam, which would engulf the Gilimale Forest reserve. Logging and hazardous activities such as gem mining, sand mining, use of agro chemicals, cutting down and setting fires in the forest edge also pose considerable threats.

Asked if there were any conservation actions in place in this area of Sri Lanka, Wickramasinghe said “there are none, it is one of the least protected areas in the island.”

The reality is that on-going issues surrounding conservation in this region of Sri Lanka not only threaten the existence of the only known population of Polypedates ranwellai in the world, but many other species along with it. The region is also home to the Endangered and endemic Sri Lankan leopard (Panthera pardus kotiya), the Endangered Asian elephant (Elephas maximus), the Vulnerable sloth bears (Melursus ursinus), and Indian flying foxes (Pteropus giganteus).

Currently, around 13 percent of terrestrial land in Sri Lanka is protected, but pesticides, pollution and growing agriculture are accumulating in the countries’ most important ecosystems. 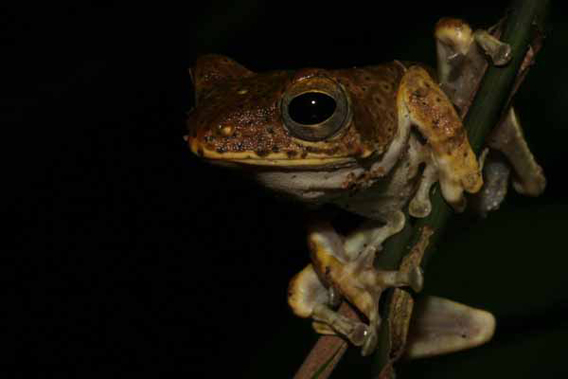 (09/07/2012) A tiny new frog species has been discovered in the rainforests of India’s Western Ghats.