Mystery animal in Borneo not such a mystery after all, or is it? 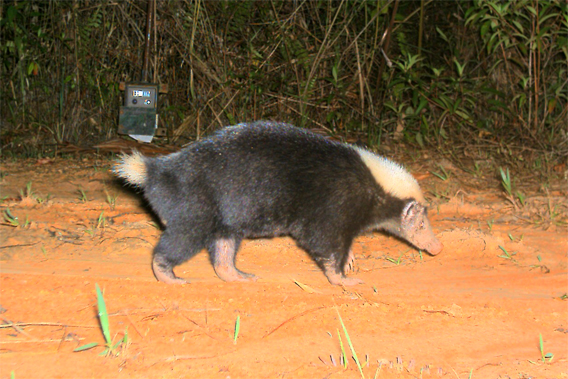 An unknown mammal was recently killed in the Malaysian State of Sarawak.

According to the Borneo Post, a Sarawak newspaper, this animal, described as mixture between a bear and a boar, had attacked two people on two different occasions before it was killed. Local people had never seen it before and had no idea what it could be. The news even made it onto the popular Discovery news website.

Comments following the article made various suggestions as to the animal’s identity. These ranged from binturong, the large frugivorous civet of Bornean forest to what was jokingly referred to as “Beaboar”.

A few commenters got it right. The animal was indeed a Sunda Stink-badger, or Mydaus javanensis, one of only two member of the skunk family Mephitidae, outside the Americas. For a long time this species was placed as a member of the mustelid family – to which all real badgers belong – but DNA and morphological studies strongly supports their relationship to the American skunks (1-3).

As its name suggests, the Sunda Stink-badger only occurs in Sundaland, the biogeographic region comprising the many islands west of the Wallace Line in island South-East Asia. Within that region it appears to be restricted to Borneo, Java, and Sumatra, where it can be locally common. Its closest relative the Palawan Stink-badger is restricted to the Philippine island of Palawan and small neighboring islands. 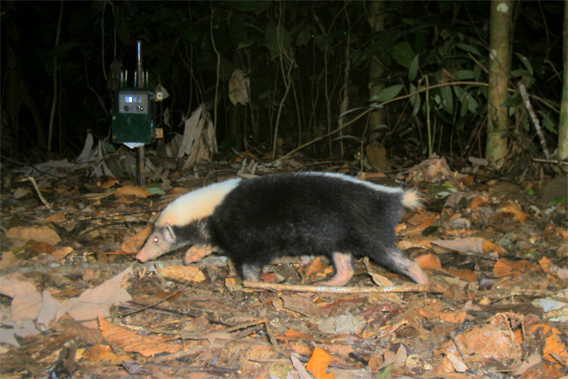 So why the mystery? Why did local people have no idea what this large, conspicuous mammal species could possibly be?

The remarkable thing about the Sunda Stink-badger is that its occurrence appears to very patchy. In parts of Sabah the species is so common that it is the most often encountered road kill. These include areas that have been mostly cleared for oil palm, where the badger seems to thrive.

In most parts of Borneo, however, the species appears to be either absent or very rare.

Historic references provide insight as to why this may be. A reference from 1884, stated that “the Stink Badger … is remarkably common in the “district Amoentai” [=Amuntai District in S Kalimantan Province]” (4). There are, however, no recent records of the species from that same area. Another reference from 1939 (5), also suggested that the range of the species in east Borneo was very patchy, while in the Malaysian State of Sarawak the species was thought only in one location (6).

What could drive this patchiness? The species could depend on particular ecological resources. Its diet of earth worms and other invertebrates suggests that it would need deep soils and litter layers in which such food items occur. Also the stink badger sleeps in burrows which it digs into the ground and sometimes shares with porcupines. Again, this would indicate that deep soils are needed, and, for example, that the species would not occur on peat lands, where such burrows would not be possible.

A third factor that may determine patchiness is hunting. All reports indicate that, even though the species can produce an almighty, long-lasting stink, its meat is apparently well liked, and its skin is traded for medicinal purposes (6).
The species is presently listed on the IUCN Red List as “Least Concern”, indicating that it is thought to remain relatively common. Without understanding however what is driving the species’ patchy distribution this may be a dangerous assumption though.
In the course of the Borneo Carnivore Symposium 2011, researchers tried to shed some light on this mystery species. Researchers from the Leibniz Institute for Zoo and Wildlife Research together with the IUCN/SSC Small Carnivore-, Cat- and Otter- Specialist Groups, and the Sabah Wildlife Department synthesized the scattered information on Bornean carnivores. Altogether 170 historical and recent records of the Sunda Stink-badger were collated and the results confirmed that almost all records came from Sabah and neighboring areas in north-west Kalimantan or west Sarawak. Records from other parts of Borneo were only found in historical accounts.

The recent newspaper report is the first recent record in decades for south-eastern Sarawak, far away from all previous accounts. The big question, why it has not been recorded in this area for such a long time remains. Maybe a suggestion made in the Borneo Post article was correct: “this species might reappear due to the opening of the nearby jungle for agriculture and other developments”. At least from Sabah we know that Sunda Stink-badger can also be found in disturbed forests.

It is not the first time that mystery animals have been reported from Borneo. In 2005, WWF reported the finding of strange looking medium sized mammal, which the media likened to an arboreal fox. Detailed study of the camera trap pictures suggested that it was in fact a well-known a flying squirrel photographed from an unusual angle and in an unusual terrestrial setting. Still, there might still be other unknown species out there lurking in Borneo’s vast jungles.

What we need is a dedicated researcher with nocturnal tendencies to spend some time with the Sunda Stink-badger, helping us understanding this species better. Volunteers?