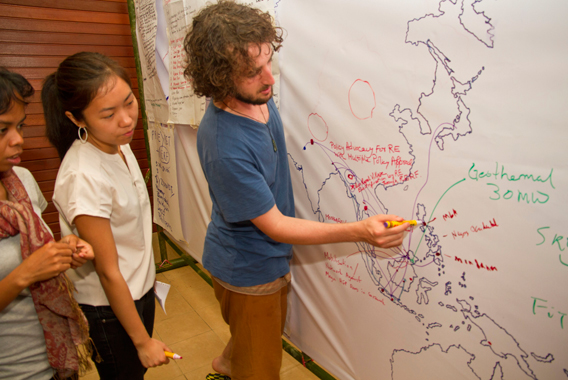 Participants from diverse backgrounds and groups marking on a map the creation of partnerships through identified projects at the end of the Southeast Asia Renewable Energy People’s Assembly (SEAREPA) at the Rainforest Discovery Centre in Sandakan, Sabah. Photo by: Suzanne Chong/LEAP.

The first ever meeting of the Southeast Asia Renewable Energy People’s Assembly (SEAREPA) ended with agreement on 12 future projects, including developing community micro-hydro power and pushing for new policies on decentralized renewable energy in the region. Held in Malaysian state of Sabah on the island, the meeting brought together 130 people from some 80 different groups.

“At this first SEAREPA, we drew diverse groups. We now have to ask ourselves where we wish to invest that positive energy,” Gabriel S. Wynn, the coordinator of SEAREPA said in a press release.

Born from years of grassroots work to stop a coal-fired plant on Sabah’s coastline, SEAREPA is a community-oriented renewable energy organization. When local and activists won the fight against the coal plant in early 2011, they wanted to bring what they learned with the wider Southeast Asian region.

The conference ended with goals to create an online network for journalism in the region on green energy, promote regional exchanges of renewable energy systems, build a youth alliance in the Mekong Delate, and build a network against the massive dam spree in Sarawak among other initiatives.

Wynn says the meeting has created “a renewable energy ecosystem” for the region to build on.

Hosted by a broad coalition of groups—including Land Empowerment Animals People (LEAP), TONIBUNG (Sabah-based Friends of Village Development), Green Empowerment and the Rainforest Discovery Centre (RDC)—a second SEAREPA is planned for next year either in Laos or the Philippines.