From ‘fertilizer to fork’: food accounts for a quarter of the world’s greenhouse gas emissions 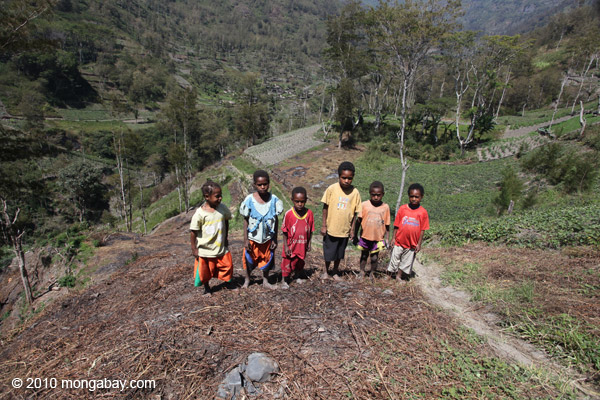 Children stand in sweet potato fields in Indonesian New Guinea. A new report finds that poor and small-holding farmers are most vulnerable to the impacts of climate change. Photo by: Rhett A. Butler.

Growing, transporting, refrigerating, and wasting food accounts for somewhere between 19-29 percent of the world’s greenhouse gas emissions in 2008, according to a new analysis by the CGIAR Research Program on Climate Change, Agriculture and Food Security (CCAFS). In hard numbers that’s between 9.8 and 16.9 billion tonnes of carbon dioxide, more than double the fossil fuel emissions of China in the same year. Over 80 percent of food emissions came from production (i.e. agriculture) which includes deforestation and land use change.

“We are coming to terms with the fact that agriculture is a critical player in climate change,” Frank Rijsberman, the CEO of the CGIAR Consortium, said in a press release. “Not only are emissions from agriculture much larger than previously estimated, but with weather records being set every month as regional climates adjust and reset, there is an urgent need for research that helps smallholder farmers adapt to the new normal.”

While researchers have long estimated the climate costs of food production, this is the first analysis that attempts to take the entire food industry into account.

“It includes manufacture of inputs like fertilizers, then agriculture itself, but also food distribution and sales, use of food in the home, and how food waste is managed,” the report’s lead author, Sonja Vermeulen, told the Inter Press Service in an interview, dubbing this approach from “‘fertilizer to fork.'”

The analysts note that climate change may produce winners and loser throughout the agricultural system. Some crops may have to abandoned regionally as warming continues, while other crops may see expansion. However, the report warns that food security, especially for the world’s poor, will likely be undercut in a warming world.

“The principal concern for food systems under climate change is their reduced capacity to assure food security to poor populations vulnerable to hunger and malnutrition,” the scientists write.

According to the UN around one-in-eight people currently suffer from malnutrition or around 870 million. Climatologists have increasingly linked the rise in some extreme weather events—especially heatwaves, droughts, and floods—to global warming. Such events can have devastating impacts on regional and even global agriculture, as the record drought in the U.S. this year attests.

(10/04/2012) Food prices increased in September on the FAO Food Price Index after two months of stability, while food aid has been urgently called for in Yemen and Syria, and concerns lingered in parts of Africa. Food prices globally rose 3 points (or 1.4 percent) to 216 points.

Pastures, not forest, are best place for oil palm expansion in Colombia

(07/11/2012) Colombia is targeting a six-fold increase in crude palm-oil production by 2020. Conservationists fear this may compromise the nation’s natural ecosystems, but a new study suggests the impact may be minimized by limiting new oil palm plantations to certain areas of pasture land.