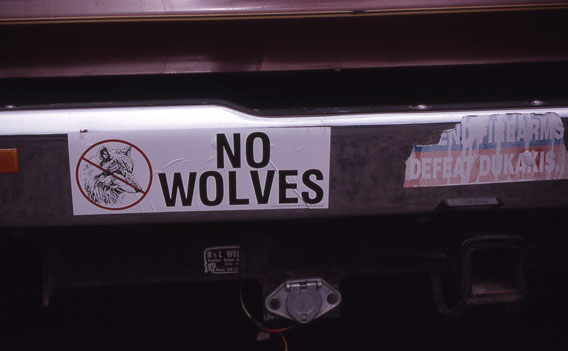 The hugely controversial wolf hunt in the U.S. has spread from the western U.S. (Montana, Idaho, and Wyoming) to the Midwest (Minnesota and Wisconsin) this year. Although the wolf hunt is less than a month old in the region—and only eleven days old in Minnesota—196 animals so far have been shot. As in the west, the wolf hunt has raised hackles among environmentalists along with fierce defenders among hunters. Wolves, which were protected under the the Endangered Species Act (ESA) since 1973, were stripped of that status by legislation in 2009, opening the door—should a state choose—to trophy hunting.

Although the return of gray wolves (Canis lupus) to the western Rockies—beginning with a pack entering Glacier National Park from Canada and then re-introductions in Yellowstone National Park—made headlines worldwide, it was rarely noted that wolves had never actually left the lower 48: small populations had held on in northern Minnesota. The landmark protection of the ESA then allowed these Minnesotan wolves to quietly but adroitly expand across Great Lakes region, including Wisconsin and Michigan, until around 4,000 wolves re-occupied old habitat. But now, these wolves are facing the first test to their natural re-wilding.

With around 3,000 wolves, Minnesota has the largest wolf populations in the U.S. excluding Alaska. Two wolf hunting seasons have been established by the state government, the first ends this Sunday while the second, which will include trapping, runs from November 24 through January 31st. Six thousand permits have been issued for wolf-hunting with a total quota of 400 wolves. Already, in just eleven days, 123 wolves have been killed.

A Minnesota Department of Natural Resources wolf specialist, Dan Stark, told the Duluth News Tribune that the success of wolf hunting was surprising.

“I think it has something to do with the wolf density here and more people in the woods. It might move wolves around more,” he said.

Stark, himself, had predicted around 70 wolves would be killed in the first season. Stark also said that the majority of wolf hunters in Minnesota are actually targeting deer, but take advantage of the new wolf hunt if they come across the top predator. The State Government currently charges $30 for a wolf permit to local Minnesotans.

In Wisconsin the quota for wolf hunting was set at 201 animals with the season hunting lasting for over four months and into next year (October 15th thought February 28th 2013). Less than one month into the season, 73 wolves have been killed. Wisconsin charges $100 for an in-state license.

The hunt comes as cattle ranchers have complained that wolves are targeting their livestock.

“Without controls, what we’ve seen in the state is a feeling of needing to take it into their own hands for folks that are frustrated,” Kurt Thiede, with the DNR told the New York Times. The DNR reimburses ranchers who lose livestock to wolves.

The Wisconsin DNR specifically notes that “the department’s objective for this first year is to begin to reduce the wolf population.”

Love, loathing, and a little science

But the wolf hunt in both states have left many environmentalists and animal rights activists angered.

“I think this wolf hunt is tragic,” Maureen Hackett, founder and president of Howling for Wolves, told the Minneapolis Star Tribune. She says the early success of Minnesota’s wolf hunt “proves the DNR didn’t know what was going to happen.”

Jo Dowler, the president of the Timber Wolf Preservation Society, told the New York Times that, “There’s a lot of value having the wolf alive, and to allow people just to shoot it is hurtful to many people, including the tribes who value the wolf and our wildlife economy.”

She adds that even after decades of living with wolves, the wild canines still brings out strong emotions in the Great Lakes.

“People absolutely love them or they absolutely hate them,” she says. “There are few people in the middle.”

In the political debate over wolves both in the west or the Midwest, little attention has been paid to the role of wolves in ecosystems. Recent research in Yellowstone National Park and Canada has noted that wolves, as top predators, may actually raise biodiversity and ecological richness. For example, the arrival of wolves in Yellowstone National Park, after an absence of around 70 years, changed long-entrenched elk behavior. Instead of browsing wherever they liked, elk began to retreat to forests, seeking shelter from the wolf packs–a change in behavior described as “the ecology of fear.” The sudden shift in elk browsing allowed forests along streams to return after decades of suppression. Beavers soon returned; songbirds flourished; fish took advantage of beaver pools; and the whole riverine ecosystem is in rebound.

Research on this phenomena has added to a growing understanding of the importance of top predators–whether wolves, sharks, or great cats–in maintaining rich, biodiverse, and productive ecosystems.

“We now have overwhelming evidence that large predators are hugely important in the function of nature, from the deepest oceans to the highest mountains, the tropics to the Arctic,” William Ripple, director of Oregon State University’s Trophic Cascades Program said last year following the release of a large review paper on the subject. “These predators and processes ultimately protect humans. This isn’t just about them, it’s about us.”

Still, the current trend in the U.S. is moving towards a new experiment in wolf management: how will these highly-social animals react behaviorally to sudden hunting? Are these wolf populations large and robust enough to survive annual quotas? And will ecosystems change with smaller, warier, and more harried wolf populations?

US wolves lose to politics

(04/17/2011) A ‘rider’ attached to the most recent budget passed this week in the US congress has stripped gray wolves from the protection of the Endangered Species Act, a first in the law’s nearly 40-year-history. The rider, which was signed into law under the budget on Friday by US President Barack Obama, hands gray wolves (Canis lupus) in Montana, Idaho, Utah, Washington, and Oregon from Federal protection to state control. Hunting is expected to begin soon.

(11/09/2009) Living on the roof of Africa, the Ethiopian wolf is one of the world’s rarest carnivores, if not the rarest! Trapped on a few mountain islands rising over 4,000 meters above sea level on either/both sides of the Great Rift Valley, this unique canid has so far survived millennia of human-animal interactions in one of Africa’s most densely populated rural lands. But the threat of climate change and a shifting agriculture frontier may require new conservation measures, according to Argentine-born Claudio Sillero, the world’s foremost expert on the Ethiopian wolf, who has spent two decades championing this rare species.

(11/02/2009) As hunting wolves is legal again in two American states, Montana and Idaho, researchers have discovered an important role these large predators play in creating nutrient hotspots in northern forest environments. Researchers from Michigan Technological University found that when wolves take down their prey—in this case moose—they do more than simply keep a check on herbivore populations. The corpses of wolf-hunted moose create hotspots of forest fertility by enriching the soil with biochemicals. Due to this sudden up-tick in nutrients, microbial and fungal growth explodes, in turn providing extra nutrients for plants near the kill.