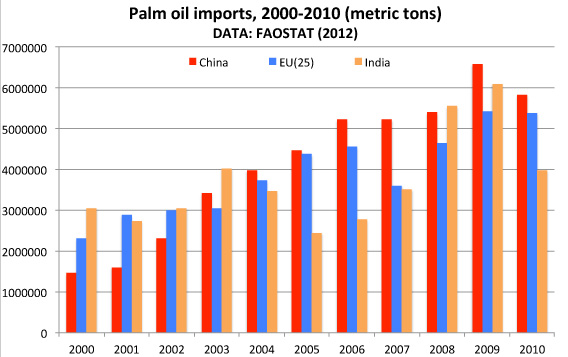 China and India, the world’s largest palm oil buyers, should reduce or eliminate an import tariff on eco-certified palm oil to boost demand for less-damaging production of the widely-used oilseed, said the President of the Roundtable on Sustainable Palm Oil (RSPO) during the body’s tenth annual meeting in Singapore.

“You would only need to shave a tiny proportion from the import tariff in order to make CSPO (certified sustainable palm oil) competitive with non-certified palm oil,” Vis was quoted as saying. “Both markets are very price sensitive, and even though the sustainability premium is not high, any premium is a problem.”

RSPO sales are currently mostly limited to Europe, where consumer concern about the environment translates to a competitive issue for many brands. However sales of RSPO-certified product is increasingly coming from outside the region, driven by firms that are conscious about their image and don’t want to be associated with deforestation or social conflict linked with palm oil production in some places. Green activists have helped push concerns about palm oil in front of the general public through colorful campaigns involving orangutans, which inhabit the rainforests and peatlands that are being converted for oil palm plantations.

Vis, who’s also Global Director Sustainable Sourcing Development at Unilever, said that the RSPO would have to work with local industry to convince governments to reduce tariffs for palm oil.

“If we as the RSPO board walk into the government office in New Delhi, I don’t even think they will grant us an interview. So we have to work with the local players,” Vis was quoted as saying. He added that the RSPO is in talks with the Chinese chamber of commerce in an effort to get certified plam oil “into the next five-year plan”.

China current has a 9 percent duty on edible vegetable oils and 2 percent for palm oil used for industrial purposes, according to Reuters. India has a 7.5 percent levy on refined palm oil, but no duty on crude palm oil.

Tariff reduction for certified palm oil has been previously proposed. In September 2011, the Dutch Product Board for Margarine, Fats and Oils (MVO), a group that has already committed to sourcing 100 percent of its palm oil demand to RSPO-certified suppliers by 2015, called upon the E.U. to abolish the 3.8 percent duty on crude palm oil imported into Europe. The group said lifting the duty would help offset the additional costs of producing certified palm oil.

The RSPO was formed in 2004 as a response to concern that oil palm expansion was driving deforestation in Malaysia and Indonesia, the countries that account for more than 80 percent of production. RSPO criteria include guidelines for avoiding conversion of high conservation value forest areas, treating waste products, reducing the use of fertilizers and pesticides, and interacting with local communities and workers.

While the RSPO has faced some criticism from environmentalists over its oversight and enforcement mechanisms, the group has recently censured some high profile members for failing to comply with its standards. In the meantime, RSPO sales have soared and now account for 14 percent of global palm oil production.

Due to its high yield and low cost relative to other oilseeds, palm oil is widely used in processed food products, soaps, and cosmetics. In some markets, up to half of packaged proceeded foods may contain palm oil or palm oil derivatives.