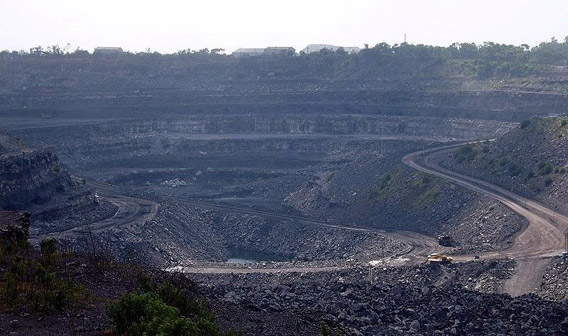 Surface coal mining in Bihar, India. Around 70-80 percent of India’s power is currently provided by coal.

Even as the clamor to reduce greenhouse gas emissions reaches a new high—echoed recently by such staid institutions as the World Bank and the International Energy Agency (IEA)—a new analysis by the World Resources Institute (WRI) finds that 818 new coal-fired plants are under proposal in China and India. In all 1,199 new coal-fired plants are currently planned worldwide, according to the report, totaling 1.4 million megawatts of energy.

According to the report 59 nations are currently proposing to build new coal plants. This includes 49 new coal plants proposed in Turkey, 48 in Russia, 36 in the U.S., 30 in Vietnam, and 17 in Indonesia. But India has by far proposed the most new coal-fired power plants: 455. While China, already the world’s biggest burner of coal, has proposed 363 new plants.

“Not all of these projects will necessarily be approved and developed—the report only looks at proposed new plants. However, this research shows a significant—and troubling—interest in coal development globally,” writes Ailun Yang with the WRI in a blog.

Coal is the world’s most carbon-intensive energy source. It has been estimated that currently around a third of all greenhouse gas emissions stem from the combustion of coal alone. In addition to its carbon emissions, coal also spreads around 20 toxic chemicals into the environment. The World Health Organization (WHO) estimates that the use of coal shortens a million lives around the world every year. Despite such figures, coal is on the rise, especially in Asia.

“After a slight decline in 2008, the global coal trade has rebounded and continues to grow,” the analysis reads. “In 2010 the global coal trade rose by 13.4 percent, reaching 1,083.1 million tonnes. This growth was fueled by the worldwide economic recovery and China’s expanding coal intake.”

(11/26/2012) As the 18th meeting of the UN Framework Convention on Climate Change (UNFCCC) kicks off this morning in oil rich Qatar, the world body warns that much more ambitious greenhouse gas cuts are needed to keep catastrophic climate change at bay. A new report by the UN Environment Program (UNEP) and the European Climate Foundation finds that even if all current emissions pledges are kept, the world will still spew 8 billion tonnes of CO2 equivalent above what is needed by 2020, putting the globe on a fast-track to dangerous climate change.

(08/01/2012) A shift away from coal and reduced gasoline demand coupled with a mild winter led to an 8 percent drop in U.S. carbon dioxide emissions during the first quarter of 2012, reports the Energy Information Administration. Emissions between January and March 2012 were the lowest since 1992.

China’s per capita emissions nearly as high as Europe’s

(07/19/2012) The average person in China emitted 7.2 tons of carbon last year, according to new figures from BL Netherlands Environmental Assessment Agency and the European commission’s Joint Research Centre (JRC). This means that the average Chinese citizen is now very close to the average European, who emits 7.5 tons, in terms of annual emissions. Having been named the world’s largest emitter of greenhouse gases in 2009—usurping the U.S. from its long-held position—China continues to lead the pack with emissions that rose 9 percent in 2011.

(05/07/2012) Thirteen Canadians were peacefully arrested this weekend for blockading Burlington Northern Santa Fe (BNSF) Railway train tracks in order to prevent the passage of coal stemming from the United States and destined to be burned in Asia. Among those arrested was Mark Jaccard, an economics professor with Simon Fraser University, who won the Nobel Prize for his work with the Intergovernmental Panel on Climate Change (IPCC).