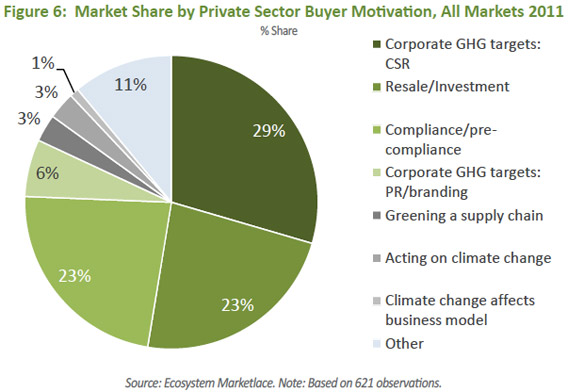 Forest carbon credits reached a record market value in 2011, but the market for credits generated under the Reducing Emissions from Deforestation and Degradation (REDD) mechanism fell sharply, as new projects were slower-than-expected to develop and faced political and economic headwinds, reports a new assessment of the global forest carbon market published by Ecosystem Marketplace.

The report, titled Leveraging the Landscape: State of the Forest Carbon Markets 2012, tracked transactions in the forest carbon market, which includes credits generated through four types of projects: REDD, afforestation/reforestation (A/R), Improved Forest Management (IFM), and Sustainable Agricultural Land Use (SALM). Carbon credits are generally used to “offset” greenhouse gas emissions, either on a voluntary basis or under regulatory frameworks.

State of the Forest Carbon Markets 2012 found that the value of activity in the market rose to $237 million in 2011, up 34 percent from 2010. The average carbon sold for just over $9, an annual increase of about 70 precent. Credits in voluntary markets fetched a 28 percent premium to compliance market credits. 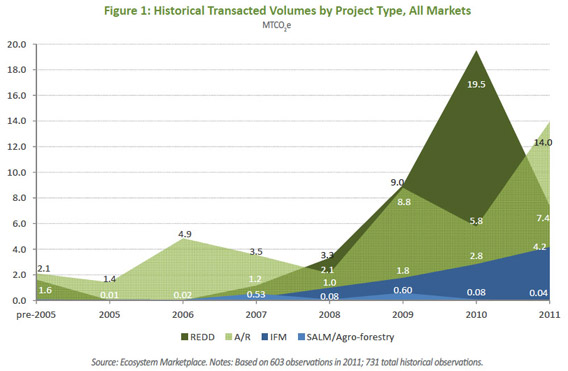 Most of the increase in market activity was driven by afforestation/reforestation projects (A/R), which usually generate credits through the establishment of plantations. In 2011, A/R-generated credits amounted to 55 percent of the market’s activity. REDD projects, which produce credits through forest conservation, accounted for 29 percent of activity, while “Improved Forest Management” (IFM) projects, which generate credits by reducing carbon emissions relative to conventional forestry operations, followed with 16 percent. Sustainable Agricultural Land Use credits represented a negligible share of the market in 2011. REDD’s share represented a sharp dip from 2010 when it represented 69 percent of activity.

The report says that REDD was slowed by “a new host of operational and political complications”. Only two REDD projects achieved verification under the Verified Carbon Standard (VCS), the dominant standard in the space. Several nascent projects were slow to develop, while Europe’s financial crisis affected the market and regulatory regimes expected to accept REDD credits did not emerge. State of the Forest Carbon Markets 2012 says that efforts to advance REDD have been complicated by the web of issues involved and the lack of an agreed-upon framework.

“All of these developments highlight the fact that REDD projects are being developed within the context of major extenuating challenges not encountered to the same degree by other project types, even within the broader carbon market,” stated the report. “Several project developers respond that if progress seems slow, it’s because REDD projects are intertwined with some of the world’s knottiest issues – from community development to land tenure systems to international country relations. As they come around to the reality of these challenges, it seems to those in the REDD market that current actors are much more serious and realistic now than just a few years ago.”

The report adds that progress was made in developing safeguards provisions for REDD, including UN-REDD and the World Bank’s Forest Carbon Partnership Facility “[gathering] feedback on their draft guidelines for obtaining stakeholders’ Free, Prior and Informed Consent (FPIC) and stakeholder engagement”. Adequate safeguards have been a key stumbling block for REDD, which critics fear could exacerbate land conflict, result perverse outcomes for biodiversity, and fail to reduce emissions if it isn’t properly designed.

State of the Forest Carbon Markets 2012 goes on to detail each the market for each approach to generating forest carbon credits. It concludes that the sector is continuing grow and innovate, with with demand primarily driven by the private sector and governments increasingly including forests in national or regional emissions-reduction programs.

“Many companies choose forest-carbon offsets because the projects are tangible and often support benefits beyond carbon sequestration, such as biodiversity,” said co-author Katherine Hamilton, Ecosystem Marketplace Managing Director, in a statement. “At the same time, we’re seeing some of the innovation developed in this voluntary marketplace feed into compliance programs.”