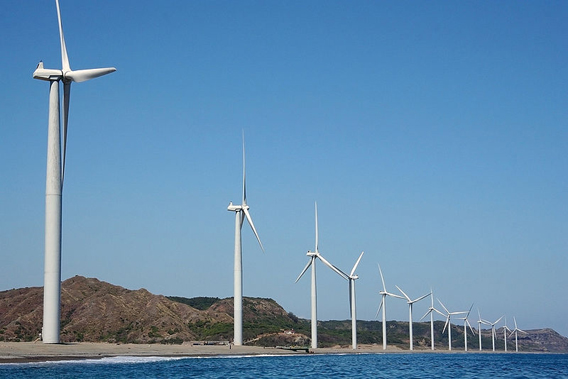 Bangui Windfarm in the Philippines. Photo by: John Ryan Cordova.

As the 18th meeting of the UN Framework Convention on Climate Change (UNFCCC) kicks off this morning in oil and gas rich Qatar, the world body warns that much more ambitious greenhouse gas cuts are needed to keep catastrophic climate change at bay. A new report by the UN Environment Program (UNEP) and the European Climate Foundation finds that even if all current emissions pledges are kept, the world will still spew 8 billion tonnes of CO2 equivalent above what is needed by 2020, putting the globe on a fast-track to dangerous climate change.

“The sobering fact remains that a transition to a low-carbon, inclusive green economy is happening far too slowly and the opportunity for meeting the 44 [gigatonnes] target is narrowing annually,” UNEP’s Executive Director, Achim Steiner, said in a statement.

“On current levels of ambition, we are heading for warming of 4 degrees Celsius this century—a prospect that the World Bank this week described as ‘devastating.’ In the face of such sobering assessments by some of the world’s largest institutions, we have to ask—what will it take for our leaders to listen and act?” Samantha Smith, head of WWF’s Global Climate and Energy Initiative, commented. The World Bank report painted a bleak picture of a world warmed by 4 degree Celsius including rising sea levels, expanding drought, economic stagnation, mass extinction, and a crisis in global agriculture.

Bridging the current gap in emissions pledges and what is required is not impossible, according to the report, which included input from 55 scientists.

The report points to several “policies that work” such as increased efficiency in buildings and appliances, improvements in public transit, and keeping forests standing.

“Replicating these successful policies and scaling them up would provide a way for countries to go beyond their current pledges and help to close the gap,” the report reads.

In addition, says Steiner, there has also been “a remarkable growth in investment in new renewable energies worldwide, which in 2011 totalled close to $260 billion.”

But this is still too slow, and fossil fuel-powered plants remain the choice of many nations. In fact, a new analysis by the World Resources Institute (WRI) finds that currently 1,199 new coal-fired plants are in the planning stages worldwide. Sixty eight percent of the new coal plants (818) are being planned by just two countries: India and China. Coal is the most carbon-intensive fuel source and scientists have long urged nations to phase out coal.