The world’s 25 most endangered primates: nearly a quarter in Madagascar 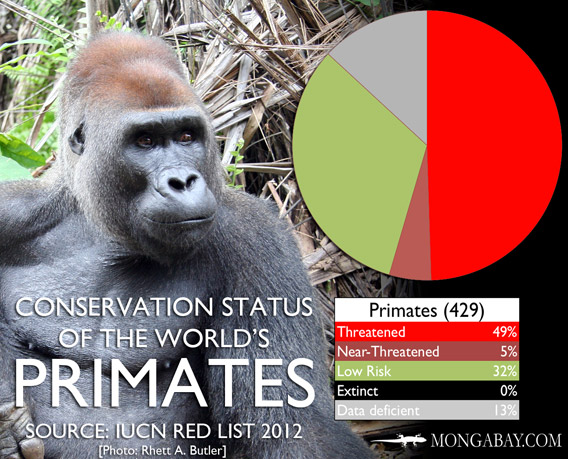 A coalition of conservation groups released the biannual Top 25 Primates list today, including nine species not appearing on the 2010 list, at the UN’s Convention on Biological Diversity (CBD) in Hyderabad, India. Madagascar tops the list as home to the most threatened primates, including six on the list. Following Madagascar, Vietnam contains five, Indonesia three, and Brazil two. In all, over half (54 percent) of the world’s primates, which have been evaluated, are considered threatened by the IUCN Red List.

“Once again, this report shows that the world’s primates are under increasing threat from human activities. Whilst we haven’t lost any primate species yet during this century, some of them are in very dire straits,” one of the report’s editor, Christoph Schwitzer, Head of Research at the Bristol Conservation and Science Foundation (BCSF), said in a press release. “In particular the lemurs are now one of the world’s most endangered groups of mammals, after more than three years of political crisis and a lack of effective enforcement in their home country, Madagascar.”

An incredible 91 percent of the world’s lemurs (out of 103 species and subspecies) are currently classified as threatened with extinction by the IUCN Red List. The northern sportive lemur (Lepilemur septentrionalis) is down to 19 individuals in the wild.

“A similar crisis is happening in Southeast Asia, where trade in wildlife is bringing many primates very close to extinction,” Schwitzer added. Nine of the species this year are found in Southeast Asia. Notably, the pygmy tarsier (Tarsius pumilus), found on the Indonesian island of Sulawesi, was thought extinct until 2000. Only four living individuals have been recorded by scientists to date.

Changes from the this year’s report as opposed to 2010 (nine species were replaced) were not necessarily due to changes in species’ status.

“The changes made in this list […] were not because the situation of the nine species that were dropped has improved. In some cases, such as, for example, [the black-and-white ruffed lemur (Varecia variegata)], the situation has in fact worsened. By making these changes we intend rather to highlight other, closely related species enduring equally bleak prospects for their future survival,” reads the report, adding that one species, the greater bamboo lemur (Prolemur simus), has seen prospects improve due to the discovery of larger population.

“Primates are a key element in their tropical forest homes,” Russell Mittermeier, Chair of the IUCN/SSC Primate Specialist Group and President of Conservation International, said. “They often serve as seed dispersers and help to maintain forest diversity. It is increasingly being recognized that forests make a major contribution in terms of ecosystem services for people, providing drinking water, food and medicines.”

The world’s primates are imperiled mostly by deforestation and poaching for food and the wildlife trade. 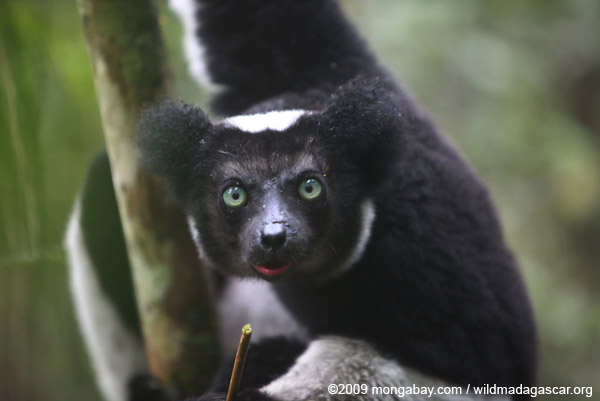 91% of Madagascar’s lemurs threatened with extinction

(07/13/2012) 94 of the world’s 103 lemur species are at risk of extinction according to a new assessment by the International Union for Conservation of Nature (IUCN) released by the group’s Species Survival Commission during a workshop this week. Lemurs, a group of primates that is endemic to the island of Madagascar, are threatened by habitat destruction and poaching for the bushmeat trade.

(07/09/2012) The Ecuadorian capuchin, a Critically Endangered subspecies of the white-fronted capuchin (Cebus albifrons), has been discovered in four new locations according to a new study in mongabay.com’s open access journal Tropical Conservation Science. Found only in Ecuador and northern Peru, the scientists say the monkey may be unique enough to warrant consideration as a distinct species.