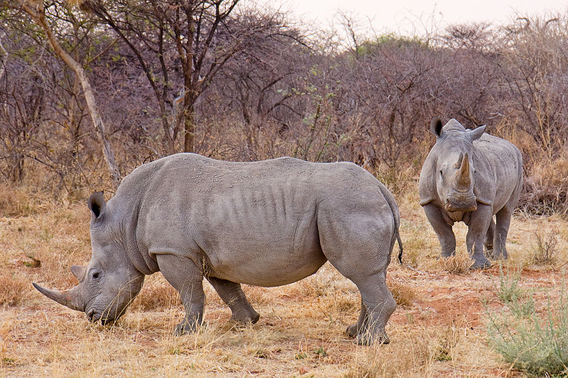 White rhinos in Namibia. White rhinos are the world’s most populous, but suffer massive poaching rates. Photo by: Ikiwaner.

Four hundred and fifty-five rhinos have been killed by poachers in South Africa since the beginning of the year. The number surpasses the record set last year (448) and proves that national efforts to stem poaching have not yet made a dent in actual killings. The mass killing has been spurred on by high demand for powdered rhino horn in Vietnam and China. A traditional curative in Asia, rhino horn has no medicinal properties according to scientists.

While poachers have killed 455 rhinos in the past nine-and-a-half months, increased law enforcement efforts have arrested 207 suspects linked to the black market trade.

Kruger National Park, the jewel in the crown of South Africa’s park system, has become the epicenter of the rhino poaching crisis. Fifty nine percent of the rhinos killed this year were in Kruger or 272 individuals.

South Africa is home to more rhinos than any other country, which is why it has become such a target for the illegal trade. The country has around 2,000 black rhinos (Diceros bicornis) and over 18,000 white rhinos (Ceratotherium simum).