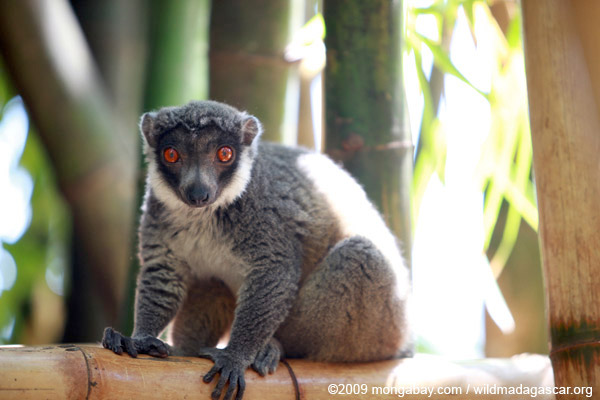 The mongoose lemur (Eulemur mongoz) is listed as Vulnerable by the IUCN Red List. Photo by: Rhett A. Butler.

If the world is to conserve its wealth of life—species great and small, beautiful and terrible, beloved and unknown—it will cost from $3.41-4.76 billion annually in targeted conservation funds, according to a new study in Science. But that’s not all, the cost of protecting and managing the world’s conservation areas was estimated at an additional $76.1 billion a year.

If these numbers seem daunting, the researchers write that in fact it’s a wise investment. The total costs are only about 1-4 percent of the total value of ecosystem services that are lost each year due to environmental destruction, a number estimated at $2.6 to 6 trillion. ‘Ecosystem services’ include a wide variety of benefits provided by the natural world that doesn’t often show up on balance sheets, such as pollination, soil health, seed dispersal, water filtration, air purification, and tourism among many others.

“More prosaically,” the scientists add, “the total required is less than 20 percent of annual global consumer spending on soft drinks.”

The study has been released in conjunction with a UN meeting in Hyderabad, India for the Convention on Biological Diversity (CBD). The CBD has pledged to stem the loss of the world’s biodiversity as well as increase protected areas worldwide by 2020. One of the main issues at the meeting is the dearth of funding for biodiversity.

A coalition of conservation groups–Conservation International (CI), BirdLife International and The Nature Conservancy (TNC)–have asked world leaders to commit to increasing global conservation funding from around $5 billion now annually to $48 billion by 2020.

“The total sums may sound large but much could be achieved through redirecting current investments,” says Carolina Hazin, Global Biodiversity Policy Coordinator at BirdLife International. “Reforming perverse and harmful subsidies such as those that stimulate overfishing, deforestation, destructive agricultural practices and the use of fossil fuels, could contribute significantly to the sustainable use of natural resources and halting biodiversity loss.”

However, according to the study’s findings $48 billion a year may be too little yet.

To determine the costs of total biodiversity coverage, researchers estimated how much it would cost to save 211 threatened birds (or 19 percent of known bird species) on the IUCN Red List, and then extrapolated their findings to cover all other imperiled species, including non-birds. Similarly they estimated per hectare costs for managing 396 conservation in 50 countries and then extrapolated the costs to the protected area goals set by the CBD, i.e. expanding protected areas to 17 percent of the world’s land area and 10 percent of oceans by 2020. The final tally: at most $80.86 billion a year.

According to the study, conservation of the world’s biodiversity is woefully underfunded. Direct conservation funding was found to be too low by 88 percent for the birds included in the study. Perhaps, even more alarming most of the money went to just a few species, leaving many imperiled birds with pittance or nothing at all. For example, only seven of the 211 birds surveyed had funding that reached levels of 90 percent.

The study also found that protected areas are currently underfunded by 69 percent in lower-income countries and 50 percent in higher-income countries. Lack of funding for protected areas can translate into areas rife with illegal logging, mining, poaching, and encroachment; some parks have become practically empty of medium to large-sized animals, others have lost much of their forest.

“Meeting [the CBD] targets will require conservation funding to increase by at least an order of magnitude,” the study concluded.

(07/25/2012) Governments have set up protected areas, in part, to act as reservoirs for our Earth’s stunning biodiversity; no where is this more true than in the world’s tropical forests, which contain around half of our planet’s species. However a new study in Nature finds that wildlife in many of the world’s rainforest parks remains imperiled by human pressures both inside and outside the reserves, threatening to undercut global conservation efforts. Looking at a representative 60 protected areas across 36 tropical nations, the scientists found that about half the parks suffered an “erosion of biodiversity” over the last 20-30 years.