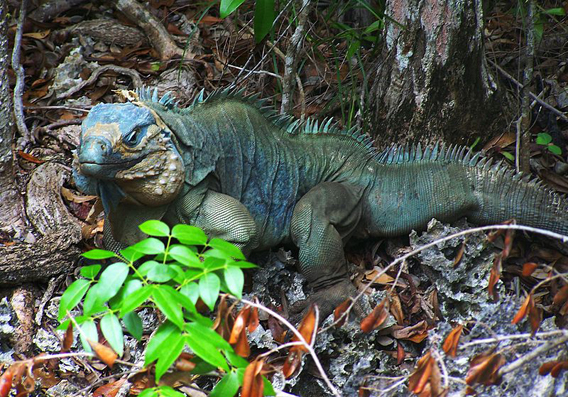 The wild blue iguana population has increased by at least 15 times in the last ten years, prompting the IUCN Red List to move the species from Critically Endangered to just Endangered. A targeted, ambitious conservation program, headed by the Blue Iguana Recovery Team, is behind this rare success for a species that in 2002 only numbered between 10 and 25 individuals.

Endemic to Grand Cayman island in the Caribbean, the blue iguana (Cyclura lewisi) suffered precipitous declines due to habitat loss, collisions with cars, and invasive species, i.e. cats, dogs, and rats, that killed off young iguanas en masse. The island is also overrun with common iguanas (Iguana iguana), which, fortunately, do not breed with their blue relatives. Responding to the near extinction of blue iguanas, conservationists quickly set up a captive breeding program, which allowed them to rear young iguanas and then release them into three different protected areas on the island once they were big enough, around two years old, to fend off alien predators.

Currently over 400 adult blue iguanas again roam Grand Cayman, marking a rare bit of upbeat news in the global extinction crisis. In all, scientists believe they have room in the three park—Queen Elizabeth II Botanic Park, Salina Reserve, and Colliers Wilderness Reserve—for a population of around 1,000 iguanas, unless more protected habitat can be secured.

Blue iguanas are known for remarkably long lives, allegedly over 60 years in captivity, and are the Grand Cayman’s largest native animal, growing to over 5 feet long.

(10/08/2012) I think about extinction a lot. It’s only natural for someone in my line of work. On my way to work I drive past the Colorado National Monument. Even from a distance it’s impressive: piles of dark schist 1,500 million years old; Wingate sandstone from the age of dinosaurs, all of it formed into cliffs, carved into spires. I can see Independence monument from the highway; a tall tower of tan sandstone that John Otto climbed near the beginning of the 20th century without rope. The monument is a display of the massive changes in the world. I often think about the rainforests and the oceans that once covered the land. Ecosystems have come and gone, the planet destroyed and rebuilt over and over.

(05/24/2012) The pygmy three-toed sloth (Bradypus pygmaeus) is one of the world’s most endangered mammals, according to a detailed survey of the population, which found less than 100 sloths hanging on in their island home. Only described by researchers in 2001, the pygmy sloth lives on a single uninhabited island off the coast of Panama. But human impacts, such as deforestation of the island’s mangroves, may be pushing the species to extinction.