Cross River gorillas and eastern gorillas lost more than half their habitat since the early 1990s due to deforestation, logging, and other human activities, finds a comprehensive new assessment across great apes’ range in West and Central Africa.

The study, published in the journal Diversity and Distributions by a large international team of researchers, used field data from some 15,000 sites, remote sensing data on climate and forest cover, and information on human impacts to evaluate change in habitat for eight species of gorillas, chimps, and bonobos. The scientists found an especially sharp decline in gorilla habitat, with significantly smaller losses for chimpanzees:

Overall the total habitat for the eight species declined nearly ten percent from 2.02 million square kilometers in 1990 to 1.81 million sq km in the 2000s.

According to the researchers, the expansion of logging and mining roads is one of the factors behind the decline in suitable habitat. Roads provide access to remote forest for bushmeat hunters and subsistence farmers as well as fragmenting key habitat. Rapid population growth in African countries is exacerbating the problem. 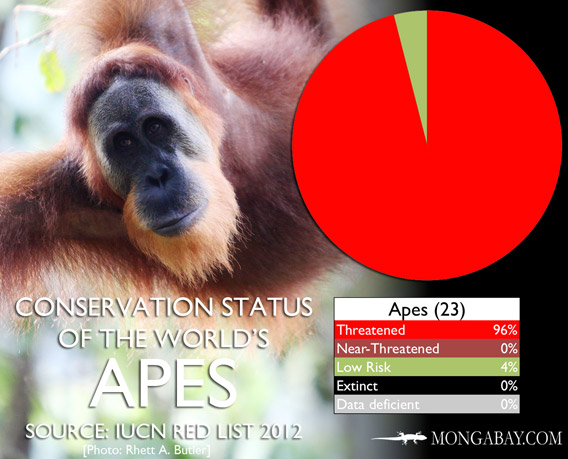 All of the world’s great apes are of conservation concern, according to the IUCN Red List. More broadly, 24 of the world’s 25 species of apes, are listed as vulnerable, endangered, or critically endangered. The only species that isn’t? Humans.