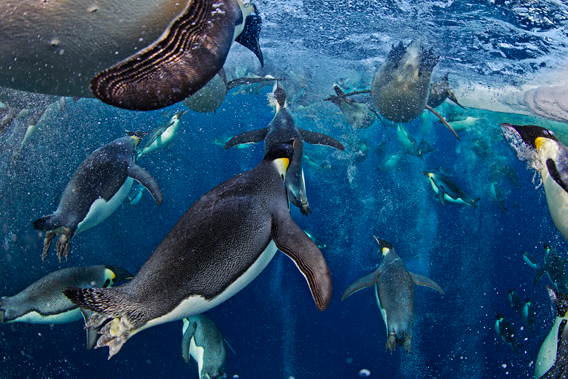 This was the image Paul had been so hoping to get: a sunlit mass of emperor penguins charging
upwards, leaving in their wake a crisscross of bubble trails. The location was near the emperor colony at
the edge of the frozen area of the Ross Sea, Antarctica. It was into the only likely exit hole that he lowered
himself. He then had to wait for the return of the penguins, crops full of icefish for their chicks. Paul locked
his legs under the lip of the ice so he could remain motionless, breathing through a snorkel so as not to
spook the penguins when they arrived. Then it came: a blast of birds from the depths. They were so fast
that, with frozen fingers, framing and focus had to be instinctive. ‘It was a fantastic sight’, says Paul, ‘as
hundreds launched themselves out of the water and onto the ice above me’ – a moment that I felt
incredibly fortunate to witness and one I’ll never forget. Photo by: Paul Nicklen (Canada) / Veolia Environnement Wildlife Photographer of the Year 2012.

Photographer, Paul Nicklen, says he’ll never forget the moment when a slew of emperor penguins burst by him in the frigid Ross Sea; he’d waited in the cold water, using a snorkel, to capture this image. Now, Nicklen has won the much-coveted Veolia Environnement Wildlife Photographer of the
Year Competition for the antic, bubbling photograph. Owned by the Natural History Museum and BBC Worldwide, this is the 48th year of the Veolia Environnement Wildlife Photographer of the Year (see a selection of photos below), which hands out awards to 100 notable wildlife and environment photos.

“This image draws us in for a glimpse of the emperor penguin’s private world at the end of the earth. I love this image because it shows perfectly organized, infinite chaos. My eyes linger over it trying to absorb everything that’s going on here,” judge and fellow-photographer, David Doubilet, said in a press release.

The shot of a red kite’s soaring mirrored by an airplane’s won Owen Hearn the Veolia Environnement Young Wildlife Photographer of the Year.

“The kite is looking straight at the camera and the aeroplane is perfectly positioned. All this against the white sky makes this image a winner,” judge Jari Peltomäki said of the photo. “The photographer must have worked hard to get this image—and when you work hard you might just get very lucky one day.”

Captions reproduced in full with permission from the Veolia Environnement Wildlife Photographer of the Year Competition. 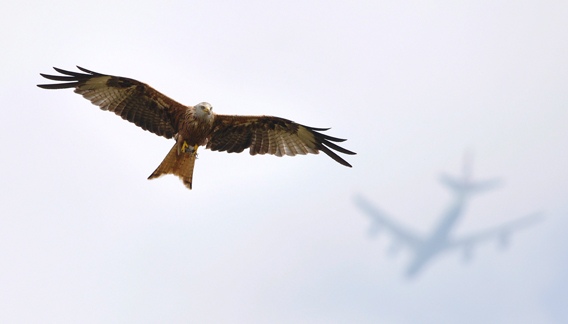 Harvest time at Owen’s grandparents’ farm draws in the birds of prey to feed on the fleeing small
mammals, and it also attracts Owen, with his camera at the ready. ‘Seeing this red kite with an
aeroplane in the distance was a moment I couldn’t miss,’ says Owen. The shot is symbolic for him for
two reasons. It was taken at the centre of the Bedfordshire site chosen for London’s third airport back in
the late 1960s. ‘Opposition to the planned airport stopped it going ahead, which is why I can photograph
the wildlife on the farm today.’ At the same time, British red kites also faced extinction following
centuries of persecution. But following reintroductions, numbers have increased dramatically, spreading
east from the Chilterns. Photo by: Owen Hearn (UK) / 2012: Veolia Environnement Young Wildlife Photographer of the Year. 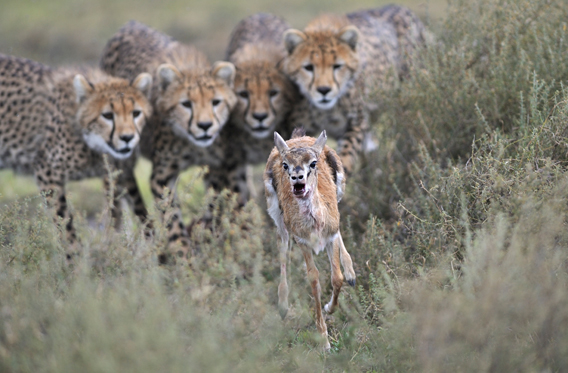 When a female cheetah caught but didn’t kill a Thomson’s gazelle calf and waited for her cubs to join
her, Grégoire guessed what was about to happen. He’d spent nearly a decade studying and
photographing cheetahs in the Serengeti National Park, Tanzania, and he knew that the female’s
behaviour meant one thing: a hunting lesson was due to begin. The female moved away, leaving the calf
lying on the ground near her cubs. At first, the cubs took no notice of it. But when it struggled jerkily to
its feet ‘the cubs’ natural predatory instincts were triggered,’ says Grégoire. ‘Each cub’s gaze locked on
to the calf as it made a break for freedom.’ The lesson repeated itself several times, with the cubs
ignoring the calf when it was on the ground and catching it whenever it tried to escape – ‘an exercise
that affords the cubs the chance to practice chases in preparation for the time they’ll have to do so for
real.’ Photo by: Grégoire Bouguereau (France) / 2012: Veolia Environnement Winner Behaviour: Mammals. 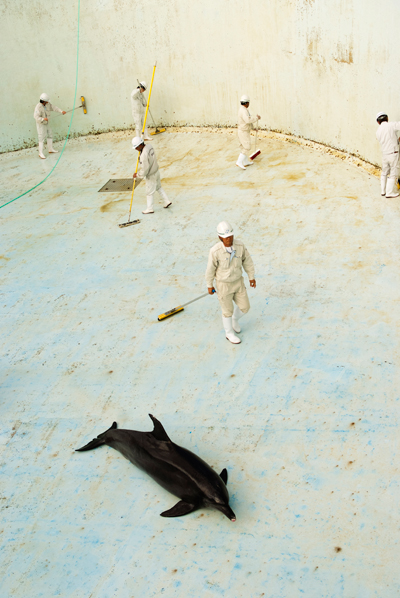 Wandering behind the scenes at a Japanese aquarium, where captive dolphins perform for the paying
public, Huang-Ju came across this scene. ‘I saw the workers scrubbing this tank,’ he says, ‘but then I
suddenly realised there were dolphins lying in the drained pool.’ It was a stark reminder of how different
life in a sterile aquarium is to a dolphin’s natural ocean habitat. ‘I was shocked,’ says Huang-Ju, ‘at how
the staff ignored the dolphin and didn’t seem to be in any hurry to refill the pool.’ Such captivity seemed
a high price for the animal to pay just for human entertainment. Photo by: Huang-Ju Chen (Taiwan) / 2012: Veolia Environnement The World in Our Hands Award, Commended. 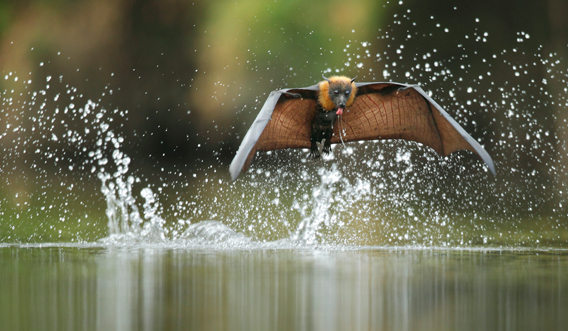 The grey-headed flying fox is the largest bat in Australia – and one of the most vulnerable. Once
abundant, there are now only around 300,000 left. The main threats include loss of habitat, extremetemperature
events and human persecution (roosting in numbers, eating cultivated fruit and an
undeserved reputation for bearing disease brings it into conflict with people). The bat is now protected
throughout its range, but its future remains uncertain. Ofer spent several days in Parramatta Park in
New South Wales photographing the bat’s extraordinary drinking behaviour. ‘At dusk, it swoops low
over the water, skimming the surface with its belly and chest,’ he says. ‘Then, as it flies off, it licks the
drops off its wet fur.’ To photograph this in daylight, Ofer had to be in the right position on a very hot
day, with the sun and the wind in the right direction, and hope a bat would be thirsty enough to risk
drinking. ‘This required standing in chest-deep water with the camera and lens on a tripod for three
hours a day for about a week in temperatures of more than 40 degrees.’ Photo by: Ofer Levy (Israel/Australia) / 2012: Veolia Environnement The Gerald Durrell Award for Endangered Species, Specially Commended. 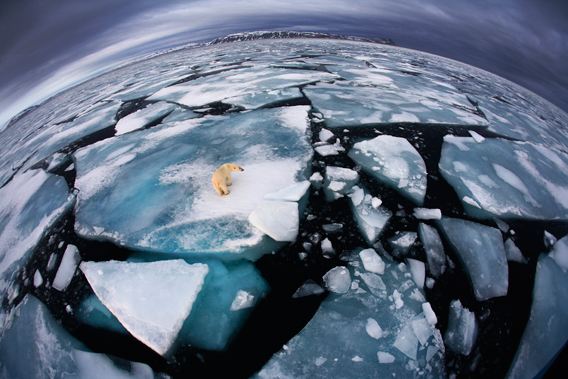 Anna was on a boat in Svalbard – an archipelago midway between mainland Norway and the North Pole
– when she saw this polar bear at around four in the morning. It was October, and the bear was walking
on broken-up ice floes, seemingly tentatively, not quite sure where to trust its weight. She used her
fisheye lens to make the enormous animal appear diminutive and create an impression of ‘the top
predator on top of the planet, with its ice world breaking up’. The symbolism, of course, is that polar
bears rely almost entirely on the marine sea ice environment for their survival, and year by year,
increasing temperatures are reducing the amount of ice cover and the amount of time available for the
bears to hunt marine mammals. Scientists maintain that the melting of the ice will soon become a major
problem for humans as well as polar bears, not just because of rising sea levels but also because
increasing sea temperatures are affecting the weather, sea currents and fish stocks. Photo by: Anna Henly (UK) /2012: Veolia Environnement Winner The World in Our Hands Award. 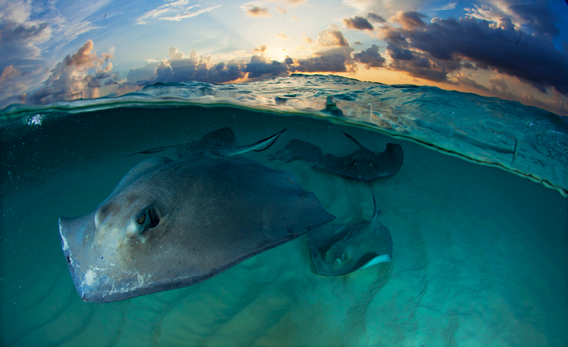 North Sound, off the island of Grand Cayman, is a hotspot for ‘friendly’ southern stingrays – individuals
accustomed to interacting with humans. Fishermen historically discarded their unwanted fish parts once
they reached the calm waters of the sandbar at the Sound. The stingrays gathered for an easy meal and
learnt to associate the boat-engine noise with food. Today, snorkellers gather in the waist-deep water to
meet these charismatic fish. Inspired by David Doubilet’s original split-level portrait of a Cayman
stingray, Claudio set out to capture an image of the stingrays with a different perspective. ‘There were
about 75 of them undulating through the shallows,’ he says. Balancing the light was a problem ‘because
of the extremes in contrast between the dramatic evening sky and sandy sea bottom’, but keeping
people out of the picture proved to be more of a challenge than executing the composition. Photo by: Claudio Gazzaroli (Switzerland) /2012: Veolia Environnement Underwater Worlds, Specially Commended. 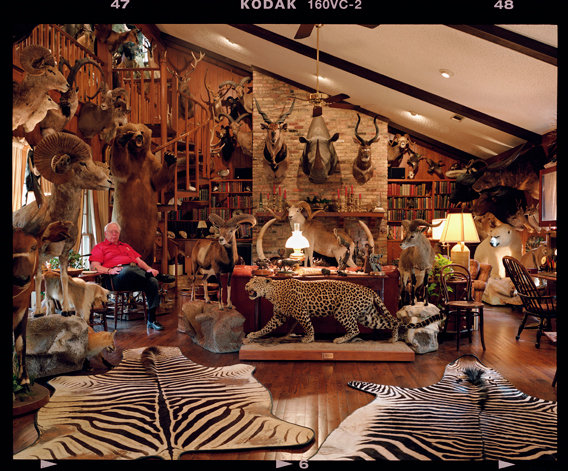 The sheer diversity of stuffed animals in the one room is extraordinary, but the focal point is not the
leopard or the rhino but the man with the cigar, relaxed in the corner. He is a lawyer from Dallas, Texas,
and has shot all of the animals. In fact, his collection amounts to more than 230 stuffed and mounted
trophies, which he has killed during a lifetime of hunting. He is a recipient of the Dallas Safari Club Africa
Big Game Award for his collection of African elephant, buffalo, lion and leopard, and the Outstanding
Hunting Achievement Award for his 30-year quest and collection of all 30 North American ‘big game’
animals, of which 15 are ‘records class’ (big). The picture is one of a series of thought-provoking images
that David has taken to ‘illustrate the complex relationship between man and animal, hunter and
hunted’. Photo by: David Chancellor (UK) /2012: Veolia Environnement Runner-up The World in Our Hands Award. 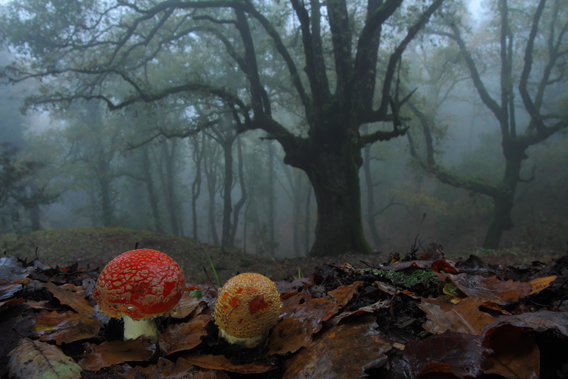 It was a cold, foggy, drizzly day – perfect conditions for searching for and photographing the many types
of fungi pushing up through the fallen leaves on the forest floor of Los Alcornocales Natural Park in
Andalucía, southern Spain. ‘It had been a very wet year, and the atmosphere in the woodland was
wonderful,’ says Andrés. ‘I love photographing fly agaric fungi, but I’d never tried using a wide-angle lens
to capture the perspective in this way before.’ To do so required spending some time lying in the leaflitter
in the rain, not just to get on eye-level with the fruiting bodies but also to show the overarching,
ancient, pollarded Andalucían oak in the background. The fungal fruiting bodies are produced by a vast
web of mycelium threads – the main body of the fungus – spread through the soil and leaf-litter and
living in association with trees, in this case, birch.Photo by: Andrés Miguel (Spain) /2012: Veolia Environnement Botanical Realms Commended.