Commentary by Zach Fitzner on 8 October 2012 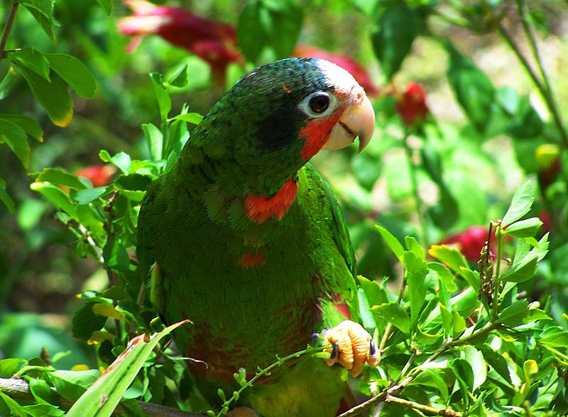 Cuban Amazon in the Grand Cayman islands, a different subspecies than the Bahamas’ Cuban Amazon. Photo by: Lhb1239.

I think about extinction a lot. It’s only natural for someone in my line of work. On my way to work I drive past the Colorado National Monument. Even from a distance it’s impressive: piles of dark schist 1,500 million years old; Wingate sandstone from the age of dinosaurs, all of it formed into cliffs, carved into spires. I can see Independence monument from the highway; a tall tower of tan sandstone that John Otto climbed near the beginning of the 20th century without rope. The monument is a display of the massive changes in the world. I often think about the rainforests and the oceans that once covered the land. Ecosystems have come and gone, the planet destroyed and rebuilt over and over.

I get to work in the morning and the reminders of the past don’t stop. Piles of fossil casts line shelves, sit on tables, and often clutter the floor. The walls are covered by old skulls and artifacts; dugout canoes hang from the ceiling, more reminders of a world long lost and of one we seem to be losing. On any given day I might work on creating a replica of a skeleton of an extinct tyrannosaur, an armored fish or a giant sloth.

So it’s natural for me to think of the possibility of modern extinction when I work with living animals. I recently spent three months working with the Cuban Amazon (Amazona leucocephala bahamensis) on Abaco Island in the Bahamas. The Cuban Amazon is an unassuming little parrot living in forests of Caribbean pine next to beaches sought out by generation after generation of happy honeymooners. The bird is attractive but not breathtaking, certainly not awe inspiring. In fact, one of the other interns thought the parrot was a bit ugly before seeing one up close. It’s an animal that grows on you. They’re small compared to a scarlet macaw, close to the size of a puffin or a really large pigeon. Seen on the white page of a field guide, the parrot is vibrant in color, so it’s surprising how well they blend into their environment. Their bodies are a bright green with bright blue feathers at the fringe of the wings that are usually only seen when they’re in flight. Their faces are white and their necks a bright scarlet. They have hooked beaks that can do a nasty number on your hands (I received one bite over the summer but nothing debilitating) and strong feet for grasping branches, pine cones, and the fingers of biologists banding them.

The parrots nest in limestone cavities, a very unusual home for a bird. Abaco is built of old coral reef systems. Through the magic of geological alchemy, the reefs have been turned into a limestone island riddled with caves and little pockets like the ones the parrots nest in. A quick look around the pine forest and the benefit of nesting in small holes in the ground, especially limestone holes, becomes obvious. Bits of ash cling to the pine trees that all exhibit obvious signs of fire; the Caribbean pine is a tree adapted to an ecosystem with lots of periodic fires. No place in the forest could be safer from fire than underground in a limestone parrot bunker. This is just one hypothesis to explain a limestone cavity nesting behavior, but it’s an explanation that makes good sense.

A large part of my work with the parrots involved watching them for nest behaviors, watching them reveal their nest locations. It’s striking how careful they can be, how the approach to the nest is a slow dance of a parrot dropping lower and lower, flitting back and forth. Even when a parrot is invisible, on the ground in the understory, she may have landed several feet from the nest, crawling the rest of the way, relatively hidden from predators.

Still, there is that thought of extinction I mentioned earlier, the thought that conjures images of those ghastly, spectral, giant skeletons I sometimes work with. If the parrot is so cautious, protecting its nest and sneaking home to remain undetected from predators, what could be the danger? People. Of course, people are the danger. This is a familiar story but the details are more complex than the same old parable told everywhere else. How endangered the Cuban Amazon is depends on its designation as one species instead of several. The PhD student I worked for in the Bahamas appealed to the American Ornithologists Union to have the status of the Bahamas parrot officially changed from that of a subspecies to its own species. If it became its own species, it would be obvious how endangered it is. Even as a single species—instead of several differing species—the population is not as strong as it once was. Numbers of the Cuban Amazon in Cuba are down and several islands where it once lived have no parrots at all now. A remnant population clings to Cuba and Isle of Pines, as well as Great Inagua and, of course, Abaco in the Bahamas. They once lived on all of the islands of the Bahamas but have been extirpated from all but the two. If the new species designation was made official, it would mean that the relatively small population on Abaco and Great Inagua would be all that is left of a species. The main threats to the parrots on Abaco are the pet trade and predation by house cats.

Banding parrot chicks is a lot of work. You have to reach deep into the limestone nest cavity with a net and carefully scoop a screaming, wriggling chick into it and pull it out. The chicks don’t stop screaming when you pull them out into the sun. If anything their cries become more frantic and deafening. Holding a screaming parrot chick is not like holding a fluffy kitten or puppy. Parrot chicks look awkward and hideous in an endearing way. They’re either almost completely bald and pink, looking like shapeless blobs of flesh with angry shrieking beaks, or, when a little older, covered by pin-like feathers sticking out everywhere, making them look like bizarre hedgehogs. Juveniles look almost like their adult counterparts and are usually banded already. After the bird is out of the nest, it’s important to keep them as safe as possible, such as making sure they’re in the shade. There can’t be anything comfortable about being held by a giant monster while another draws your blood or squeezes metal bands over your feet. When the procedure is complete, the chicks are returned to the cavity, usually still screaming.

The first nest that I helped band mysteriously lost all of its chicks. It’s very likely that those chicks were captured and sold in the pet trade. The nest they disappeared from is one we learned later had a reputation in the community. It was a large cavity, easy to reach into, with chicks ready to be sold for thousands of dollars in Miami. Every individual of a species doesn’t have to actually die for that species to become ecologically extinct. The species just has to be completely divorced from its ecosystem, completely removed from the wild.

The sad truth is that besides being sold into the pet trade, the Cuban Amazon has other very real threats. One of the major threats is the house cat. It has been estimated that house cat predation is the number one cause of death for song birds in North America. It’s no less true that in Abaco house cats are a big problem for parrots. This is where the Bahamas National Trust (a pseudo government agency similar to the National Park Service) comes in. Not only have they created a park system, they’ve created a predator control program. There’s a man in South Abaco whose job, among other things, is to hunt house cats. He leaves in the early morning, the back of his truck full of his hunting dogs of no distinct breed, radio collars strapped to their necks. He carries a shotgun in the cab with him; sometimes the cats get treed out of the dogs reach or he needs to take care of them himself for any number of other reasons. We also set up electric fences around nest cavities to test their effectiveness against cats. It’s a continuing battle, not one that is likely ever to end. People continue to buy cats; cats continue to breed; some of those cats will wander into the forest of South Abaco. Beyond that, there will be more growth, more tourists and more people wanting to retire to a subtropical paradise they will discover in Abaco. The pressures on the parrots will only increase, and to keep them extant, work will have to continue indefinitely. The question we have to ask, as we’ve had to worldwide with so many species, is: how much is the Cuban Amazon worth? With any luck, the work will continue and the parrot will have a bright future. This work, however, is always propping a species up, never bringing it lasting security. If the work stops for a short time, numerous threats could snuff out a unique lineage. The labor is Sisyphean; conservation is always working to maintain the status quo, fighting against a final, inevitable defeat. What we must ask is: when can a species go extinct and when should we fight to the end for it?

These are the things I wonder about as I cast those cumbersome skeletons of shovel nosed elephants and ankylosaurs. The truth is that most animals that have lived on this planet have gone extinct. The difference now is that we as humans have the power to cause, or to prevent (at least for a time) extinctions. May we learn to wield this power wisely for the sake of the parrots on Abaco and for life everywhere.

A pet Cuban Amazon in Cuba. The pet trade is one of the largest threats to the species. Photo by: Alex Graves.

(08/23/2012) Found in only one location in northern Bolivia, the blue-throated macaw (Ara glaucogularis) is thought to number little more than 100 individuals in the wild. However the species is protected from utter extinction by a much larger captive population.

Genetic analysis uncovers new parrot on the edge of extinction

(11/23/2010) Down to just over 100 individuals, DNA analysis has revealed one of the world’s most imperiled bird species: the western ground parrot Pezoporus flaviventris.. Genetic evidence collected from museums specimens, some well-over a century old, have led scientists to “cautiously suggest” that Australia’s ground parrot be split into two distinct species—the eastern and the western—and not subspecies as they are currently considered. According to the study, the ground parrot species split apart some two million years ago, around the same time as the first members of the genus Homo evolved.

(07/18/2007) One of the world’s rarest parrots has made a remarkable recovery due to conservation efforts, reports the American Bird Conservancy.