A new book of essays by mongabay.com reporter, Jeremy Hance, has earned a starred review from Publisher’s Weekly, a top book reviewer for the publishing industry. Hance’s book, Life is Good: Conservation in an Age of Mass Extinction, highlights the struggle of species to survive in a rapidly changing world through a series of essays that span the globe. Rarely bestowed, a starred review translates into “outstanding in its genre.”

“I’m thrilled to see that Publisher’s Weekly recognized Jeremy Hance’s fine work with a starred review. Life is Good artfully guides the reader through the complexities of a range of conservation issues, illuminating the importance of saving the things that make nature wild,” Rhett Butler, founder and head of mongabay.com said. Hance has been writing for mongabay.com since 2007, filing over 2,000 stories to date.

Essays in the book cover global problems such as converging threats on the world’s oceans and the decline of big migrations, while also exploring individual conservationists fighting to save a single species from extinction like the Sumatran rhino or the leatherback marine turtle. Philosophical issues, such as forgetting what we have lost and the role of zoos in modern society, are also examined.

The review in Publisher’s Weekly calls the book “bold” and “well-researched,” going on to say that the “the collection manages to raise environmental alarms without falling into hopeless predictions of doom.” Published earlier this year on Amazon’s Create Space, Life is Good is available in paperback on Amazon.com or on the Kindle. 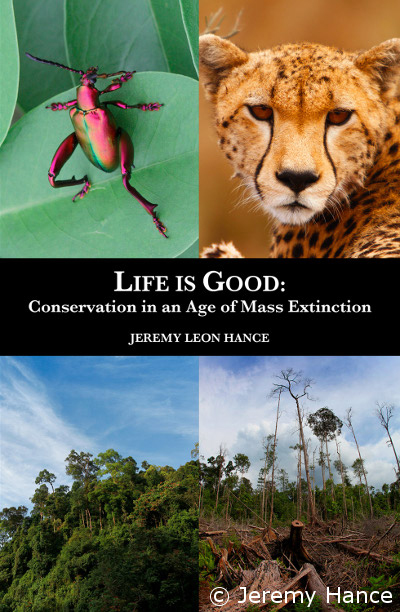