Is your Halloween candy linked to rainforest destruction? 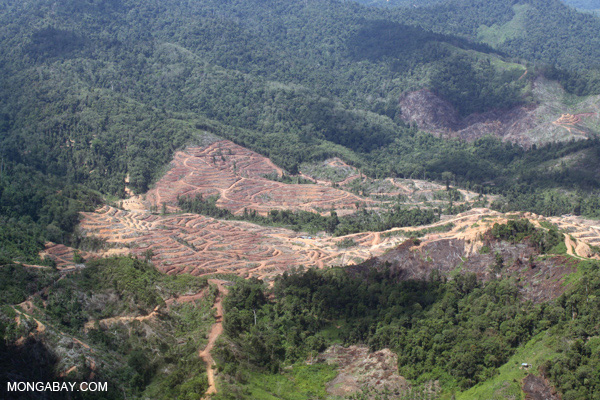 Oil palm plantations and rainforest in Malaysian Borneo. Photo by: Rhett A. Butler.

A campaign by the Cheyenne Mountain Zoo hopes to raise awareness about the link between Halloween candy and deforestation in Indonesia and Malaysia. Employing the images of Critically Endangered orangutans, the zoo urges consumer to only buy candy containing eco-certified palm oil by the Round Table on Sustainable Palm Oil (RSPO).

Palm oil, which is an incredibly productive vegetable oil, has become ubiquitous in recent decades in many products: from cosmetics to convenience foods, as well as popular Halloween candies. While the industry has been a boom to the nations’ economies, its rapid expansion has been blamed in part for vast deforestation across Malaysia and Indonesia; in fact a recent paper for the 90 percent of palm oil plantations in the Malaysian state of Kalimantan came at the expense of forests.

Orangutans are unable to survive in the long-term in oil palm plantations as they lose their major food sources. In addition, sometimes they are hunted down as pests. This situation has led to increasingly overcrowded orangutan orphanages. However, the destruction of these forests, some of the most biodiverse in the region, not only imperils orangutans, but thousands of other species, some still unknown to science.

The Cheyenne Mountain Zoo has created a PDF file that is “meant to be a helpful guide for consumers that are concerned about orangutan conservation and deforestation due to non-sustainable palm oil production in Indonesia and Malaysia,” and urges consumers to only purchase candy by RSPO members, a list that includes Nestle, Kellogg’s, Hershey’s and Mars among others.

“If you do not find your favorite snack/company on this list,” the zoo writes, “take action by writing a letter and asking the company to join the RSPO and be committed to using certified sustainable palm oil.”

Palm oil need not come at expense of the environment

(08/16/2012) Palm oil production need not come at the expense of the environment, says Greenpeace in a new campaign that highlights a smallholder approach used by a community in Riau Province on the island of Sumatra.