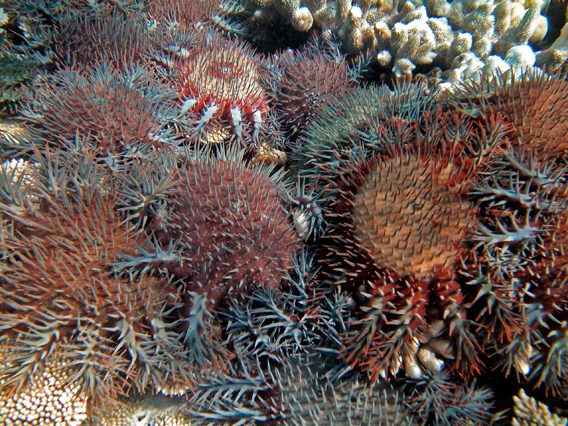 Outbreaks of the coral eating crown of thorns starfish have been responsible for 42 percent of the decline in coral cover on the Great Barrier Reef between 1985 and 2012. Photo by: Katharina Fabricius, Australian Institute of Marine Science.

The Great Barrier Reef has lost half of its coral cover in the last 27 years, according to a new study released today in the Proceedings of the National Academy of Sciences (PNAS). Based on over 2,000 surveys from 1985 to this year the study links the alarming loss to three impacts: tropical cyclone damage, outbreaks crown-of-thorns starfish that devour corals, and coral bleaching.

“We can’t stop the storms, and ocean warming (the primary cause of coral bleaching) is one of the critical impacts of the global climate change. However, we can act to reduce the impact of crown of thorns,” says John Gunn, the head of the Australian Institute of Marine Science (AIMS), which conducted the research.

Crown-of-thorns starfish (Acanthaster planci), the world’s second largest seastar and a renowned predator of coral, have seen several outbreaks in the Great Barrier Reef during the past few decades. Outbreaks of the coral-chomping invertebrates are believed to have increased from one every 50-80 years to one every 15 years, which scientists have linked in part to fertilizer and chemical runoff from the mainland.

In total, the researchers found that 42 percent of coral loss could be linked the crown-of-thorns outbreaks, 48 percent to tropical cyclones, and 10 percent to coral bleaching. The annual loss of coral cover has sped up as well, averaging 1.45 percent annually since 2006.

This pummeling, occurring too quickly for many reefs to recover, currently leaves the Great Barrier Reef with a total coral cover of less than 14 percent, down from 28 percent in 1985. The findings are similar to declines seen in other coral reefs worldwide, such as coral cover in the Caribbean which has fallen from 55 percent in 1977 to just 10 percent today. However, the Great Barrier Reef has long been seen as a rare bright spot in coral conservation.

“Great Barrier reefs have been classified as the world’s least threatened coral reefs due to their distance from the relatively small human population centers and strong legal protection,” the authors note. Still, even with strong conservation measures, researchers fear the coral cover could drop to just 7 percent by 2022.

“The study shows that in the absence of crown-of horns, coral cover would increase at 0.89 percent per year, so even with losses due to cyclones and bleaching there should be slow recovery,” Gunn says.

Ultimately, however, the scientists say climate change will have to be dealt with if the Great Barrier Reef, like the rest of world’s corals, is to have a good chance of survival.

“Cyclone intensities are increasing with warming ocean temperatures, although projected increases are greater for the Northern Hemisphere than for the Southern Hemisphere. The recent frequency and intensity of mass coral bleaching are of major concern, and are directly attributable to rising atmospheric greenhouse gases,” the scientists write, adding that “mitigation of global warming and ocean acidification is essential for the future of the Great Barrier Reef.”