By imitating human voices, beluga whale may have been attempting to communicate 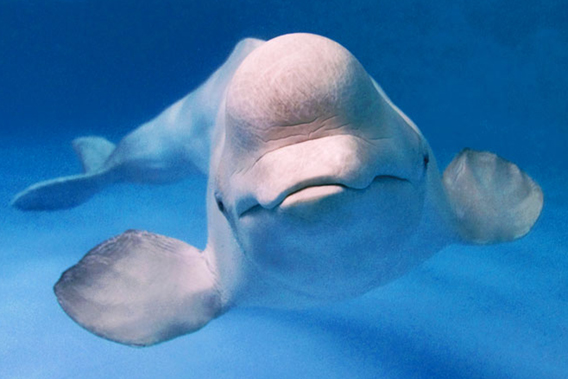 Five years after the death of a captive beluga whale named NOC, researchers have discovered that the marine mammal may have been trying to communicate with people by mimicking humans voices at the National Marine Mammal Foundation in San Diego. Analyzing tapes of human-like speech from the young male beluga whale, scientists writing in Current Biology note that while there have been reports of beluga whales making human like sounds before, this is the first time evidence has been captured on tape and analyzed.

“Our observations suggest that the whale had to modify its vocal mechanics in order to make the speech-like sounds,” says lead author of the study, Sam Ridgway of the National Marine Mammal Foundation. “Such obvious effort suggests motivation for contact.”

NOC’s attempts at human-like speech first caught the attention of researchers in the mid-1980s when the heard garbled voices from the whale and dolphin pens. It wasn’t until later until they pinned down the source: a young male named NOC, who “spoke” for about four years until he hit sexual maturity. All the more remarkable, was the fact that NOC was mimicking human-speech spontaneously, i.e keepers never gave him lessons.

“The sounds we heard were clearly an example of vocal learning by the white whale,” Ridgway says.

Ridgway and colleagues say that NOC made considerable effort to be heard. In order to speak like a human, the whale would’ve had to increase the usual pressure in his nasal tract; control his “phonic lips”, vocal muscles above the nasal tract; and inflate the vestibular sac in his blowhole. All in order to lower the octaves of his sound to more-closely match human speech.

Whether or not VOC was actually trying to communicate with his handlers–he only made the sounds when alone or with people, and not with his fellow belugas–or simply mimicked the sounds around him, he certainly pushed the limits of his ability to vocalize. While the scientists admit that NOC’s vocalizations don’t sound as familiar as those made by some birds, such as parrots, they are clear indications of spontaneous learning by a marine mammal.

Beluga whales (Delphinapterus leucas) are known in the wild, as well as captivity, for their tendency to chatter, giving them the moniker of “sea canaries.” Found throughout the Arctic, the species is considered Near Threatened by the IUCN Red List, however some populations are in danger of collapse. Over-hunting is the most well-documented threat to belugas, but expanding oil and gas development, noise pollution, industrial fishing, and pollution may also be imperiling the species.

(10/09/2012) To prevent conflicts between humans and elephants in developed areas, a new study shows there is much to learn from analyzing Asian elephant behavior at the individual level as opposed to population studies. Researchers have traditionally interpreted elephant behavior at the population level, looking for behavior patterns among elephants of similar ages, group sizes, and genders. Today, field researchers in India are studying elephant behavior at the individual level. Their goal is to appreciate the idiosyncrasies of individual elephants in the hopes of predicting their behavior. Nishant Srinivasaiah, of the Tata Institute of Fundamental Research and lead author of the study, told mongabay.com that it is vital “to get to know our elephants more intimately than ever before and, more importantly, to shift our focus from a population to include its individuals as well.”