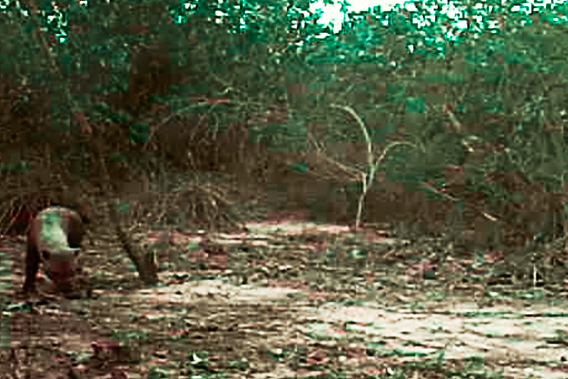 South America’s rare and little-known bush dog (Speothos venaticus) looks like a miniature dachshund who went bad: leaner, meaner, and not one to cuddle on your lap, the bush dog is found in 11 South American countries, but scientists believe it’s rare in all of its habitats, which include the Amazon, the Pantanal wetlands, and the cerrado savannah. Given its scarcity, little is known about its wanderings. For example, the pack hunting predator was thought extinct from the Brazilian state of Minas Gerais for decades; but now, after a seven-year venture scientists have caught a bush dog on remote camera trap film in the state’s Veredas do Peruaçu protected area, according to World Wide Fund for Nature (WWF), Brasil.

“Being an extremely rare animal, any information about the bush dog is important. It is even more important in the region because the animal was thought to be extinct in Minas Gerais state (Southeastern Brazil) until a foot print was found in 2005 in Peruaçu River Valley,” biologist Guilherme Ferreira, with the Biotropicos Institute, a partner of WWF-Brasil, explained to mongabay.com. “After the identification of this footprint we started a quest to record the bush dogs using [camera traps]. After more than seven years of camera trapping a 1.5 second video of a bush dog was recorded last September, finally confirming the presence of the species in the region.”

In the video a single, hazy bush dog sniffs the ground before bolting out of frame.

“Recording bush dogs in this region is also emblematic because it was at Minas Gerais state that the bush dog was first described to science by the Danish paleontologist Peter Lund, in 1842,” Ferreria adds.

Bush dogs were first discovered as fossils in caves in Minas Gerais. Paleontologists assumed the creatures were long extinct until living packs were found years later.

While bush dogs are currently listed as Near Threatened by the IUCN Red List, scientists have little hard estimates of population sizes. In Minas Gerais, the species is considered critically threatened.

“Habitat loss is one of the main threat for the species. Other important threats are predation by domestic dogs, diseases transmitted from domestic animals—especially domestic dogs—and decrease of prey population due to poaching.”

Veredas do Peruaçu State Park, where the video was taken, protects over 30,000 hectares of the cerrado ecosystem. The cerrado—savannah land that covers about a quarter of Brazil—has been under siege in recent decades, vanishing twice as fast as the the Amazon rainforest. Much of the land is being converted into mechanized soy farms and cattle ranches. Currently about 7.5 percent of the cerrado is under protection.

There has been little targeted conservation efforts for the bush dog in Minas Gerais or elsewhere, and Ferreria says local people are largely unaware of the slinky predator’s existence.

“At Peruaçu River Valley most people have never seen bush dogs or even know how they look like, although some people may have heard about the animal while talking with members of our team or park managers,” he notes. “For the population outside the valley the animal is almost unknown.”

Built for water hunting, bush dogs have webbed toes and are almost always found near water. They prey on big South American rodents, including agouti, paca, and even the world’s largest rodent, the 50 kilogram (110 pound) capybara. Bush dogs are also known to kill ground birds and lizards. 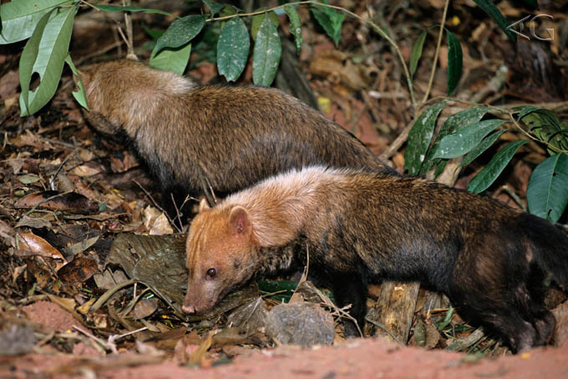 Bush dogs in the wild. Photo by: Adriano Gambarini.

(09/17/2012) Known for its abnormally long lanky legs, its reddish-orange coat, and its omnivorous diet, the maned wolf (Chrysocyon brachyurus) is one of the more beautiful and bizarre predators of South America. However its stronghold, the Brazilian Cerrado, is vanishing rapidly to industrialized agriculture and urban development. Now, a new study in mongabay.com’s open access journal Tropical Conservation Science reveals the key role of buffer zones and unprotected areas in keeping the maned wolf from extinction in the Cerrado savannah, where only 2 percent of the ecosystem is under protection.

(04/11/2012) Indigenous populations in the Amazon successfully farmed without the use of fire before the arrival of Europeans, demonstrating a potentially sustainable approach to land management in a region that is increasingly vulnerable to man-made fires.