A new way to measure the ocean’s health 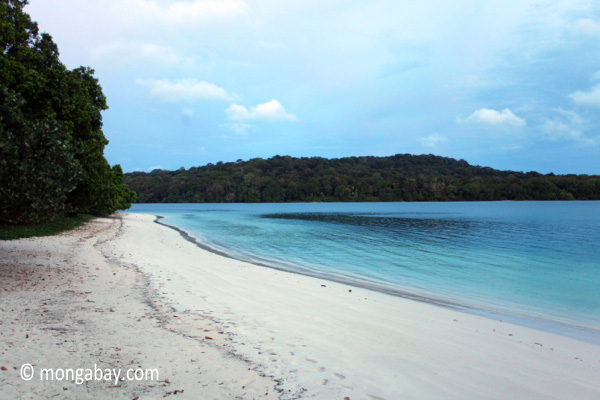 Beach on Peucang Island overlooks the ocean. Photo by: Rhett A. Butler.

A diverse array of institutions have come together to release a new, revolutionary ocean health assessment called the Ocean Health Index. Researchers formed the index in order to gauge the health of the world’s oceans. The index is the result of a huge collaborative effort, including top researchers crossing a diverse range of disciplines such as the National Center for Ecological Analysis and Synthesis (NCEAS) and Conservation International.

So what is ocean health? The Ocean Health Index defines a healthy ocean as “one that sustainably delivers a range of benefits to people both presently and in the future, it also maintains or increases benefits (food and services) in the long term, without jeopardizing the health or function of the web of life that lies in the ocean.”

Social, political, economic and ecological factors contributing to ocean health have all been used to determine the ocean health index. The Index is the first of its kind to combine all of these elements into one quantifiable measure by using ten widely accepted goals, representative of ocean health. Each goal is assigned a score (out of 100) for a particular marine region (all 10 must be met for a country’s ocean to be rated as healthy, but the relative importance of each goal can vary from place to place). Additionally, penalties (scoring penalties) are given to countries that do not plan to sustainably deliver each goal.

Relative marine health is represented by the average score. A high score reflects that humans are utilizing marine resources in a way that still allows the ocean to thrive and provide resources both now and in the future.

The Index draws on numerous existing indices to support data caches—including the Global Competitive Index, Mari-culture Sustainability Index, Tourism and Travel Competitive Index, and World Governance Indicators, as well as information from treaties and international projects such as the Convention on Biological Diversity, Convention on International Trade in Endangered Species and IUCN Red List.

Likely future conditions of ocean health may be estimated as well. Trends (the average percent change in the present status for the most recent 5 years of data), pressures (the sum of the ecological and social pressures that negatively affect scores for a goal) and resilience (the sum of the ecological factors and social initiatives (policies, laws etc.) that can positively affect scores for a goal by reducing or eliminating pressures) can help inform likely future conditions and appropriate management actions.

Oceans are the world’s most valuable asset. They hold 97% of the world’s water, produce over half of the oxygen life needs to survive, regulate the planet’s climate and harbor some of the most important and fascinating biodiversity that exists. Not to mention that oceans are also responsible for supplementing world economy with $3 trillion USD per year. The world’s population is expected to reach 9 billion by 2050; the pressure on our oceans is set to become even more exacerbated.

The Ocean Health Assessment really stands apart from traditional ocean assessments by recognizing the human benefits derived from the world’s oceans and how we may sustainably manage the oceans so that these benefits are retained for future generations. Previous assessments tended to focus largely on the negative impacts induced on the environment through human activity (e.g. an International Program on the State of the Ocean study linked humans to mass extinctions). The Index also aims to provide opportunity in developing and monitoring sustainable management.

Currently, oceans across the globe are being exploited unsustainably. The vast numbers of people who use and depend on the ocean, coupled with poor management, have caused problems such as overharvesting of resources, reduction in biodiversity, degradation of marine habitats and risk of extinction of species, among others. Most scientists believe, however, that there is still enough time for us to act and have a positive impact on our oceans’ health.

Proponents of the Index argue it could be crucial in raising the bar on ocean health.

“The index is backed by pure science and it is our intention to see that it is used to influence people who have the ability to alter policy for the oceans to make the right choices for our future before it is too late,” said Wrigley.

The Index provides policy makers with a tool for identifying areas of improvement, prioritizing those areas, assisting in the development of a plan in order to reach goals, identifying potential trade-offs among uses and measuring the effectiveness of plans and progress toward goals and contrasting it with global ocean health.

Countries’ scores ranged from 36 (Sierra Leone) to 86 (Jarvis Island, an uninhabited island of the U.S. territories in the South Pacific). As expected, developed countries tended to score higher because they have more resources for protection and import seafood etc. whereas developing countries have fewer resources and often see resources, such as fish, plundered for wealthier consumption.

CITATION: Halpern, B S. et al [2012]. An index to assess the health and benefits of the global ocean. Nature.