Editor’s note: the photo and corresponding caption immediately below were updated to reflect new information from Greenpeace on September 28, 2012 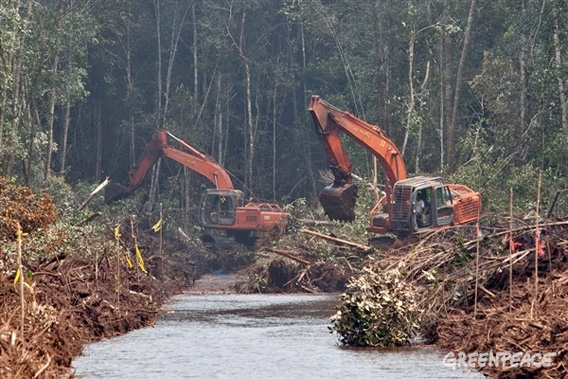 Asia Pulp & Paper (APP) must stop accepting timber sourced from clearance of rainforests and peatlands for its sustainability pact to have any credibility, says Greenpeace.

Responding to a report that the Indonesian forestry giant is working with The Forest Trust, a Switzerland-based NGO, to clean up its supply chain, Bustar Maitar of Greenpeace Southeast Asia told mongabay.com that APP must make a firm commitment on its sourcing practices.

“APP must immediately stop accepting timber from natural forest clearance and confirm that no expansion will take place unless that expansion and the rest of APP’s production is wholly reliant on plantation fiber,” Maitar said. “It’s only through this action, not through it’s PR campaign or choice of NGO partner, that APP can start to build any credibility with stakeholders and its many ex customers around the world.”


“APP continues to rely on natural forest clearance in Indonesia to feed its existing pulp mills and also now plans to build one of the world’s largest pulp mills in South Sumatra,” he added. “It is within this context that APP’s work with TFT must be seen.”

While APP has publicly downplayed any connection with the new mill in South Sumatra, media reports indicate that the project is backed by Sinar Mas Group, the conglomerate that owns APP. The pulp mill will allegedly have a capacity of 2 million tons per year and cost some $3 billion. Sinar Mas recently secured a $250 million loan from an unspecified bank in Indonesia, according to the Investor Daily, a sign that the conglomerate may be overcoming investor concerns tied to its $13.9 billion default in 2001.

Environmentalists are concerned that the new mill will put added pressure on natural forests in South Sumatra and adjacent provinces where there aren’t enough plantations to supply fiber to meet projected capacity. However APP says that any future mill expansion would have to be in line with its new “Sustainability Roadmap” for protecting high conservation value forest and rely only on “sustainable” plantation timber. APP also maintains that after 2015, new plantations will be subject to high carbon stock criteria, which should exclude peatlands and most forests from conversion.

APP has been dogged for years by environmentalists over its forest management practices. It, together with Asian Pacific Resources International Holdings Limited (APRIL), have been blamed for clearing vast swathes of carbon-dense tiger and orangutan habitat in Jambi and Riau Provinces on the island of Sumatra.