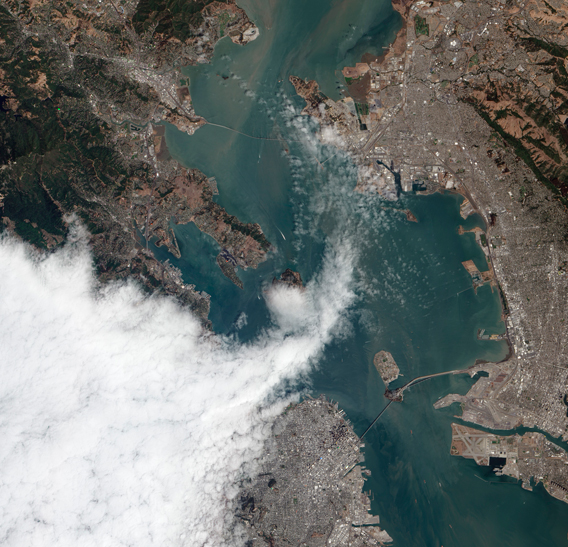 The short answer to why San Francisco, California is foggy? The Pacific Ocean’s marine layer. A new image by NASA’s Earth Observing-1 satellite shows the marine layer—cool, heavy air produced by a colder ocean surface meeting warmer air—encroaching on the metropolis. Western winds push the marine layer over the city, which brings dense cloud cover over the city, and often engulfs buildings, bridges, and people in fog. Fog is defined as suspended droplets that limit visibility to 1,000 meters (3,000 feet), anything less dense is technically considered mist.

This weather pattern is most common in the summer due to shifts in the California Current which brings an upwelling of frigid, deep water to the surface of the ocean. Once the cold water meets the warmer air, the marine layer is formed, blanketing San Francisco in its iconic fog.

(07/23/2012) Researchers are treating tadpoles in Kings Canyon National Park with a bacteria they hope will provide immunity to an infamous fungal disease, reports the San Francisco Gate. The bacteria could be key not only to saving California’s mountain yellow-legged frog (Rana muscosa), which is listed as Endangered by the IUCN Red List, but also frog species around the planet, many of which have been decimated by the chytrid fungal disease.

(07/13/2012) An illegal pesticide used by marijuana growers to kill rodents is poisoning weasel-like fishers in California, reports a new study published in the journal PLoS ONE.

(07/11/2012) Employees at San Francisco agencies will no longer be able to buy Apple products for official city business due to the computer giant’s decision to pull out of a green certification scheme for consumer electronics, reports the Wall Street Journal.