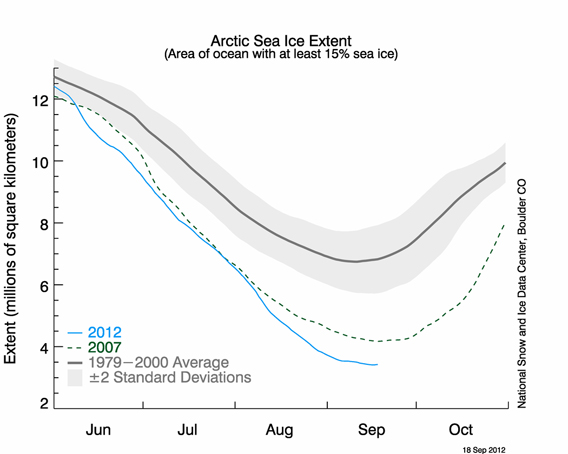 Sea ice extent hit a record low on August 26th, and then continued to decline another 700,000 square kilometers. Image courtesy of the U.S. National Snow and Ice Data Center (NSIDC).

Some twenty days after breaking the record for the lowest sea ice extent, the Arctic sea ice has hit a new rock bottom and finally begun its seasonal recovery. In the end, the Arctic sea ice extent fell to just 3.4 million square kilometers (1.32 million square miles) when only a few months ago scientists were wondering if it would break the 4 million square kilometers. The speed of the sea ice decline due to climate change has outpaced all the computer models, overrun all expert predictions, and shocked even the gloomiest scientists.

“We are now in uncharted territory,” Mark Serreze director of the U.S.’s National Snow and Ice Data Center, which tracks the sea ice, said in a press statement. “While we’ve long known that as the planet warms up, changes would be seen first and be most pronounced in the Arctic, few of us were prepared for how rapidly the changes would actually occur.”

Arctic sea ice extent hit 18 percent below the previous record set in 2007, and is now around half the size it was in 1980.

“This new record suggests the Arctic may have entered a new climate era, where a combination of thinner ice together with warmer air and ocean temperatures result in more ice loss each summer,” Julienne Stroeve, a research scientist with the NSIDC, said. Arctic sea ice extent is often dependent on weather conditions, which means it could rebound some next year, but scientists say thinner sea ice overall means the general trend is toward a complete loss.

Not long ago many scientists predicted the Arctic would be ice-free in the summer by 2100, but as sea ice continued to decline at a much faster-than-expected pace, predictions were moved up to 2050. Now, some researchers say the Arctic could be ice-free by the end of the next decade or even this one. Last week one scientist, Cambridge University’s Peter Wadhams, boldly predicted it could occur in just four years.

“Climate change is no longer something we can aim to do something about in a few decades’ time, and that we must not only urgently reduce CO2 emissions but must urgently examine other ways of slowing global warming, such as the various geoengineering ideas that have been put forward,” Wadhams told the Guardian on Monday.

Although satellite modeling of the Arctic has only been ongoing since the 1970s, past research has shown that it’s been at least 2.5 million years since Arctic was sea ice-free; modern humans have been around for 200,000 years.

“The sea ice in the Arctic is toast,” Andrew Weaver, a climatologist at the University of Victoria, told The Canadian Press. “But [action] may change whether or not we are toast too.”

The loss of Arctic sea ice is not only impacting iconic regional wildlife, such as polar bears, seals, and narwhals, but is also expected to worsen global climate change. Sea ice reflects sunlight back into space, but dark water absorbs the sunlight which will add further heat in the summer. There are additional concerns that loss of sea ice will lead to the melting of offshore permafrost, which could emit vast amounts of methane into the atmosphere, a greenhouse gas more potent than carbon.

New research also shows that the loss of Arctic sea ice may be impacting weather systems worldwide. More heat in the Arctic ocean—due to less sea ice overall—slows down and curves the jet stream, causing weather patterns to become stuck, known to meteorologists as blocking patterns. These long, unusual jet stream patterns have been blamed for extreme winters in the northern hemisphere, when a winding jet stream brings Arctic air south, and prolonged weather patterns, such as the heatwaves that hit the U.S. this year.

The news of the record melt pushed environmental groups to issue a new set of warnings over the global failure to urgently address climate change.

The head of Greenpeace, Kumi Naidoo, called the record melt “a defining moment in human history.”

“In just over 30 years we have altered the way our planet looks from space, and soon the North Pole may be completely ice free in summer,” he said. “Rather than dealing with the root causes of climate change the current response from our leaders is to watch the ice melt and then divide up the spoils.”

Many Arctic government, including the U.S. and Russia, have used the melting sea ice as a means to exploit the region for more fossil fuels, which, in turn, will invariably heat up the Earth further.

“There’s no place on Earth where we see the essential irony of our moment playing out more perfectly than in the Arctic,” said Bill McKibben, head of climate activist group 350.org. “Our response has not been alarm, or panic, or a sense of emergency. It has been: ‘Let’s go up there and drill for oil.’ There is no more perfect indictment of our failure to get to grips with the greatest problem we’ve ever faced.”

Another mishap kills Shell’s Arctic oil drilling for the year

(09/18/2012) Following global protests, a series of embarrassing mishaps, and a lengthy regulatory process, Dutch Royal Shell has announced it is abandoning its hugely controversial off-shore oil drilling in the Arctic—this year. The announcement came after the company damaged a containment dome meant to cap an oil spill. The incident was the latest in a series of delays and problems that oil the giant faced in its $4 billion plan to drill in the Chukchi and Beaufort Seas.