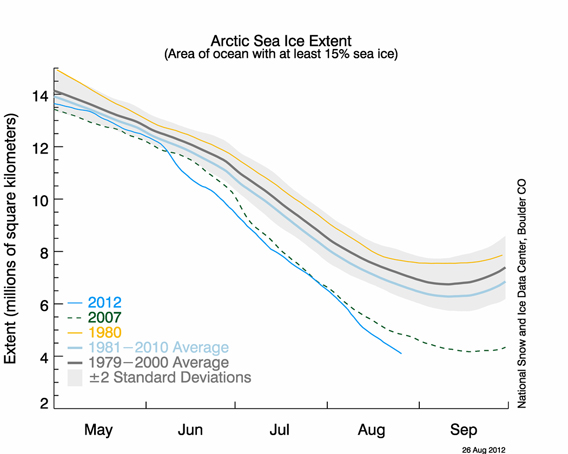 One of the most visible impacts of climate change—melting summer sea ice in the Arctic—just hit a new milestone. Scientists with the U.S. National Snow and Ice Data Center (NSIDC) have declared that this year’s Arctic sea ice extent dipped below the previous record set in 2007 as of yesterday. The record is even more notable, however, as it occurred more than a fortnight before the Arctic’s usual ice melt season ends, meaning the old record will likely not just be supplanted, but shattered.

“The persistent loss of perennial ice cover—ice that survives the melt season—led to this year’s record summertime retreat,” explains Joey Comiso, senior research scientist at NASA’s Goddard Space Flight Center, in a press release. “Unlike 2007, temperatures were not unusually warm in the Arctic this summer.”

As of yesterday, Arctic sea extent hit around 4.10 million square kilometers (1.58 million square miles), beating the 2007 record by 70,000 square kilometers—so far. Although satellite measurements of sea ice only go back to 1979, recent modeling research has found that the current decline in sea ice is unprecedented for at least the last 1,450 years.

Over the last decade, Arctic sea ice has been vanishing far faster than scientists predicted. Not long ago scientists thought the Arctic might be free of ice in the summer by 2100, but as sea ice continued to decline at a rate faster-than-expected that date was moved up to 2050. Now, some researchers say the Arctic could be ice-free by the end of the next decade or even this one, an event that hasn’t occurred for at least 2.5 million years.

“By itself it’s just a number, and occasionally records are going to get set. But in the context of what’s happened in the last several years and throughout the satellite record, it’s an indication that the Arctic sea ice cover is fundamentally changing,” says Walt Meier, a scientist with the NSIDC. The six lowest sea ice years have all occurred since 2007 according to the organization.

A loss of Arctic sea ice is expected to have major impacts on the region’s wildlife including polar bears, narwhals, walruses, and seals. Loss of sea ice is also expected to exacerbate regional warming as ice reflects sunlight back into space. Less sea ice, means more of the ocean is heating up.

Recent research also shows that the decline in Arctic sea ice could already be having an impact far afield. More heat in the Arctic ocean—due to less sea ice overall—slows down and curves the jet stream, causing bizarre weather patterns to become stuck, known to meteorologists as blocking patterns. For example, these odd jet stream patterns have been blamed for extreme winters in the northern hemisphere, when a winding jet stream brings Arctic air south, and longer-than-usual weather patterns, such as the prolonged heatwaves that hit the U.S. this year.

According to scientists, current climate change, which has warmed the Earth by 0.8 degrees Celsius (1.44 degrees Fahrenheit) since the early Twentieth Century, is caused by greenhouse gas emissions due to the burning of fossil fuels, such as coal, oil, and gas, as well as the destruction of carbon-rich ecosystems like rainforests.

(08/26/2012) On Friday the head of Greenpeace, Kumi Naidoo, and five other activists occupied an Arctic oil platform owned by Russian oil and gas giant Gazprom to protest exploiting fossil fuel beds in the Arctic ocean. The action by Greenpeace was short-lived after workers began spraying them with cold water from high-powered hoses and then threw pieces of metal at them, according to Naidoo, who communicated via Twitter during the civil disobedience.