Picture of the day: Yao Ming with baby elephant orphaned by ivory trade 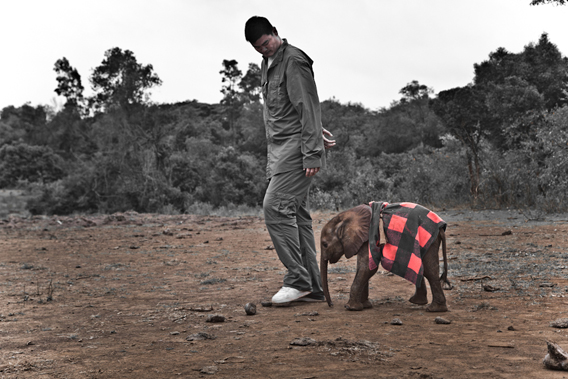 Yao Ming walks with Kinango, an infant elephant whose mother was killed by poachers at the David Sheldrick Wildlife Trust in Kenya. Photo by: Kristian Schmidt/WildAid.

Former NBA Basketball player and Olympian, Yao Ming is taking his first trip through Africa in order to see the on-the-ground impacts of the black-market ivory and rhino trades in East Asia. Ming, who stands 7-and-a-half feet (2.3 meters), has become not only well-known for his athletic prowess, but also his devotion to endangered wildlife.

After highlighting the shark finning trade, Yao Ming is now working with Wild Aid to shine a light on the bloody nature of the ivory and rhino horn trades, which has decimated the animals’ populations across Africa. Elephant poaching is at its highest level since 1989, while last year saw 448 rhinos killed for their horn in South Africa alone.

“While in Namunyak, Northern Kenya, I come across a sight I will not soon forget…” Ming writes on his blog of encountering the carcass of an elephant slaughtered for its tusks. “Since 2008, elephant poaching has been on the rise, according to Save the Elephants and the Kenya Wildlife Service. I’m told the main destination for illegal ivory is China.”