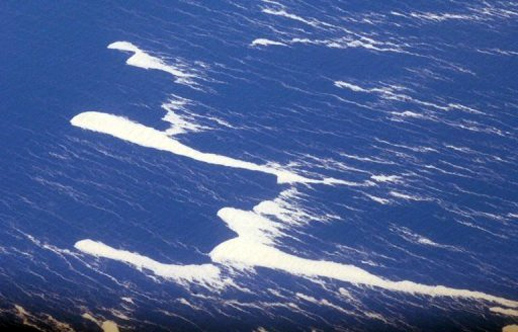 New Zealand’s Royal Navy has found a 10,000-square mile (26,000-square kilometer) patch of pumice floating on the surface of the South Pacific Ocean, reports the agency.

The zone of floating rock was first sighted early this week by a Royal New Zealand Air Force plane. A subsequent visit by a navy ship Thursday confirmed the spectacle.

“The lookout reported a shadow on the ocean ahead of us so I ordered the ship’s spotlight to be trained on the area. As far ahead as I could observe was a raft of pumice moving up and down with the swell.”

“The rock looked to be sitting two feet above the surface of the waves, and lit up a brilliant white color in the spotlight. It looked exactly like the edge of an ice shelf,” said LT Oscar. 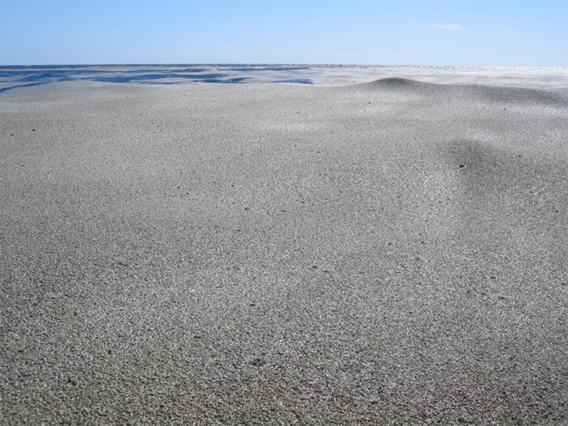 Pumice rafts after an unrelated volcanic eruption in the South Pacific. (Courtesy of the USGS and the Smithsonian Institution)

Pumice — solidified lava with trapped air bubbles — typically forms after a volcanic eruption. It is so lightweight that it floats on water.

Scientists are investigating the origin. According to New Zealand’s Royal Navy, it could have come from Monowai, an underwater volcano.

Lieutenant Oscar said the pumice island posted no threat to the navy ship, which powered right through it without damage. The floating rock zone is estimated to be 250 nautical miles long by 30 nautical miles wide.