by Caillie Mutterback on 7 August 2012 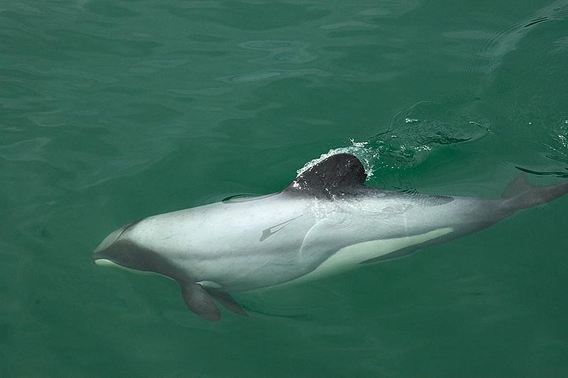 Hector’s dolphin, the parent species of the Maui’s dolphin. Photo by: James Shook.

The New Zealand government’s recent efforts to protect the world’s smallest dolphin have come under scrutiny from various conservation organizations at the 64th meeting of the International Whaling Commission (IWC). There are only 55 Maui dolphins (Cephalorhynchus hectori maui) now found on the west coast of New Zealand’s North Island, less than half the 2005 population with numbers continuing to decline. Less than 20 of the remaining Maui’s are breeding females and their slow reproductive rates make it difficult to increase their numbers when faced with an even bigger danger: fishing nets.

Weighing up to 110 pounds (50 kilograms) with a length of 1.7 meters, Maui’s dolphins are the smallest in the world. Their size is not the only thing that makes them unique; they are part of the only species of dolphin that has a round dorsal fin rather than a pointed one. They can also be easily identified by their distinctive grey, white and black markings and short snout.

Maui’s dolphin—a subspecies of Hector’s dolphin—are often caught and killed in the nylon gillnets and trawls used by fisherman in both protected and unprotected areas of New Zealand. Both Maui’s and Hector’s dolphin are listed as Critically Endangered by the IUCN Red List. The IWC’s Scientific Committee has highlighted research indicating that current protected areas are too small to adequately prevent this dolphin bycatch, a danger that exceeds sustainable levels almost 23 times in some areas.

“The IWC has confirmed what scientists have been pointing out all along, namely that numbers continue to decline because only a small fraction of the dolphins home is protected against gillnetting and trawling,” Dr. Barbara Maas, of the German conservation group NABU International that had published a report urging for the protection of these species. “New Zealand tried to deflect these criticisms by pointing towards a recent extension of the protected area for Maui’s dolphins. Yet New Zealand failed to mention that these measures are merely temporary, don’t include trawl fishing and do not apply to most of the dolphins’ habitat. They therefore fall short of the IWC’s directions and will not prevent the dolphins’ extinction.”

New Zealand measures, introduced under the Hectors and Maui’s Threat Management Plan, will ban set nets along the Taranaki coast from Pariokariwa Point to Hawera and out two nautical miles. Commercial fisherman may only use set nets from two to seven nautical miles, and only if there is an observer on board.

But Rebecca Bird, manager of the WWF-New Zealand’s Marine Program, says that it is “too little, too late.”

Bird notes “this area should have been fully protected back in 2008 when the government introduced new fishing restrictions. Yet it has taken more dead dolphins, an obstructive legal challenge by the fishing industry and further evidence of a serious decline in the population before the government acted.”

Concerned conservation organizations insist that the long-term plans proposed by New Zealand are not sufficient to protect the species from extinction. They are calling for immediate action from the New Zealand government that would ban the use of gillnets and trawlers throughout the Maui’s dolphins habitat. Community members have responded by joining campaigns and signing petitions to show their support for the organizations and the importance of saving the small cetacean.

(03/22/2012) The world’s smallest dolphin is also the closest to extinction. New Zealand government figures show that Maui’s dolphin (Cephalorhynchus hectori maui) are down to just 55 mature individuals, falling from 111 in 2005. The small cetaceans, measuring up to 1.7 meters (5.5 feet), are imperiled due to drowning in gillnets with the most recent death by a fisherman’s net occurring in January.