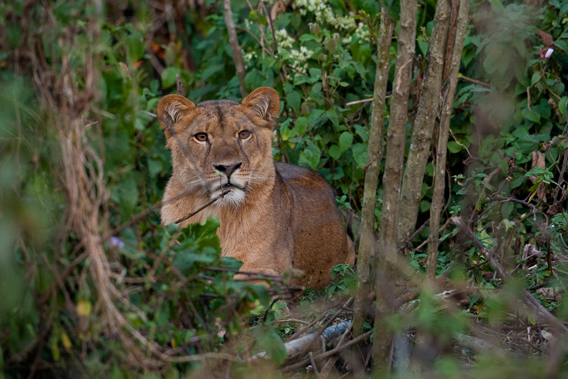 Female lion peers through the thick foliage of a montane rainforest in Ethiopia. Photo by: Bruno D’Amicis/NABU.

Calling the African lion (Panthera leo) the ‘king of the jungle’ is usually a misnomer, as the species is almost always found in savannah or dry forests, but recent photos by the Germany-based Nature and Biodiversity Conservation Union (NABU) document lions in Ethiopian rainforests. Taken in the Kafa Biosphere Reserve, the photos show a female lion hiding out in thick montane jungle.

“We are delighted with this news and look forward to studying these exceptional animals in their unusual habitat,” said NABU’s Vice-President Thomas Tennhardt in a press release. “To manage potential conflict with local communities, NABU will set up a dedicated conservation fund.” NABU has been working in the region since 2006.

Long known to locals, the lions are actually thought not to be permanent residents, but possibly passing through Kafa Biosphere Reserve in the dry season.

Although mighty, lions are gravely imperiled: habitat loss, prey depletion, hunting, poisonings, and conflict with humans have decimated Africa’s lions. In the last twenty years alone, the lion population is believed to have declined by 30 percent, prompting the species to be listed as Vulnerable on the IUNC Red List.

(10/20/2011) In the wild, the Asiatic lion subspecies (Panthera leo persica) survives only in India’s Gir Forest National Park in the north-western state of Gujarat with a population of just over 400 individuals. Around 90 survive in zoos. The subspecies is listed as Endangered by the IUCN Red List. Given its tiny population and the fact that it survives in a single location, the Asiatic lion continues to be threatened by in-breeding, disease, fires, and illegal mining. As well, conflict with villagers continues, and lions have been poached and poisoned in the past.

(03/23/2011) PUMA, the sporting goods brand, and its parent company PPR will offset their 2010 carbon dioxide emissions by purchasing carbon credits generated through conservation of wildlife habitat in Kenya.

Conservation groups propose ban on lion parts in US

(03/02/2011) It’s not widely known that the African lion ((Panthera leo) is currently threatened with extinction in the wild, but listed as Vulnerable by the IUCN Red List, the king of animals has declined by over 90% in the past 50 years (from 450,000 lions to between 20,000 and 40,000 today). While conservation work to save the species is on-going in Africa, efforts have now moved to the US as well, where a coalition of conservation groups are filing a petition with the US Department of the Interior to list lions as ‘endangered’ under the Endangered Species Act (ESA). Such a listing would make it illegal to bring lion parts in the country, including those killed by recreational trophy hunters.