UPDATE: After failing to slow down Gazprom by occupying its oil rig, Greenpeace is trying a different tact: activists have now attached their boat to a Gazprom passenger vessel preventing workers from reaching the oil rig and forcing an ongoing delay in operations. 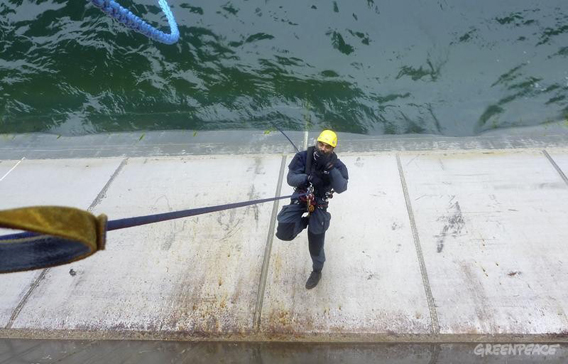 On Friday the head of Greenpeace, Kumi Naidoo, and five other activists occupied an Arctic oil platform owned by Russian oil and gas giant Gazprom to protest exploiting fossil fuel beds in the Arctic ocean. The action by Greenpeace was short-lived after workers began spraying them with cold water from high-powered hoses and then threw pieces of metal down at them, according to Naidoo, who communicated via Twitter during the civil disobedience.

“This threat affects us all. In my home country of South Africa we are now facing a far more dangerous climate because companies like Gazprom and Shell are pumping money into politics and blocking clean alternatives so that they can extract the last drops of oil left,” Naidoo said after scaling the oil platform in Russia’s Pechora Sea. As a youth, Naidoo protested against apartheid in his home country.

“We’re here in the Arctic to draw a line in the ice and say ‘you come no further,'” he added. The activists said they had supplies to last several days, but abandoned the occupation on Friday evening when workers began throwing metals. The organization told The Moscow Times that “multiple pieces of sharp, rusted jagged pieces of metal were thrown at the activists from above” including one large piece that was swung on a rope. To date the company has not confirmed or denied Greenpeace’s account, but stated that operations were not stalled due to Greenpeace’s actions.

The action came as a part of Greenpeace’s Save the Arctic campaign, which is targeting oil companies like Gazprom and Shell. For its part, Shell may begin off-shore drilling in the American Arctic in a couple months time if final permits are granted.

Greenpeace is protesting the opening up of the Arctic for two major reasons: climate change and oil spills. The organization says that neither Gazprom nor Shell have an effective plan for dealing with a major oil spill in the remote and mercurial Arctic. Recently, the organization alleged that Gazprom’s oil spill response plan was actually expired.

Despite such concerns from Greenpeace and many other environmentalists, governments are pushing aggressive exploitation. While most Arctic governments see recent ice loss in the region due to global warming as an opportunity to exploit long-inaccessible, but rich fossil fuel deposits, Greenpeace views the ice loss as a warning of what fossil fuel-driven climate change has already wrought.

Sea ice loss in the Arctic has been surpassing even the gloomiest predictions by scientists. This season will likely set another record low, and some researchers now say the Arctic could be ice free within a decade or two, an event that probably hasn’t occurred in over two million years and could have major repercussions on global weather systems.

Over one-and-a-half million people have signed Greenpeace’s demand to establish a global sanctuary in the Arctic, much like what has been established in the Antarctic.

Shell running out of time to drill in U.S. Arctic – this year

(08/20/2012) The clock is running out for oil giant, Royal Dutch Shell, to drill controversial oil wells in the U.S. Arctic before the harsh winter sets in, reports the Wall Street Journal and Bloomberg. While the company is still optimistic it can reach the Arctic by summer’s end, it awaits a number of final permits after suffering numerous setbacks, including one of its drilling ships going adrift and nearly running aground in Alaska.

(05/01/2012) Greenpeace has announced that 20 of its activists, stemming from 13 countries, have locked themselves in an icebreaker ship in Helsinki, Finland. The ship is scheduled to move out to the Alaskan Arctic to aid in exploratory offshore drilling by oil giant Shell. Another icebreaker has already left for the U.S. Arctic; both have been leased to Shell by their owner, the Finnish government.